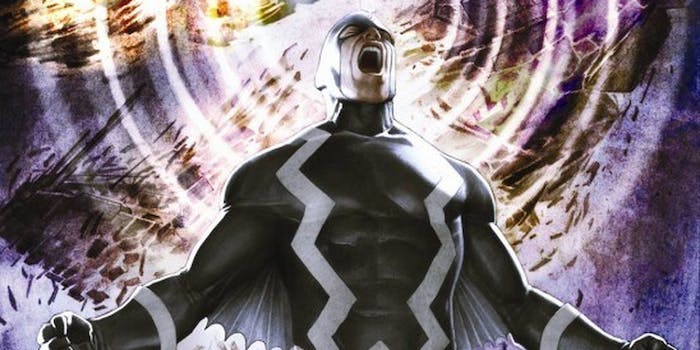 Marvel’s ‘Inhumans’ may have a completed script—and Vin Diesel

Fresh from his Guardians of the Galaxy turn as everyone’s new favorite talking tree, Vin Diesel turned heads earlier this week when he hinted at a role in another ensemble film, Marvel’s The Inhumans. Now movie news site Collider is offering more details about the project—still unconfirmed by Marvel.

Could Diesel be playing Black Bolt?

In May, the tie-in series Agents of S.H.I.E.L.D. namedropped the word “Kree” in passing, a reference that got everyone talking about whether the Marvel Cinematic Universe would be using the plotline of Inhumans to build its backstory. In the comic, which was created by Jack Kirby and Stan Lee, the Kree alien race visits earth and creates genetically modified superhumans. Although Marvel president Kevin Feige later denied the connection, he discussed the film as a possibility for “Phase Three” of Marvel Studio’s film rollout, which we now know officially extends to 2019, and unofficially, even further.

And it looks like Diesel was working on more than a hunch when he leaked the hint: Collider is reporting that the Inhumans property has a completed script penned by Joe Robert Cole, who like Guardians screenwriter Nicole Perlman is an alum of Marvel’s now-defunct screenwriting program.

Like Guardians, Cole’s script would probably be given a face lift by the future director; but while there’s no word on who that director might be, we can fill in a few more blanks on our own.

For starters, if Diesel is back in the Marvel game with Inhumans, there’s no better part for him than Black Bolt, the brawny king of the genetically modified race of Inhumans—don’t call them mutants!

Especially enticing is the fact that Black Bolt is a man of few words: he only speaks when he has something serious—and seriously badass—to say. Here’s how Feige himself described Bolt in a 2012 interview with Entertainment Weekly:

“The most powerful guy is the king who doesn’t say a word and if he does — lookout. That’s awesome. “

It would be a fitting switch for Diesel, who’s sitting pretty right now as the voice actor who stole the Guardians show by saying the same line over and over.

While Marvel has yet to confirm rumors about the Inhumans project, the franchise would open up numerous possibilities for the studio in terms of expanding its worldbuilding. Not only would they be able to have more aliens like Loki and Thor, but they’d also have the mutant superpowers they currently don’t, since Fox owns the rights to the X-Men. Plus, these aliens would be beloved superheroes like Gorgon and Medusa. And mutant powers in the Inhumans verse are distributed by something that sounds absolutely terrifying called the Terrigen Mist. Feige seemed excited about it. Diesel definitely seemed excited.

And that’s enough to get us excited.