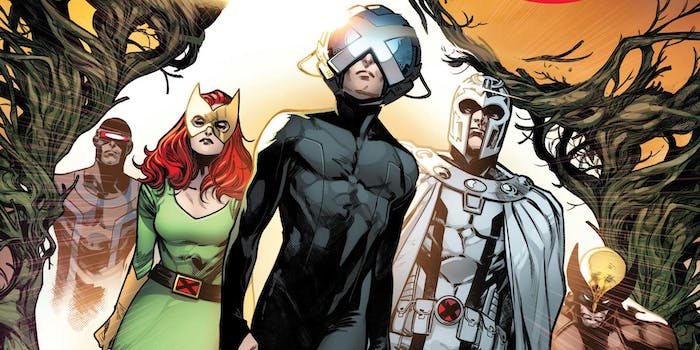 This new event storyline is a must-read for X-Men fans, a political epic with an intriguing new sci-fi concept.

After years of complaints about event fatigue, Marvel just launched an event comic that feels like a worthwhile standalone instead of an overhyped cash-grab. Created by writer Jonathan Hickman, artist Pepe Larraz, and colorist Marte Gracia, House of X assembles a massive cast of X-Men for a story that sees the mutant/human power struggle tip in favor of mutantkind.

The X-Men have always been an allegory for oppressed minority groups, so House of X’s concept is a significant change of direction—and potentially dicy on a political level, depending on how things pan out. In real life, bigotry often hinges on a belief that outsiders are supplanting the privileged majority’s way of life. That same anxiety inspires homophobic panic and anti-immigrant racism, and House of X posits a situation where this fear is founded in reality. Mutants are poised to outnumber humans on Earth, and as both sides attempt to handle the new status quo, some humans are treating it as an impending apocalypse.

Issue #1 reintroduces the Pacific island Krakoa, a quasi-sentient ecosystem that Charles Xavier and Magneto have claimed as a new mutant nation, echoing the legacy of Genosha. The island’s flora produces life-changing pharmaceuticals that Xavier will sell to human nations in exchange for political recognition, cementing Krakoa’s position. Magneto reigns triumphant in the new mutant motherland, while human diplomats are already on the back foot.

This info-heavy introduction is characteristic for Jonathan Hickman, whose last Marvel project was Secret Wars with artist Esad Ribić. Preceded by an interconnected Avengers/New Avengers arc with a colossal ensemble cast in multiple locations, you can already see the similarities. Hickman is interested in nation-building and diplomatic conflicts between mature, troubled leaders, exploring complicated stories with numerous interlocking parts. Some of these themes overlap with core elements of the X-Men franchise, but Hickman also has a rather chilly attitude to interpersonal relationships, meaning we’re unlikely to see much of the found-family soap opera that makes the X-Men so emotionally engaging.

House of X #1 leans heavily on (fortunately well-written) exposition and enigmatic speeches, interspersed with diagrams explaining the story’s political background, so it’s very much a case of “if you liked Secret Wars, you’ll love this too.” Personally, I do, because I’m the kind of person who recreationally reads books about the infrastructure of Star Wars. Either way, House of X already feels a cut above recent Marvel crossover events, many of which were either forgettable or (in the case of Nazi Captain America) deeply ill-advised on a conceptual level. It’s clear from the first few pages that House of X is a genuinely thoughtful book that inspires intriguing questions. For one thing, what led Charles Xavier to this seemingly drastic change of heart about human/mutant integration?

Xavier is often portrayed as manipulative and high-handed, but House of X sets him up as actively creepy. While Magneto delivers characteristically dramatic monologues about mutants being the new gods of Earth, Xavier is actually the more godlike figure, wielding tremendous power while lurking in the background. Issue #1 is basically a scene-setting exercise for Krakoa, told from several viewpoints that carefully avoid giving any insight into Xavier’s mind. Instead Pepe Larraz depicts him as an eerily smiling figure in a bulky helmet, pushing back against the popular image of Xavier as an avuncular professor in a tweed suit. Like, this exchange between him and Jean Grey? It’s the opposite of reassuring. (Interestingly, Jean is one of several characters Larraz draws in vintage superhero costumes, contrasting with the weighty, political tone.)

House of X is both intensely nerdy and totally accessible as a standalone sci-fi comic. There are plenty of deep cuts from X-Men canon (not to mention a chart explaining the Omega-level mutant classification system, thanks guys), but everything you actually need to know is there on the page. Googling the many D-list supporting characters is just an optional extra. The worldbuilding behind Krakoa is already interesting enough for me to look forward to issue 2 – although this being a Marvel event, that won’t simply be House of X #2, it’s actually the first issue of its companion comic, Powers of X. Thankfully each comic comes with a reading guide.