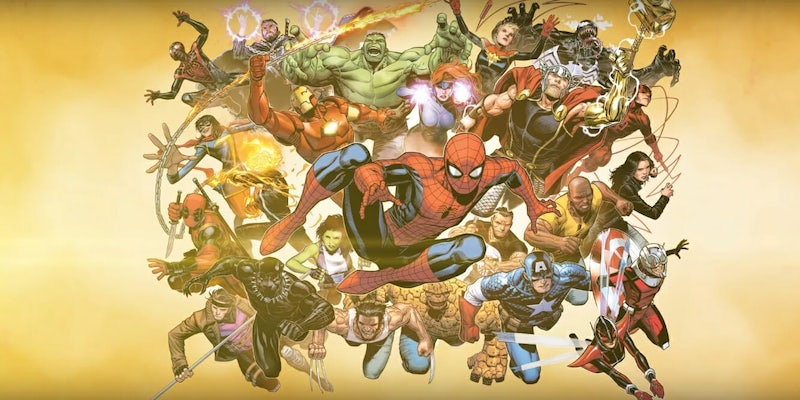 Marvel Comics promises a ‘fresh start’ with its latest relaunch

It's the fourth relaunch in four years.

Marvel announced the relaunch with a YouTube video on Feb. 20, featuring new editor-in-chief C.B. Cebulski. “Not since Marvel Now have we seen such an over-arching, line-wide change of talent,” Cebulski said, harking back to the halcyon days of, uh, 2012. Subtitled “A Fresh Start,” the video promises new titles, new creative teams, and “new directions” coming this May.

This video is noticeably low on detail, although Marvel has shared some tidbits of information elsewhere. IGN has a preview of the upcoming Avengers #1, with a creative team of writer Jason Aaron and artist Ed McGuinness. The cover art shows a team including the original Thor, Captain America, and Iron Man (as opposed to their recently rebooted counterparts), along with Captain Marvel, She-Hulk, and Black Panther.

As IGN points out, that “#1” is significant. Marvel’s last quasi-reboot took place in September 2017, returning some classic titles to their original numbering. For example, Amazing Spider-Man was suddenly on issue #789. This was meant to appeal to old-school fans, but it also caused some unnecessary confusion. Relaunching with issue #1 does indicate a fresh start – although it also comes with its own problems. In recent years, Marvel launched so many reboots that a few comics like Unbeatable Squirrel Girl had two first issues in a single year.

This relaunch isn’t a huge surprise since Marvel just went through two big changes behind the scenes. Cebulski replaced editor-in-chief Axel Alonso, and writer Brian Michael Bendis moved to DC comics, leaving a gap in several headline titles. This leaves plenty of room for a reshuffle among Marvel’s creative staff.

The two big questions now are how long the 2018 relaunch will last, and what the new creative teams will look like. Many readers are tired of Marvel’s constant reboots and crossovers, and hope for a period of stability. At the same time, there’s an ongoing debate over the publisher’s internal politics. While Alonso pushed for a more diverse slate of characters, he struggled to recruit diverse creators behind the scenes. He also oversaw the controversial HYDRA Captain America storyline, which was widely criticized for its treatment of neo-Nazi politics.

Those new creative teams offer an opportunity to hire more women and people of color. However, Marvel does send a certain message by announcing the relaunch with Avengers #1. A headline title like Avengers is an obvious choice, but it’s hard to miss the fact that it stars the original Thor, Iron Man, and Captain America, written and drawn by a white, male creative team. A single comic doesn’t necessarily reflect the publisher’s overall outlook, but it creates a certain image for C.B. Cebulski’s “fresh start.”