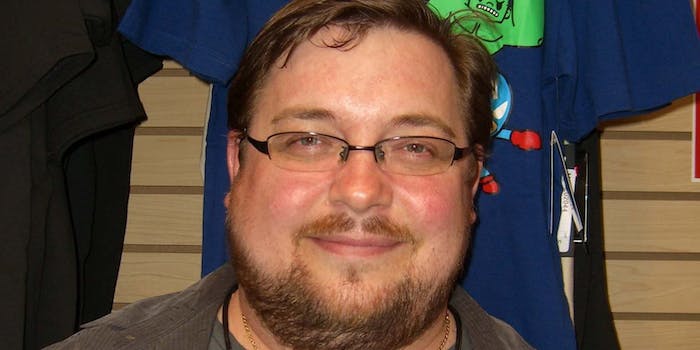 He invented a Japanese pseudonym so he could get paid as a writer and editor at the same time.

On his first day on the job, Cebulski quietly confirmed a persistent rumor about his career. In the mid-2000s, he adopted a Japanese persona to write comics like Wolverine: Soultaker and Thor: Son of Asgard, most of which involved martial arts or Japanese culture in some capacity.

Cebulski used the name Akira Yoshida, even giving interviews about Yoshida’s background in Japan. This added a facade of authenticity to Cebulski’s work, but there was another reason why he used a pseudonym. It allowed him to circumvent Marvel’s ethics policy, which banned editors from double-dipping as writers or artists. Posing as Yoshida, Cebulski could get paid as a writer on top of his regular editorial salary. “Yoshida” also had an obvious advantage against other new writers, because Cebulski could “introduce” him to the American comics industry.

Yoshida was long rumored to be a pseudonym, partly due to his bafflingly rapid rise in 2004 and 2005. He appeared out of nowhere (or, allegedly, Japan), published a bunch of comics without appearing at any public events, and then vanished without a trace. Some Marvel creators swore they’d met him, but the blog Bleeding Cool remained unconvinced. It published a post about the rumors in July 2017, which resurfaced when Marvel named Cebulski as its new editor-in-chief.

Every single Akira Yoshida comic was a barrage of ninja and samurai shit where every character was obsessed with "honor." From what I can tell, "honor" means anything from baking to murder. pic.twitter.com/n1RFxlQ1QU

In the days following the announcement of Cebulski’s promotion, more fans became aware of the Yoshida rumors. Many were critical of his choice of pseudonym, which arguably amounted to yellowface. Others wondered if Marvel knew Cebulski defrauded the company before they hired him as EIC. Then on Tuesday, Cebulski confirmed to Bleeding Cool that he was Akira Yoshida.

“I stopped writing under the pseudonym Akira Yoshida after about a year. It wasn’t transparent, but it taught me a lot about writing, communication and pressure. I was young and naïve and had a lot to learn back then. But this is all old news that has been dealt with, and now as Marvel’s new Editor-in-Chief, I’m turning a new page and am excited to start sharing all my Marvel experiences with up and coming talent around the globe.”

Like many comics industry scandals, this story arrived in two stages: the initial rumor, then a bungled attempt at damage control. Judging by this statement, neither Cebulski nor Marvel fully understood why people care about Akira Yoshida. Cebulski frames Yoshida as an embarrassing but worthwhile learning experience when it’s actually a textbook example of cultural appropriation shielded by white male privilege.

Marvel’s attitude to “Yoshida” proves that white male insiders can behave unprofessionally and still get promoted. He’s an especially stark example, because while Asian creators are still a tiny minority at Marvel, Cebulski got paid to write fake Japanese comics like this:

Yoshida wasn’t just a pen name; Marvel was paying for his Japanese “expertise.” In the words of Bleeding Cool‘s Rich Johnston, “Marvel executives I talked to at the time told me that Yoshida was a rarity. He was someone from [a] non-English speaking country who could write well for an American audience—something Marvel had struggled with in the past when seeking authentic voices.”

In reality, Yoshida was the living definition of cultural appropriation. Cebulski’s work played to an audience of white American fanboys during the mid-2000s rise of anime fandom in the U.S. He directly benefited from people believing he was Japanese, taking a job that could have been filled by a real Japanese writer.

By casually brushing this off as “old news,” Cebulski made the situation worse. He failed to display any understanding that he did something bad, simply saying he was “young and naïve.” In hindsight, this recent tweet feels more than a little ironic:

Breaking into, and staying in, comics, in any capacity, is just as much about attitude as it is about ability.

It’s astonishing that Marvel still doesn’t know how to handle this kind of controversy. They’ve certainly seen enough of them. In the past year, Marvel was widely criticized for its high-profile event comic Secret Empire, a clumsy political allegory where Captain America becomes a neo-Nazi. Then, at Marvel Studios, Iron Fist and Doctor Strange faced backlash for whitewashing Asian characters and using orientalist stereotypes. At the same time, Marvel struggled to reposition itself as a progressive employer with a diverse creative staff, hampered by moments like the executive who blamed a sales slump on female characters and “diversity.”

Promoted to editor-in-chief this month, C.B. Cebulski was meant to represent a fresh start for Marvel Comics. Instead, he’s already fallen at the first hurdle.