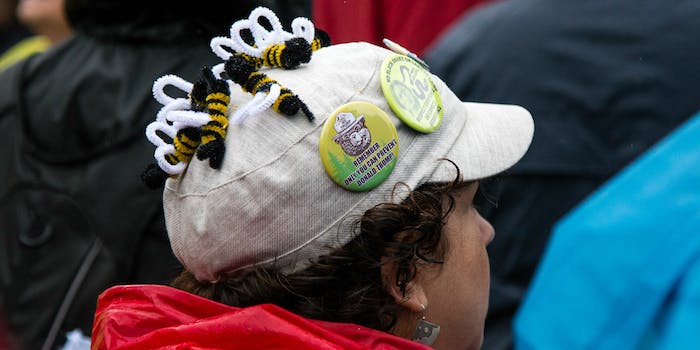 What you need to know about joining the March for Science

Everything you need to know, from the marchs start time to the philosophy behind the protest.

The March for Science is modeled on the Women’s March On Washington, which attracted millions of protestors around the country and about 500,000 in Washington, D.C. after President Donald Trump’s inauguration. This time around, people are protesting the rise of anti-science attitudes in U.S. politics, and rallying in support of scientists and their research.

Why are people protesting?

Many believe the Trump administration poses a direct threat to scientific research, slashing the EPA budget, cutting funding to educational programs, and hiring climate change deniers in high-level positions. The March for Science brings attention to the importance of scientific research in everyday life, supporting evidence-based policies for healthcare, education, and the environment.

On April 22, people all over the world will March for Science. Will you join us? https://t.co/JtSSEa6ino https://t.co/8t0apuBUKU pic.twitter.com/TYlaTWe8ib

The main march begins at 2pm on Saturday April 22, north of the Washington Monument in Washington D.C. You can find a map on the march’s website.

Before the march begins, the organizers have arranged “teach-ins” starting at 9am, and guest speakers at a rally from 10am onward.

How do I participate outside D.C.?

Like the Women’s March, the Science March will attract “satellite marches” across the U.S. and overseas. There are over 500 marches confirmed so far, with significant turnout expected in bigger cities. If you want to find one in your local area, there’s an interactive map on the official website.

What should I wear?

The organizers are encouraging scientists to wear their work clothes—scrubs, lab coats, field gear, safety glasses, etc. You can also opt for whatever is comfy and weather appropriate for your region. Just be sure to wear comfortable and supportive shoes if you plan to be on your feet for much of the day. (And yes, there’s a knit hat called “resistor beanies” for the occasion.)

What should I bring?

Lots of marchers are bringing signs and banners in support of science. You can get creative with your personalized message, or you can download and print signs. You can find some free options here. You should also considering packing a light bag with things like a water bottle and sunscreen.

Will the march be accessible to people with disabilities?

The organizers have worked to ensure that the events associated with the Washington D.C. march are accessible. If you have questions about accessibility of a satellite march, contact your local organizers. Anyone who is unable to join the march for any reason can still participate in a virtual march that will be livestreamed at marchforscience.com. You can also share your support and stories on Twitter with the hashtags #MarchForScience and #ScienceMarch.