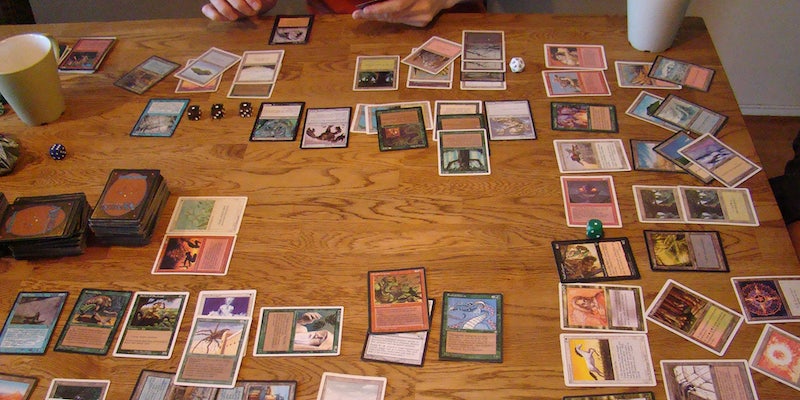 The enduring, cult appeal of ‘Magic: the Gathering’

Counterfeit cards? Three-figure trades? I had never seen anything like that before.

The following is an excerpt from A Brief History of Magic Cards, a new book exploring the the real-life, human history of Magic cards, currently being funded on Kickstarter.

Magic is often called a “children’s card game,” and in its youth the game—like many of its players—was a child prodigy. Its steepest growth arose from an uncertain environment, devoid of precedent and unbounded by genre. Magic has always been mind-blowingly expensive to play—$1,000 a year is a small expenditure for a serious tournament player—and old Magic cards were expensive then and more so now. A sealed pack of Arabian Nights cards retails for $450. Antiquities costs $80, and Legends costs $83.

The workplace that made these hits—Wizards of the Coast, in the early ’90s—was equally uninhibited, like a dot-com startup from the same era. There is an excellent Salon article about it, a rare first-hand account of those halcyon early years. In a world where Magic writing is mythology, this article is as rare and valuable as a spellbook written in blood on parchment, or an old Magic card representing it. The author, John Tynes, was an early Wizards employee, and he discloses enough prurient information to make it worth anyone’s time.

When I was a kid, this was far outside the limits of my imagination. The way I experienced Wizards’ fantasy was through the flagship store, which Tynes describes thusly:

It included a gaming store, complete with life-size statues of characters from Star Wars and Magic; a video arcade populated by panhandling street kids who looked like extras from Blade Runner; a virtual reality gaming area with climb-in cockpit pods for networked giant robot battles; a Planet Hollywood-style restaurant, Dalmuti’s, decorated in a gaming theme; and in the massive basement, a sort of community center for gamers stocked with tables, chairs and the kind of plush curtains and heraldic banners suited to an Errol Flynn movie—or dinner with the kids at Medieval Times.

The article’s title is “Death to the Minotaur,” and the massive relief of the card Hurloon Minotaur that dominated the wall above the basement’s entrance loomed large in my childhood mind’s eye. Above it was the bright, family-friendly overworld, where we bought cards, ate overpriced hamburgers, saw the sights. The networked robot battles were a rare treat, reserved for birthdays, and didn’t work very well—though they did work well enough that the birthday boy’s dad would always get last. When the pods began to break down, employees had to scrabble about to keep them standing; there were no replaceable parts for “BattleTech simulators.” Fantasy and sci-fi are valuable genres because they literalize metaphors. True to fiction, the BattleTech simulators were literally held together with gum.

The heart of the flagship store was the dungeon, beneath the Minotaur. It was something new—a community center for gaming—and if that wasn’t special, in 1998, I don’t know what is. It was there I saw my first Black Lotus, then worth a whopping $450. (In the ensuing years, it has shot up to $10,000, well outperforming any stock index.) At the same time, I saw an expert come over and pronounce the Lotus a “fake Flower.” Counterfeit cards? Three-figure trades? I had never seen anything like that before.

The scamps my age who hung out there saw it all the time: This was their world. In old New York, there was a thriving subculture of underground card rooms; kids who worked there, for their fathers, would become prodigies, maybe grow up to win the World Series of Poker Main Event, or take eight figures off Vegas casinos by counting cards at blackjack.

Counterfeit cards? Three-figure trades? I had never seen anything like that before.

This is the closest I would ever come to that. I didn’t even participate; watching was enough. That the guttersnipes could be there by themselves, playing games of Magic, with expensive cards, for high stakes—any one of those was thrilling; all of them at once blew open my innocent mind.

Garfield’s original pitch distilled it best: as the first collectible-card game (“CCG”; or, interchangeably, trading-card game, “TCG”), Magic hybridized the play of card games with the collectability of baseball cards. You couldn’t profit off the eight of spades, nor play a game with rookie Barry Bonds, until Magic. The business model and the gameplay were wedded from the get-go, and so Wizards reaped the rewards of getting players to pay continuously, to acquire new cards. Two decades later, we’d start calling these “microtransactions”—or a “subscription-based model.” Back then, Magic stood alone.

With its pay-to-play game, Wizards had struck gold. With Arabian Nights, Antiquities, and Legends, the number of subscribers—and the amount of money each one spent—grew and grew and grew. But it wasn’t sustainable; with Fallen Empires, Magic faced its first real business challenge since its debut, at Origins 1993.

Today, boosters of old sets are, as a rule, prohibitively expensive: $450 for Arabian Nights, $80 for Legends or Antiquities. By contrast, a pack of Fallen Empires, printed later in 1994, costs $3.29. Even by the standards of the time, the set was a disaster. And some of Wizards’ business decisions were even worse.

There were several reasons Fallen Empires was an artistic and commercial failure. Its “flavor” (war, ruins; evoked by illustrations, card names, game mechanics, and text) was too drab; the cards looked boring, and were boring to play with. Its print run was too big. And almost all of its cards were too weak to be viable in tournament play—which was, just then, beginning to coalesce and fuel the secondary market. The high supply of Fallen Empires depressed an already-low demand: nobody wanted to buy cards that were worth nothing, which made the cards worth even less. Game stores suffered. Players said, for the first time and not the last, that they were quitting, and that “Wizards had ruined Magic.” Wizards was now face-to-face with the difficulty of running an artificial economy. So they responded with an even bigger mistake: Ice Age.

Ice Age, intended to reboot the game by introducing radical new mechanics, complicated new cards, and a completely different, “snow-covered” setting, sucked even more than Fallen Empires. Its cards were even more complicated than Fallen Empires’, and even more useless; its cold-weather theme, only a year before A Game of Thrones, wasn’t enough to make up for the poor game design. Only two years in, Wizards no longer understood the game it had made. Each successive attempt to reverse-engineer the miracle of Alpha exposed the need for a new direction. Homelands, released four months after Ice Age, in October 1995, was even worse, and brought Wizards to the brink of financial ruin.

Magic hybridized the play of card games with the collectability of baseball cards.

The popular lore of Magic holds that Alliances (1996) saved Magic, which is not untrue. But two more innovations coincided to solidify its position.

The first was the introduction of grouping sets into “blocks”: three consecutive releases that shared a continuous storyline, and played well with one another. The first two blocks, Mirage (1996-7) and Tempest (1997-8), featured powerful new cards and high-fantasy narratives that led my possessed imagination to catalogues of card prices, tournament-winning decklists, and strategy-oriented Internet forums—the emerging secondary market that buttresses Magic’s popularity to the present day. Magic now is a much better game than it was then, but I look back upon Mirage and Tempest and know their art and writing, inseparable from the role-playing element, will never be surpassed.

The second innovation was the Pro Tour.

According to John Tynes, author of the magnificent Minotaur article, Peter Adkison “had a vision for a new kind of company, a company that could change the corporate world forever,” by empowering nerds. It was in this spirit that Wizards started the Pro Tour (PT). Then, Wizards was a different kind of company, and the Pro Tour was the most prestigious event in all of gaming. Twenty years later, Wizards is a subsidiary of Hasbro, and the spirit of the tournament—now one of many such events in competitive gaming—has changed in the same way.