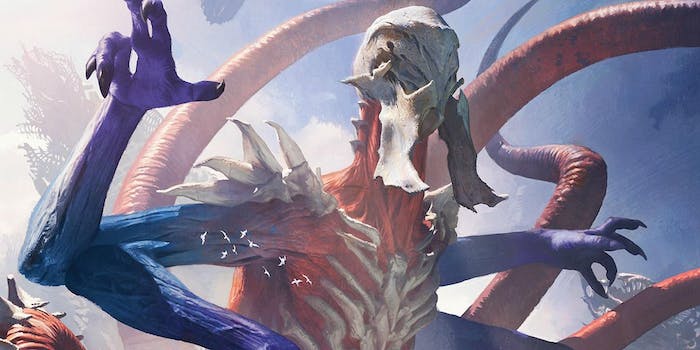 A guide to the best new cards in the Magic: the Gathering expansion Battle for Zendikar

There are 274 new cards. Here are the best of them.

If you haven’t had time to flip through Magic: the Gathering’s newest and most creepy expansion, Battle for Zendikar, we’re here to help. There are 274 new cards to check out, so we found some of the more powerful ones to give you a leg up on your opponents.

From a lore standpoint, the set is highlighted by a return to the world of Zendikar, originally featured in a 2009 set of the same name. Back then, players, or “planeswalkers,” ventured the plane and witnessed the accidental release of the Lovecraftian Eldrazi—faceless titans intent on devouring the world.

But Zendikar ended in defeat for the planeswalkers, as they abandoned the world to seek solutions to the Eldrazi threat off-planet. Now they return to Zendikar to finish the fight.

The cards of the set similarly mirror the two sides of the battle. The grotesque Eldrazi are powerful and use unusual mechanics to conquer their foes, such as “ingesting” and “processing” their opponents cards, or sacrificing minor Eldrazi “Scions” in order to bring out larger monstrosities.

Opposing the Eldrazi are the Allies of Zendikar, a hodge-podge mix of survivors—humans, elves, goblins, angels, giants, even vampires—all staging one final stand against certain annihilation. Allies work by powering up all of their player’s creatures when they are played, but also whenever other Allies are played. The basic idea of an Ally deck is similar to Voltron: The more you plug in, the better it gets.

Zendikar was also closely related to “land-matters” design, and Battle for Zendikar similarly has a large focus on land cards. Not only does the set revive the Landfall mechanic, which triggers whenever a land card is played, but it also features many useful common and uncommon land cards. And as a special addition to the set, extremely rare “Expeditions” can be found—reprints of some of the most powerful (and expensive!) land cards ever.

So let’s take a look at the best of the lot. 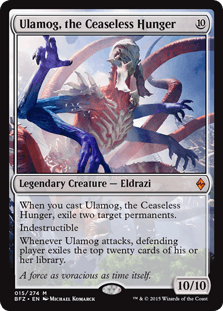 The most powerful card of the set is, without a doubt, is the colossal Ulamog, the Ceaseless Hunger. As a 10/10, it is one of the largest creatures in the set, but his additional abilities are much more threatening. Simply casting Ulamog lets a planeswalker wipe two threats off the board, and when it attacks, the defender has to remove a third of their deck from the game. 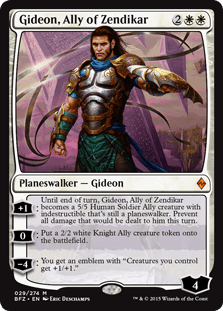 Opposing Ulamog and its Eldrazi horde is Gideon, the leader of the Allies. As a planeswalker he brings multiple abilities to the table, including the option of just plowing into battle himself. But his “ultimate” ability (the bottom one) is undeniably his most powerful, since “emblems” are permanent rule changes to the game that can never be removed by opponents. Making all of your creatures more powerful for the rest of the game is a great way of securing victory. 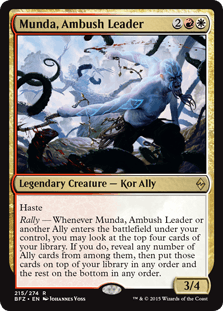 Munda, Ambush Leader, is one of Gideon’s lieutenants. In terms of gameplay, it is likely the most important Ally in the set. His power level alone is far from stellar, but his “rally” ability is critical to any Ally deck. Simply put, he gives you a steady stream of Allies to play for the rest of the game. If Allies are like Voltron, Munda is definitely the black robot lion that all the rest plug into. 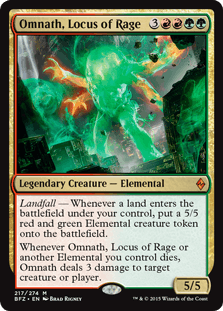 A returning character from the original Zendikar, Omnath represents the will of the planet. Here, he is the penultimate card featuring the Landfall mechanic. In simple terms, every time you play a land, you get a 5/5 creature. Because certain decks are built to play multiple lands on a single turn, Omnath can quickly flood the board with his elemental buddies, ensuring victory. And with the additional upside of firing off 3 damage whenever any Elemental dies, Omnath, Locus of Rage, is basically unstoppable in the right deck. 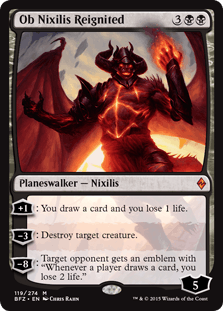 At the opposite end of the spectrum from Gideon is Ob Nixilis Reignited. A demonic planeswalker, Nixilis has been trapped on Zendikar for millennia, but used the war between the Eldrazi and the Allies to fuel his own dark purposes. With his “spark” reignited, he’s on the loose to wreak havoc, and his three powerful abilities have players drooling. 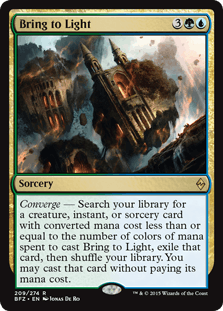 One of the more interesting cards introduced in Battle for Zendikar is Bring to Light, which makes use of the Converge mechanic to cast spells for free from your deck. While players were initially uncertain of how powerful this card would be, a dedicated deck utilizing all five colors of mana to cheat expensive cards onto the battlefield recently took fifth place at a tournament. Expect this card to make waves. 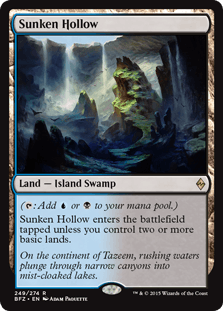 Sunken Hollow is one of five powerful and rare lands featured in Battle for Zendikar, dubbed the “Battlelands.” With the ability to create two different colors of mana immediately if players can meet certain conditions, these Battlelands are going to see play in almost every competitive deck. And for decks like the above one featuring Bring to Light, they need all five.