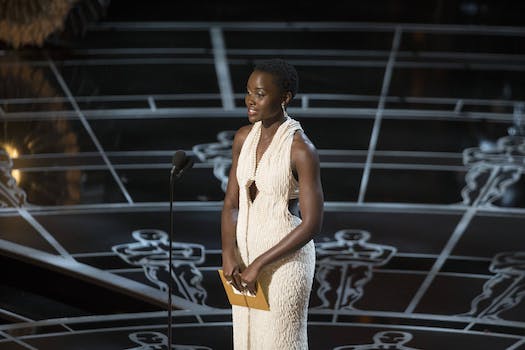 Lupita Nyong’o is in talks to star in ‘Black Panther,’ and fans are freaking out

Let this be true!

Lupita Nyong’o already joined that galaxy far, far away, but now it looks as though she’ll soon have the Marvel Cinematic Universe under her belt.

According to the Hollywood Reporter, Nyong’o is in talks to star in Black Panther alongside Chadwick Boseman, who debuted as T’challa in Captain America: Civil War. Creed director Ryan Coogler is set to direct.

Although Marvel has yet to officially confirm the news, the sheer possibility of a Boseman/Nyong’o/Coogler-led Black Panther is enough for many fans online to start celebrating.

JUST THINK ABOUT THIS MOVIE

ABOUT AN AFRICAN KING

NO SLAVERY OR CIVIL RIGHTS ERA SHIT IN SIGHT

Ryan Coogler directs a #BlackPanther movie with Chadwick Boseman and Lupita Nyong'o based on his screenplay… Let that sink in.

You know who is probably great to work with? Lupita Nyong'o. I mean, Disney wouldn't re-hire an actor for 5 films in a row if not.

I am on board 100% with Disney's growing effort to put Lupita Nyong'o in every one of their new movies. https://t.co/YMAltSpRhK

Hint to filmmakers: if you also add Danai Gurira to #BlackPanther, I'll go camp out in front of my local theater now pic.twitter.com/g9Crjf3n43

It’s unknown which character Nyong’o will play in Black Panther, but The Hollywood Reporter said she would be the Black Panther’s love interest.

The Black Panther movie has decades of story to pull from, as well as the current run by Ta-Nehisi Coates, so there are a few possibilities as to which character Nyong’o could portray in the movie.

So other than Storm (which is a no) and Monica Lynne (which could be possible) could @Lupita_Nyongo be a new love interest for T'Challa?

For instance, she could play a member of the Dora Milaje, the group of bodyguards who protect T’Challa and the ruling family of Wakanda; we saw one of them with T’Challa in Civil War. Birth. Movies. Death’s Devin Faraci mentions Okoye as a possibility. (Or even a Dora Milaje from Coates’s run.)

Monica Lynne, a jazz musician who is in an on-and-off relationship with T’Challa, could be another possibility; they were even engaged at one point. But that might require some fleshing out by Coogler. Nyong’o wrote in an essay for Lenny Letter last week that she’s not interested in playing a one-note character and wants to participate in developing the roles she chooses.

“I think sometimes a singular catharsis can be found in genre storytelling—as I found when playing a thousand-year-old woman (Maz Kanata in Star Wars: The Force Awakens) and a wolf mother (Raksha in The Jungle Book),” she wrote. “I’m able to be more engaged in roles such as those than I would be in playing ‘the wife’ when she is written with no motivation or singularity.”

Some are hoping that she’ll play Monica Rambeau, a superhero known as Spectrum who at one point went by Captain Marvel—something that would probably be left out with Carol Danvers’s Captain Marvel set to star in her own movie in 2019.

T’Challa’s best known love interest by far is Ororo Munroe, which fans will know better as Storm. But bringing her in would present its own problems. Fox owns the movie rights to her, not Disney and Marvel Studios, so Marvel wouldn’t be able to just place her in the film. It’s not impossible, seeing how it was finally able to bring Spider-Man over to the MCU, but Fox already has successful film franchises with X-Men and Deadpool so there is likely less motivation to share one of its characters with Marvel.

Still, just imagine what could be.

Whoever it is, we know we’re already on-board.