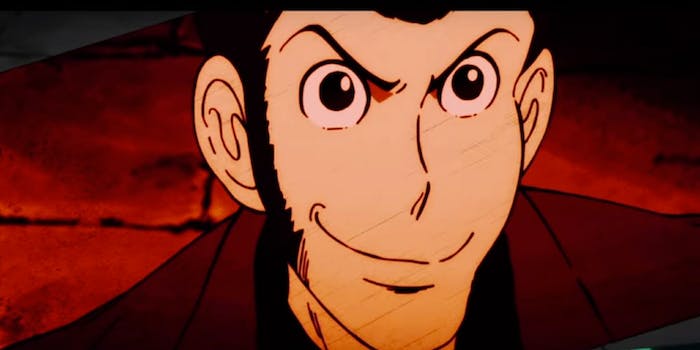 After three decades, Japan's favorite gentleman thief is finally back.

The first trailer for the new reboot of the popular anime franchise features the series’ famous opening theme and shows the whole gang back in action—plus a look at a new character, Lupin’s wife, Rebecca:

Text: My name is Lupin III
Lupin: I’m stealing back what’s already been stolen, that’s all.
Jigen: Word of advice, pointing a gun at me is…
Goemon: Until I’ve paid back my debt, I will protect you.
Fujiko: Which do you prefer?
Zenigata: I won’t let you get away until I die, Lupin!
Rebecca: Because I’m your wife! I’m Mrs. Lupin!
Lupin: Lupin III
Lupin: I’ll take what I claim!

The original gentleman thief, Lupin, was created by French writer Maurice Leblanc as a character for Sherlock Holmes to do battle within the turn-of-the-century parody novel Arsène Lupin versus Herlock Sholmes. His character was so popular with readers that he became a hero in his own right and spawned many other books. The Lupin mythos has spawned countless cultural adaptations, including a second series decades later by another French writer, Boileau-Narcejac.

In 1967, a Japanese manga writer by the name of Kazuhiko Kato took the pen name Monkey Punch to begin the story of a character he called “Lupin III.” Lupin the Third was Lupin’s grandson, a happy-go-lucky thief living in Italy who, like his grandfather, forms his own gang of modern-day thieves.

Lupin III has proven to have tremendous staying power in Japan, with the original series running for 5 years and spawning an endless series of spinoffs and remakes. Yet despite the recurring popularity of the character, the new series will be the first time the character has returned to his own anime series since 1985. The new series follows last year’s live-action film adaptation. Long-time Lupin III animator Kazuhide Tomonaga will direct for TMS Entertainment.

The 24-episode series will have its world debut on Italian television Saturday, Aug. 29, before debuting in Japan on Oct. 1.