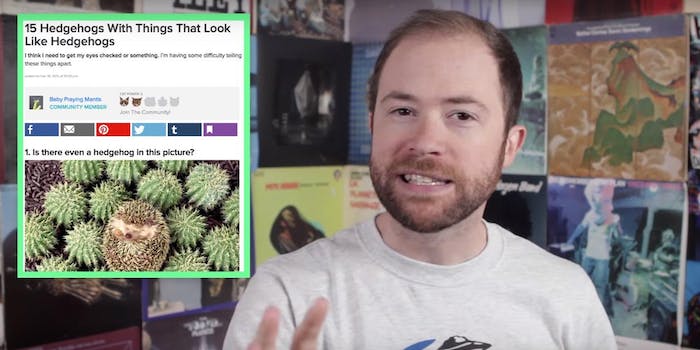 Breaking down the psychology, history, and art of the oft-maligned listicle

Pithy, high on GIFs, low on intellect, it’s a bit like mindless snacking—literally.

The listicle is probably as fun to read as it is fun to hate on. Pithy, high on GIFs, low on intellect, it’s a bit like mindless snacking—literally, according to the hosts of PBS Digital Studios BrainCraft and Idea Channel.

Vanessa Hill, paying a visit to Mike Rugnetta on Idea Channel, says that research suggests we seek out information in a way similar to how we seek out food. When we get that information, we get that little squirt of dopamine in the reward system in the brain.

Rugnetta also points out that listicles are not new nor unique to the Web. Though they’re well suited for our information-hungry brains, informative lists date all the way back to the 19th century. Those were about the fates of the apostles, lifespans of animals, and “facts worth noting,” Rugnetta says.

The appeal goes beyond simple psychology, he argues, because there’s a certain amount of authority conferred by putting things in lists. The writer is saying that of all the things in a certain category, these are the ones you should know about.

But, as Hill says, that’s probably not worth that much since you probably don’t remember many items on those lists either. She says that we rarely do anything with the information presented in a listicle, so we forget it quickly.

Speaking from behind the curtain, listicles are an easy way to generate clicks. They’re also fun to write. (Both Hill and Rugnetta made our own “best science shows of YouTube” list a while back.) But if they get people to the website then maybe they, once there, will see something more substantive and click on that.

But, as they both said: The listicle is here to stay, and it’s been here a while.