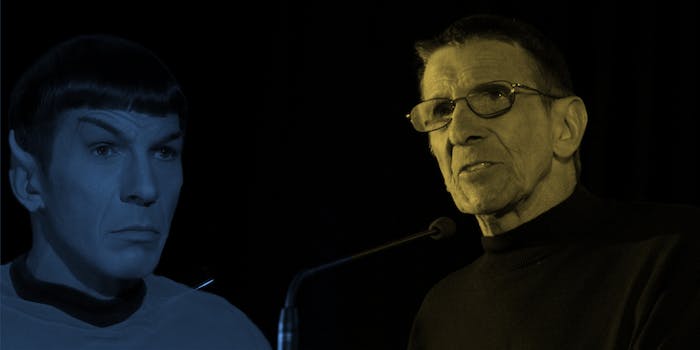 Leonard Nimoy was beloved as Spock—and so, so much more.

Losing a friend is a time to take stock, and recognize what the person meant to us.

It seems perfectly fair to describe Leonard Nimoy as a friend to all the imaginative people he inspired and nurtured, even if he’d never met them. Nimoy’s performance as Spock lent gravitas to a 1960s science fiction show that easily could have been dismissed as pure shlock. Instead Star Trek grew into a phenomena that helped so many people explore their identities as outsiders trying to be true to themselves, while also working within the culture around them.

Nimoy’s legend will forever be linked to the Star Trek role that defined his career. But as much as he was loved for being Spock, he was also appreciated as a man who advocated for science and embraced fans. He transcended the boundaries of sci-fi fandom, and became a fixture of popular culture.

Anyone who grew up in Boston, or visited the city as a kid, probably took a visit to the Mugar Omni Theater at the Museum of Science. It’s still one of the largest screens in or around the city. Nimoy contributed to the warm-up show by helping with the sound-test for the theater’s immense speaker system. As he says in the intro, Nimoy grew up just a few blocks away from the theater.

Did you know that Nimoy was a singer? He worked with both sci-fi themed tunes and pop standards. His lip-synced performance of The Ballad of Bilbo Baggins on a 1960s variety show is a cult classic. You see Nimoy’s playful side, here, and that’s one way we’d like to remember him.

Before the X-Files or Fringe, Nimoy was the host of a late 1970s television show called In Search Of, that explored the paranormal. If you were a little kid watching In Search Of, you probably thought it was pretty creepy. Nimoy’s presence was grounding, and familiar. It felt safe.

“Grounding” might be a good way to define lots of Nimoy’s television appearances. The more his presence as a beloved geek culture icon grew, the more his cameos on a television felt like a nod of recognition to the show itself. Like when Nimoy showed up in the fourth season episode of The Simpsons, “Marge vs. the Monorail.”

Or when Nimoy appeared on Futurama. It was yet another opportunity to appreciate his sense of humor and good nature. You know, making fun of the fact that the Vulcan neck grip is probably worthless.

Nimoy provided the voice for Galvatron, in Transformers: The Movie. You remember Galvatron, right? The Decepticon who finally got sick of listening to Starscream’s lip and decided to put the upstart in his place?

Hearing Leonard Nimoy’s voice, unexpected, was always something to get excited about. Seaman is one of the weirdest console games ever made. It was published for the Sega Dreamcast, and came packaged with a microphone that plugged into the controller. The goal of the game was to figure out what you had to say to the Seaman in order to make him grow.

When you investigated the technology tree in Civilization IV, each entry included a related, audio quote. Three entries from the top…

And of all the things we can celebrate about Nimoy’s life, one of the happiest may be that he never lost his relevance as a cultural icon, and especially not as a central figure in the geek world.

Nimoy voiced Sentinel Prime in Transformers: Dark Side of the Moon. Now, we tend to look at the Michael Bay Transformers movies as abominations, but can honestly say that Nimoy appeared in what might be the best one. That’s not saying much, but still, we’re glad Nimoy was there.

He played a brilliant and mysterious scientist named William Bell in the sci-fi series Fringe. During the first season, the main characters often spoke about Bell as if he were some sort of myth. Bell’s reveal at the end of the first season sets up the existence of a parallel reality (demonstrated by the Twin Towers still standing in New York). It’s one of the best moments throughout the show’s five-season run.

Nimoy never lost his sense of the playful, and never failed to be able to make us smile. Here’s his cameo on The Bing Bang Theory. How do you not love Nimoy portraying a Spock action figure?

His appearance in the J.J. Abrams Star Trek reboot films tied the new to the old and closed the circle. The last video we want to share with you is Nimoy again acknowledging the audience with a wink, in this Audi commercial with Zachary Quinto where the master acknowledged the inheritor of his most beloved role.

Eventually, we have to say goodbye to everyone we love, and it’s always too soon. Let’s celebrate that Leonard Nimoy left us with so much to cherish, such that he will never be forgotten. Not if we all have anything to say about it.