There are delights around every corner of Lego Batcave Break-In

This set could hint at what's coming in 'The Lego Batman Movie.'

Remember when movies were movies and toys were toys and comic books were comic books? No? Me neither. Everything is so blended together into one giant “transmedia” jumble these days that it’s not easy to determine where one medium stops and another begins.

The new Lego Batcave Break-In takes this to a mind-bending new level. It’s a toy based on a movie that was itself based on toys and also on comic books. Video games fit in there somewhere as well, but that’s another can of worms.

The Batcave Break-In is doubly unusual because it’s tied to a film, The Lego Batman Movie, that isn’t coming out until February. As such, it’s hard to judge whether the set really has much to do with the movie or whether Lego’s designers are merely having some fun with the property.

Either way, there’s a ton of fun to be had. After decades of grim-and-gritty portrayals in movies and TV shows, the Caped Crusader is absolutely ripe for parody, which is what made Will Arnett’s sarcastic take on him in The Lego Movie (2014) so great.

Sure, he still had the gravelly voice, but the whole image of the Dark Knight was very much played for laughs. Arnett’s Batman insisted on building only with black or dark gray Lego bricks while also blasting his own theme song in the Batmobile, complete with self-indulgent lyrics: “Darkness! No Parents! Continuing darkness!”

The parody was such a hit that The Lego Movie’s producers decided to make Bats the star of a follow-up. The upcoming film reunites Arnett with his Arrested Development co-star Michael Cera, who plays Robin. Zach Galifianakis and Rosario Dawson also come on board as The Joker and Batgirl, respectively.

If the trailers are anything to go by, it’s looking like the Batman mythos is in for an even sharper skewering this time around.

The Batcave Break-In, meanwhile, hints at some of the jokes that might work their way into the movie. 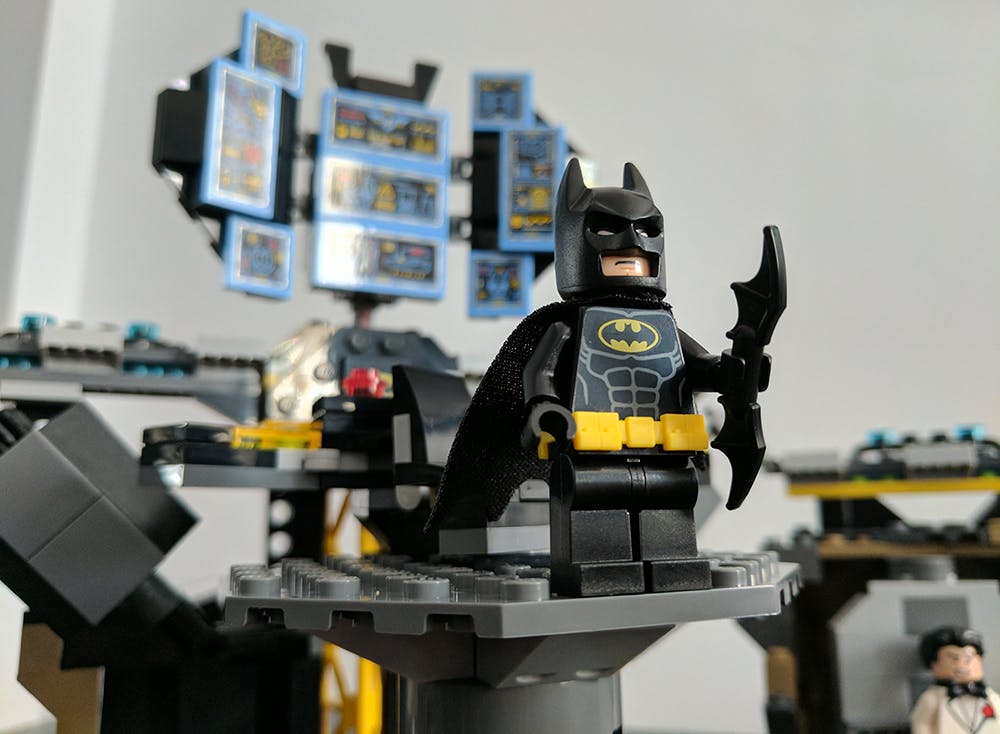 The 1,047-piece set, selling for $99, effectively comes in three parts: the Batcave itself, the Batboat, and the Penguin’s rubber ducky vehicle.

The duck is an obvious callback to Batman Returns (1992), Tim Burton’s second stab at the character. Burton gets much credit for rehabilitating Batman’s image with mainstream audiences, who remembered the campy 1960s TV show that saw Adam West share the screen with colorful “Zing!” and “Boof!” sound effects.

But Burton didn’t completely turn his back on camp. His interpretation of the Penguin, played with psychotic zeal by Danny DeVito, had a thing for the cartoonish too. His amphibious duck vehicle was laden with weapons, as were his army of trained penguins. 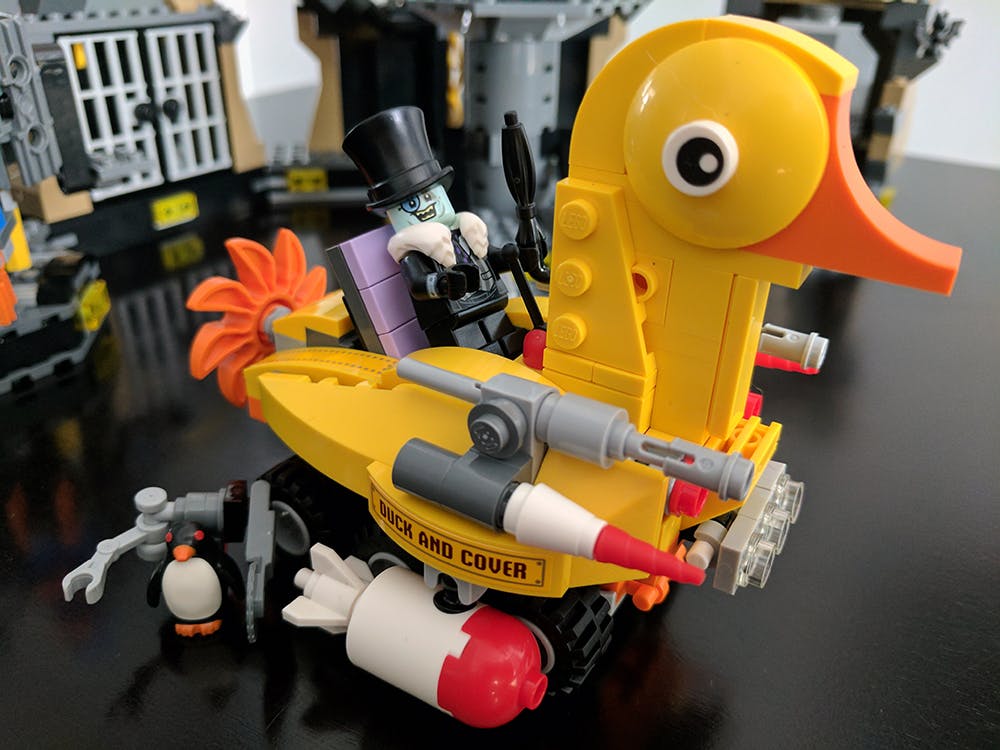 Both are an integral part of the Batcave Break-In—the penguins sport backpacks with buzzsaws on them—and it will be a shame if they don’t figure into the movie somehow.

The Batboat is a surprisingly straightforward affair, with the only possible zinger being the name inscribed on its side: “Riptide.” As far as I can tell, that might be a reference to one of the Joker’s henchmen in the 1960s TV show, in which case it’s a really obscure punchline.

The cave itself has some more obvious laughs packed into it. The central computer console, for example, sits in front of a giant bat-shaped monitor bank. It’s important, after all, that everything in Batman’s arsenal be fashioned into the shape of the bat, just so there’s no mistaking.

To the right of the console sits a chamber with a spinning wall—the sort made famous in haunted house movies. This way, the Bruce Wayne mini-figure, complete with tuxedo, bow tie and champagne glass, can quickly change into Batman. 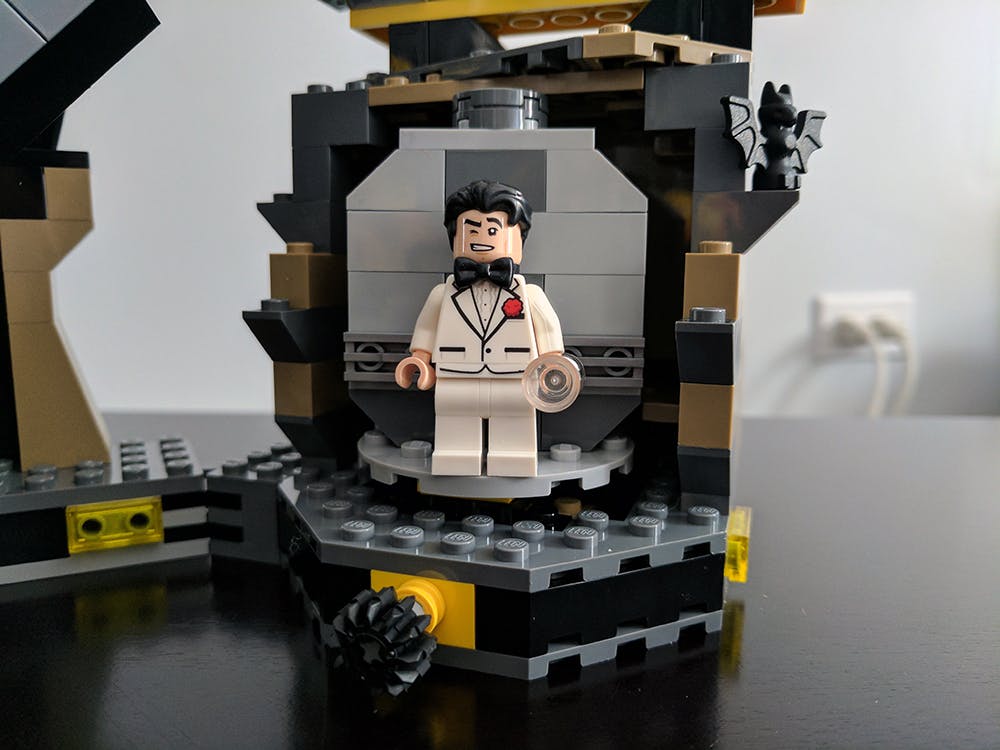 The cave’s main attraction comes in the form of its left-most section, which features a jail cell and costume rack. The cell’s back wall collapses, making for convenient jail breaks, while the dry-cleaner-like rack—used for displaying various Bat-suits—is turned with a knob.

The included suits are funny stuff and intriguing if they actually figure into the film. The Raging Bat suit, with its boxing gloves and yellow shorts, is a clear reference to Raging Bull (1980), the boxing movie that won Robert De Niro a Best Actor Oscar.

The Scu-Bat suit, with its breathing tube and diving flippers, has obvious uses but the Bat Pack suit raises questions. The gold tuxedo and associated microphone suggest Dean Martin and Sammy Davis Jr. What exactly does this have to do with Batman? With luck, the movie will explain. 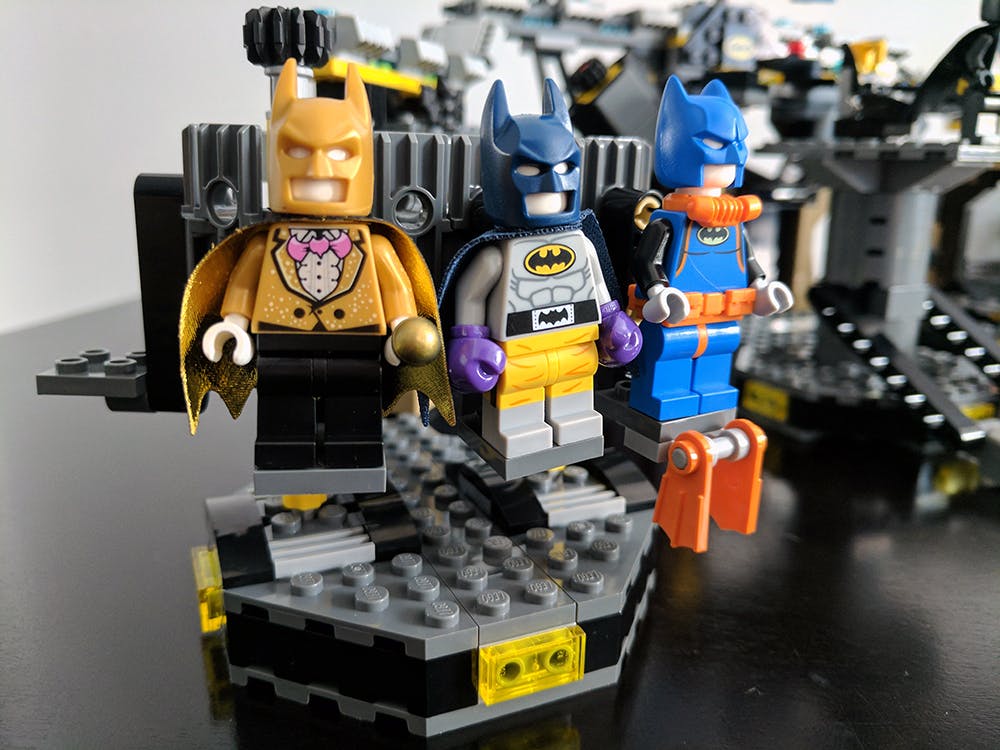 It’s worth noting that Lego is really upping its game with mini-figures in this set. Whether it’s Alfred’s bow tie or Batman’s utility belt, all four of the main characters included have new, separate accessories that would have been painted on in previous incarnations. It’s clear the designers are increasingly putting more effort into the characters’ details.

All told, the Lego Batcave Break-In is considerably smaller than the classic TV show-inspired Batcave released earlier this year, but it draws from the same humorous well. If you like your Batman funny as opposed to dark, this might be the best way to build the Dark Knight.