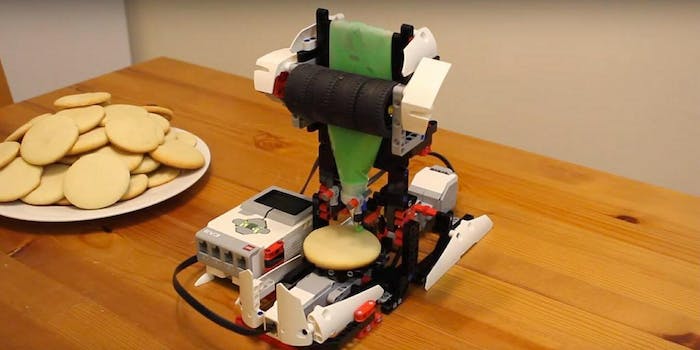 Holiday cookies are great, but a Lego machine designed to perfectly decorate your those cookies? That’s just icing on top—literally.

If you’re not a decorating pro, icing your cookies might end up being more of a challenge than you ever imagined. Luckily for us, Jason of J.K. Brickworks—who previously made the Lego Sisyphus kinetic sculpture—put together an icer made with a Lego Mindstorms retail set that easily does the job for you.

Jason included instructions so that anyone can make their own cookie-decorating robot, along with a number of holiday-themed patterns that are sure to spice up your cookies.

But be warned: You’ll probably get icing everywhere the first few times you run it, so you might want to conduct a few test runs before you bring them out.

The machine is a pretty huge investment for the upcoming holiday season—especially with Christmas nearly upon us—but you can easily build and perfect it for next year’s batch.