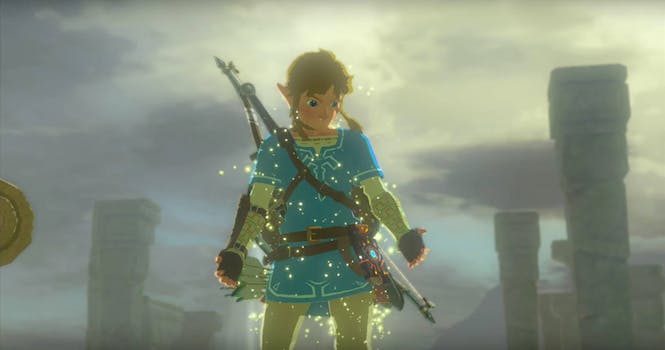 New Legend of Zelda: Breath of the Wild gameplay footage debuts at the Game Awards

The new gameplay shows some interesting departures for the franchise.

We know we keep saying this, but Legend of Zelda: Breath of the Wild looks so incredibly beautiful.

Nintendo debuted two new gameplay teasers for the long-awaited next installment of the franchise Thursday night at the Game Awards.

The first clip dropped during the preshow festivities. It’s short—just 86 seconds—but it gives us a peek at Link and the vast open world fans have been dying to explore. We get a look at what could be Link’s home village, monsters he battles, lush landscapes, and dark ruins.

Link’s horse Epona seems to play an important role in the game, both as a source of transportation and in battle. We also get a glimpse for the first time at a sky city, so it seems Link is headed back to the clouds at some point in the game.

The second clip premiered during the awards show, showing the Nintendo Treehouse team playing through an area of the game we haven’t seen before.

Though it’s only about four minutes of playtime, there’s a lot to unpack. Link meets a minstrel named Kass who sings a song to help him navigate to a shrine in the woods. Along the way, Link encounters some enemies and… doesn’t fare too well. To recover, Link has to eat some food—a new RPG-like feature for a Zelda game, which typically handles recovery with potions and fairies. Link is carrying a sword, bow, and spear, all of which take damage and break in battle. (Again, an unusual feature for the franchise.)

The Treehouse team doesn’t go into the shrine to pick up their treasure after vanquishing their foe, but the clip has given us plenty to chew on. Breath of the Wild will be playable on both the Wii U and Nintendo’s new Switch console, but the game remains frustratingly unattached to a release date aside from “sometime in 2017.” The Switch debuts in March.