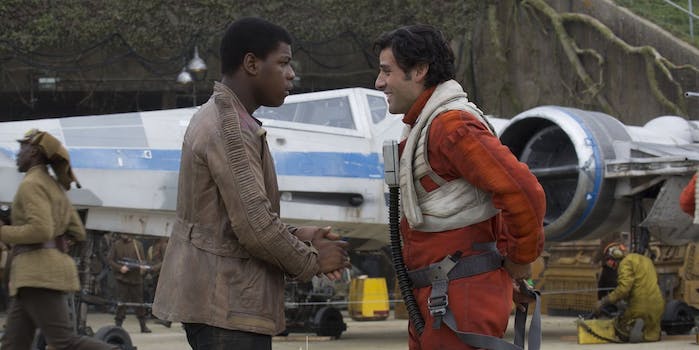 "It Suits You" is the Poe/Finn love song we've all been waiting for.

Poe and Finn were some of the unexpected breakout stars of The Force Awakens, and it took no time at all for fans to produce hundreds of fanfics around their romantic possibilities and an energetic debate about queer representation in Hollywood.

Now, the Internet’s favorite space boyfriends have their own theme song.

“It Suits You“—named after a line in the movie—was posted by nerd rock musician Kirby Krackle on Wednesday. Get ready to hear this on every Poe/Finn 8tracks fanmix from now unto forever.

Kirby Krackle’s albums include songs with titles like “Dancing Baby Groot” and “No Spoilers, Please,” so it was clearly only a matter of time before he wrote something about Star Wars.

“It Suits You” is a sweet guitar ballad with lyrics like “A hunger burns just like X-Wing fuel/And once it’s lit it melts away the rules,” which totally fits with the occasionally awkward sincerity of Poe and Finn’s romance. Now all Star Wars fandom needs is a goth rock anthem for Rey and Kylo Ren, the other unexpected but super-popular pairing to come out of The Force Awakens.