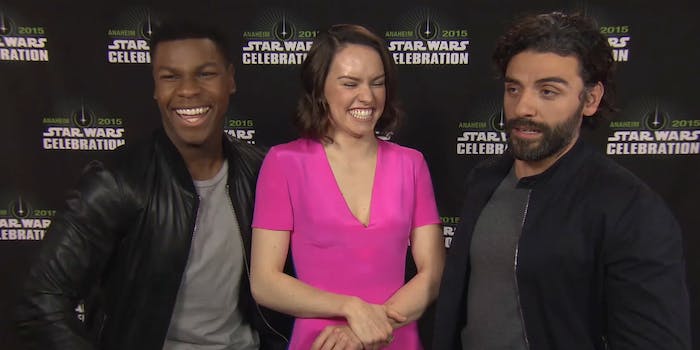 The ultimate romance of 'Star Wars: The Force Awakens' is clearly Rey/Finn/Poe.

The Force Awakens is packed with callbacks to the original Star Wars trilogy, from cameos to visual references to entire arcs of the film’s story. But hiding behind the more obvious details like Starkiller Base (an homage to the Death Star) and Kylo Ren’s Darth Vader cosplay persona, there’s one particularly significant overlap between the two generations of the Star Wars universe.

In The Force Awakens, as in the original trilogy, the main OTP is actually an OT3.

OTP, or One True Pairing, is one of the most popular slang terms in Internet fandom, a handy acronym to describe when you’re really invested in a particular romantic pairing. OTPs can be canon (Team Edward in Twilight) or not (Harry/Draco), but virtually every fandom inspires at least one. Star Wars is just one of those rare cases where the main OTP is an OT3 instead: Han, Luke, and Leia.

The friendship between Rey and Finn is all the more engaging thanks to their isolated childhoods on Jakku and in the First Order. It’s entirely possible that neither has had a true friend before, and the film draws a convincing relationship arc in which they accelerate at breakneck speed from reluctant allies to devoted partners. By the time Kylo Ren kidnaps Rey, Finn’s resulting anguish seems absolutely real, spurring him to lead a rescue mission when, only a couple of days before, he was determined to get as far away from the war as possible.

The Force Awakens wisely steered clear of any overt romance between the new characters, although there are some hints of it in earlier scenes between Finn and Rey, like Finn grabbing Rey’s hand and later asking if Rey has a boyfriend. But this could just as easily be a case of Finn reaching out for human contact after a lifetime encased in the chilly confines of a stormtrooper uniform. Honestly, there’s already a similar capacity for romance between Finn and Poe, although it’s illustrated in a more symbolic fashion.

In contrast with Finn and Rey’s youthful kindred-spirit bond, Finn and Poe share a kind of fierce joy as they escape the Star Destroyer, later reuniting at the Resistance base on D’Qar. Poe makes a tremendous impact on Finn after just a few brief moments together, giving Finn his name—and his jacket, which we’ll get to in a moment. When the time comes for them to say goodbye before the attack on Starkiller Base, the camera spins around them like something from a ballroom scene in a Regency romance, showing the two men pass through each other’s orbits before they leave for battle. As Oscar Isaac put it during a Star Wars press event, “their fates are forever intertwined.“

On top of the fully realized friendships between Finn and Rey on the one hand and Finn and Poe on the other, the thing that truly makes this an OT3 is the way the film links Rey and Poe together as well. Even though they barely share a single scene (only briefly appearing together at the end but never speaking), they’re linked together throughout the narrative. BB-8 passes from Poe to Rey, and Poe’s mission—to find the map to Luke Skywalker—ultimately becomes Rey’s quest as well. In another film, this storyline might feel too reliant on coincidence, but in the Star Wars universe it means something more spiritual: the will of the Force.

While classic Star Wars fans will be happy to see the return of Luke’s lightsaber and the Millennium Falcon, the most important prop in The Force Awakens is surely Poe Dameron’s jacket. Clothes-sharing has long been a symbol of intimacy, and here it’s plot-relevant as well. Poe’s jacket is what draws BB-8 to Finn on Jakku and sets in motion their intergalactic adventure. It may also be Finn’s first true possession, a gift that feels all the more meaningful when he later lends it to Rey. Understandably, it took about 0.5 seconds for that jacket to become a staple of The Force Awakens fanart and fic. Long may the OT3 reign.