Indie game Koi is lovely, but there’s little below the surface

Prepare to be bored.

Koi may be a beautiful game, but its gameplay is about as deep as a puddle. 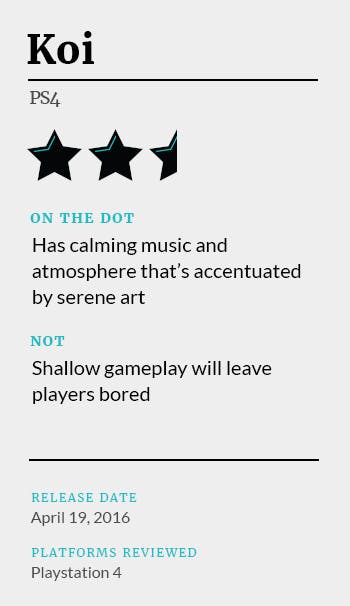 The indie game from Chinese developer Dotoyou is the company’s first foray into the Western console market. While Koi intends to deliver an earnest experience about the beauty of nature, its execution leaves a lot to be desired.

It’s hard not to see instant parallels between Koi and the 2009 hit Flower from developer thatgamecompany. Both are all about making blossoms bloom—the difference in Koi being that you guide brightly colored koi fish to flowers of the same color. While on the search for your different-hued fish buddies, there are evil fish lurking the waters. Players must circumnavigate these gloomy, red-eyed silhouettes to lead their fish to safety. This may sound like a glorified escort mission, and that’s because it is. At the very least the actual escorting is pain free, because getting hit by an enemy has no consequence. You’ll only slow down for a few seconds before you’re back on your way.

While the game is bug-free and there aren’t any notable glitches, you can see the code behind the curtain. More thought could have been put into systems of escorting fish. There was one instance in which a koi fish was behind a barrier, and it was clear the game wanted you to find a way around the blockade. While approaching the impediment, however, I noticed the koi had activated. I had gotten close enough that the game registered the koi was now following me, even though it was supposedly stuck. I tried going straight to the flower and, lo and behold, the koi came in from the side of the screen. While it’s not a game breaker, it is a notable oversight.

Small puzzles are interspersed through the game to offset the monotony, though they really count as puzzles as much as skateboards qualify as legitimate transportation. Puzzles consist of Simon-says, matching pictures, and reorienting pieces of a picture on a grid. They’re bewilderingly easy, making you question their inclusion in the first place. Puzzles are also completely disjointed from the rest of the experience, randomly appearing and requiring completion before you can move forward.

While the gameplay in Koi can be inconsistent, its art and visual charm are not. Koi has a top-down perspective with a minimalistic, cardboard-cutout aesthetic. The colors and patterns are clean and without texture. The simple visuals come from Koi’s origins as a mobile game, but the simplicity remains part of their appeal.

The top-down perspective also has its drawbacks. Because ponds can be very large at times, players may find themselves lost, not sure which way to go. Luckily a button press can point an arrow in the right direction. While handy, I found myself quickly pressing the button at any sign of disorientation. That points to its flawed design. Where other games use visual cues to guide players into moving in the right direction, Koi has to straight up tell you. It pulls you out of the experience and doesn’t encourage exploration.

Players might not find much joy in exploring anyway. Ponds can be very barren, with an occasional puzzle piece or star to collect. There’s very little incentive to hunt these pieces down, as they only unlock art. 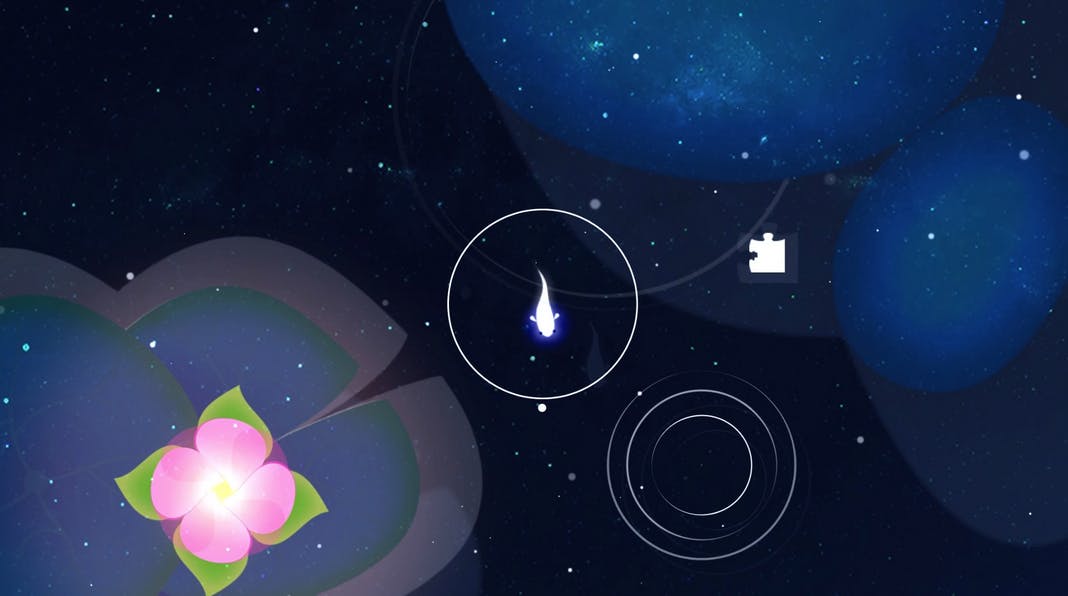 One saving grace for Koi is its excellent score. All the swimming and flower blooming is underscored with whimsical keys that bring a fairytale-like wonder to the experience. The composer, who simply goes by Zeta, also knows when to tone it down during its more tragic moments. Notes of melancholy are staggered as man’s pollution ever encroaches and poisons.

While themes of nature, beauty, and destruction permeate the game, Koi fails to deliver a proper resolution. Flower had a clear message about nature and man’s negative influence; it ended with the idea of coexistence and hope. Koi hits on the destruction of nature, but its conclusion is unrelated. Actually, the ending seems to take a page from Journey, another title from thatgamecompany. Without spoiling anything, Journey’s themes of life and rebirth pop-up at the end of Koi, and it feels dissonant.

I feel very mixed about Koi. While my preview from earlier this year was glowing, actually sitting down to play the game highlighted its many faults. I see where the developers were coming from. They wanted to make a game that was emotionally engaging, with a message about nature and the broader story of life. They had lofty goals that unfortunately fell flat. While pretty, the gameplay was repetitive and did not give you much reason to care or want to progress. Games like Flower gave you a sense of levity and freedom, but Koi felt like an on-rails experience with no room for diversion. In such a cloistered environment, it’s hard to relate to its underlying themes. Koi isn’t a game for everyone, but for those wanting a short and simple experience, possibly for kids, it could be a fun two-hour diversion.

Disclosure: Our PlayStation 4 review copy of Koi was provided courtesy of Oasis Games.