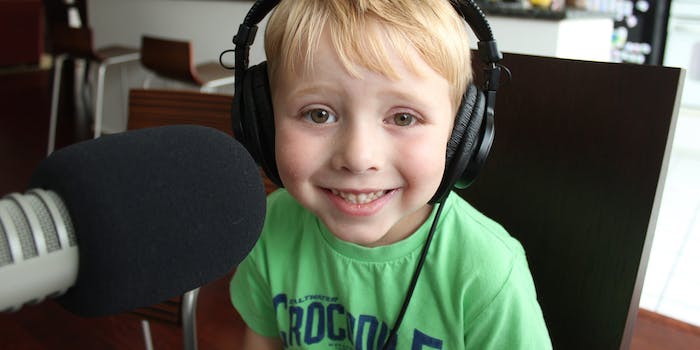 Photo via The Show About Science

Ambitious 5-year-old divides his time between podcasting and kindergarten

He wants others to 'get a love for science.'

If The Show about Science is not already on your podcast subscription list, it absolutely should be. Big-name guests like Anna Rothschild and Joe Hanson of PBS Digital Studios are outshined by the host, Nate Butkus, who at the tender age of 5 is already doing more with his life than most people do by age 25.

Nate’s dad, Eric Butkus, produces podcasts and videos for the Journal of the American Medical Association (JAMA). Butkus said after Nate came with him to the Chicago-based studio one day, he decided he wanted to make his own podcast.

“I said, ‘Sure. What do you want to call the podcast?’ He instantly replied, ‘The Show About Science!’” Butkus wrote in an email to the Daily Dot. “I said, ‘OK. And who would you like to interview?’ He said, ‘Mom.’”

Since his first three-minute interview back in August with his mother, Jenny, Nate has gone on to interview many scientists, one astronaut, and personalities from YouTube like the Amoeba Sisters.

Nate does the lion’s share of the work, Butkus said. The Daily Dot asked Nate about his process.

“Well, first I think of a topic. Second, we reach out to the person. Third: interview them. Those are the three steps,” Nate said over the phone. He added that his favorite step is the interview.

Nate asks important and interesting questions, like “Do baby alligators get headaches?” and “What is radiation?” He prepares for each interview by conducting his research through educational videos on YouTube. He particularly likes the TED Ed series and It’s Okay To Be Smart.

After each interview, Butkus edits the podcast and puts it on the air.

Nate said that if he could interview anyone, it would be “Albert Einstein, Charles Darwin, and Isaac Newton.” But as far as living interviewees go, he has his sites on Bill Nye and Hillary Clinton.

Nate said he initially reached out to Clinton about a year ago.

“I would talk to her about basically how she would run the world if she was the president of the United States,” Nate said. “I still haven’t gotten a response. It’s the weirdest thing! I’ve been waiting a year.”

Nate said his interests are not solely centered around science. He’s also interested in “inventing, science-ing, and politics-ing.”

He’s already working on an invention to give better back massages, which he calls the Massage-a-tron 5000. He’s also working on a video game about aliens called Alien Catcher.

When asked what he wanted to be when he grew up, Nate said, “It’s a mix. I don’t know yet.”

He’s considering many career paths, including “politics-ing and science-ing.” He also said he’d consider being a teacher, or maybe podcasting full time.

But for now, his mission is to get more listeners.

“Basically I need the most people that I can get to listen to my show,” Nate said. “I want them to get a love for science.”