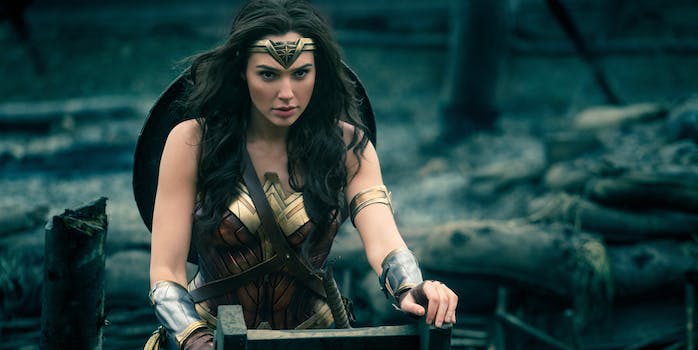 Why Wonder Woman is the perfect superhero for World War I

As an old-fashioned hero, Wonder Woman confronts the 'modern' cruelty of the First World War.

Created in 1941, Wonder Woman began as a World War II hero like Captain America. She battled the Nazis alongside U.S. Air Force officer Steve Trevor, but the new movie rewrote their story for the First World War. This change was an inspired choice, not least because Hollywood makes already too many WWII movies.

At first glance, Diana’s characterization is a little self-contradictory. She wants to bring peace to mankind, yet she’s a warrior who loves to fight. The film handles this dichotomy by showing the difference between the Amazons’ attitude to combat, and the brutality of trench warfare in the human world.

Raised to admire Greek mythic heroes like her aunt Antiope, Diana soon gets a crash course in the harsh reality of WWI. Wartime Europe is gloomy and grim, full of needless suffering and terrifyingly destructive new weapons. Diana’s journey mirrors an abrupt transition that Europe just experienced itself, because WWI was a turning point in the history of warfare. Even among the eventual victors, the First World War was characterized by trauma and despair, not valor or patriotism.

WWI began for old-fashioned reasons, kicking off with the assassination of a prince. The leading powers were empires ruled by hereditary monarchs, and their officers rode into battle on horseback, brandishing swords. They were met by explosive shells, machine guns, and chemical weapons on a massive scale.

The old idea of heroic warfare was completely at odds with the size of the armies being slaughtered, and the unprecedented power of their weapons. Wonder Woman explores this transition from Diana’s perspective, in little moments like her shock at using a sniper rifle instead of fighting face-to-face. Despite being raised in a warrior culture, this is her first experience of true violence.

Tellingly, Wonder Woman‘s sniper character suffers from PTSD—still known as “shell shock” at the time. At one point he hints at the upside of using a long-range rifle: You don’t necessarily know who you’re shooting. It’s a perfect weapon for WWI, where many soldiers were conscripts with no desire to fight. One of the most famous wartime songs on the British side was “We’re here because we’re here,” a gallows-humor joke about the futility of life in the trenches.

WWI was a smart choice for Wonder Woman’s role as an old-school hero, but it caused some problems as well. Basically, it’s hard to make a wartime action movie where the “bad guys” aren’t actually bad.

Hollywood loves the second World War because it comes with ready-made supervillains. Movies like Inglourious Basterds would seem ghoulish during another war, but they work for WWII because we can all agree the Nazis were evil. This presents a problem for Wonder Woman, because while the film acknowledges the universal horror of the Great War, it borrows imagery from WWII movies. Two of the three villains belong to the German army: the ruthless General Ludendorff, and the mad scientist Dr. Poison, who cackles sadistically over her deadly inventions. They’re straightforwardly evil, while the British leaders are merely buffoonish and sexist.

Wonder Woman‘s main villain is the Greek god of war, Ares. But despite his looming presence in the background, we see more of Ludendorff, Dr. Poison, and anonymous German troops on the battlefield. There’s a weird imbalance between all the exciting fight scenes against the Germans, and the revelation that some of those soldiers are fresh-faced (probably conscripted) teenage boys. The ultimate payoff is peace for both sides, but it’s achieved by the good guys defeating the German Empire.

This moral gray area works better with Wonder Woman than it would with Batman or Superman, who are generally depicted as less warlike than Diana. Still, it’s a flawed use of WWI as an action movie setting. Ludendorff and Dr. Poison are certainly some of the weaker aspects of the film, almost indistinguishable from the Nazi villains in WWII blockbusters.

How Ares fits into WWI

Diana initially believes that Ares caused the war, and that once he’s dead, the war will end. Her journey involves learning the truth about mankind’s propensity for violence, helped by her sympathetic but cynical love interest Steve Trevor. There’s even a hint that Ares is less god-like than he seems. Instead of pushing entire armies into war, he just nudges individual humans toward harmful choices.

To a certain extent, Ares and Steve Trevor have similar opinions about mankind’s attitude to war. They both think war is an unavoidable part of human nature, although in the late 19th and early 20th centuries, some leaders went even further. In 1880, German general Helmut von Moltke described war as “part of God’s world-order.”

“Within it unfold the noblest virtues of men, courage and renunciation, loyalty to duty and readiness for sacrifice – at the hazard of one’s life. Without war the world would sink into a swamp of materialism.”

This was a generation before WWI, but it’s one of the mindsets that shaped the German military leaders of WWI. In fact, Moltke’s own nephew was in charge of the German army when war broke out in 1914. This was a world where people publicly characterized war as a positive force of glory and virtue. To modern ears, that sounds like a speech from Ares himself.

Despite the prologue and epilogue scenes in the present day, Wonder Woman almost feels like a story written during WWI. It refers to the setting as “the war to end all wars,” portraying the defeat of Ares as a triumph over war itself. But from our perspective, it’s obviously a hollow victory. Over the next 20 years, Germany would reach a breaking point that led to the rise of Hitler. We know that humanity is capable of destroying itself without any help from Ares.

Even though Wonder Woman ended on a bittersweet note, it illustrates why Diana is so necessary at this particular point in history. She arrives just as the old ways of fighting—horses, pitched battles, face-to-face combat—are being replaced by mechanized weaponry. As a mythic warrior with a clear moral code, she cuts through the cynicism of modern warfare to bring hope in a time of worldwide trauma.