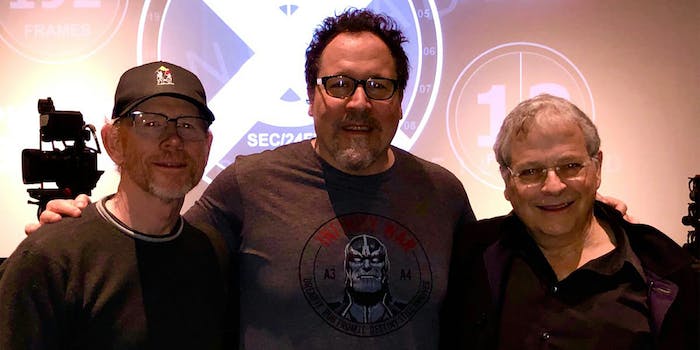 He'll work with a 'diverse group of writers' on the show.

The series will air exclusively on Disney’s upcoming streaming service that will tentatively launch in late 2019. Not much else is known about the project apart from Favreau’s involvement. Disney first announced plans to create a live-action Star Wars TV series in November during a quarterly earnings call, just one of several that appear to be in the works.

“I couldn’t be more excited about Jon coming on board to produce and write for the new direct-to-consumer platform,” Lucasfilm president Kathleen Kennedy said in a statement. “Jon brings the perfect mix of producing and writing talent, combined with a fluency in the Star Wars universe. This series will allow Jon the chance to work with a diverse group of writers and directors and give Lucasfilm the opportunity to build a robust talent base.”

Like The Last Jedi director Rian Johnson, who is creating a new Star Wars film trilogy for Lucasfilm, Favreau had previous ties to Star Wars before his involvement was announced. He voiced the Mandalorian warrior Pre Vizsla in Star Wars: The Clone Wars and he’ll appear in Solo: A Star Wars Story as a four-armed alien who director Ron Howard has described as “a very cool & important alien character.”

Favreau has also been part of the Disney family for more than a decade. He directed the first two Iron Man movies and has been an executive producer on several Marvel Cinematic Universe movies, directed the live-action remake of The Jungle Book, and will direct The Lion King, which will be released in 2019.

“If you told me at 11 years old that I would be getting to tell stories in the Star Wars universe, I wouldn’t have believed you,” Favreau said. “I can’t wait to embark upon this exciting adventure.”

As was the case with previous announcements with new projects, Favreau’s involvement will be met with criticism (even from those who are interested in seeing what Favreau will do). This is just the latest instance where Lucasfilm has hired a white man to head a major Star Wars project as some fans repeatedly have called for Lucasfilm to be more inclusive behind the camera; the announcement arriving on International Women’s Day is adding insult to injury. According to a recent tally by Variety, 96 percent of the creatives behind Star Wars films were white men with only one white woman credited. In her statement, Kennedy indicated that Favreau’s show will be diverse, noting that he will work alongside a “diverse group of writers,” so Favreau’s writing staff might be more inclusive than previous films have been.

There is no release date attached to Favreau’s Star Wars series.