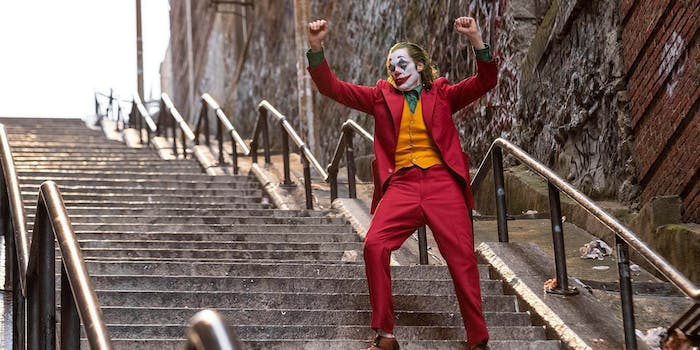 'Please make sure you’re carrying cash. And don’t be worried about the locals around the area they’re nice individuals.'

Instagrammers are flooding the Bronx in New York City to visit the Joker stairs, as seen in the movie, and locals seem far from excited about it.

Photos taken by Joker fans on the stairs, connecting Shakespeare and Anderson avenues at West 167th Street, run the gamut from normal to next level. In the movie, Joaquin Phoenix’s Joker dances down the stairs.

joaquin as joker dancing and smoking on those stairs is one of the best things to ever happen in movies. pic.twitter.com/mkP0RDJTYJ

“Went to them Joker Stairs,” Twitter user @MEtriAndReyes wrote, along with his photos imitating the super villain’s poses.

*Me coming down the stairs after seeing Joker*: pic.twitter.com/fF1CG3gIEe

Cosplayers, like Veronica Rae, have gone all out to recreate the scene.

“Legally as a Bronx resident you’re allowed and encouraged to tax anyone visiting the Joker stairs,” Desus Nice, from Showtime’s Desus & Mero, tweeted.

Others are joking that Instagrammers are at risk of being robbed.

“Please make sure you’re carrying cash. Everything around that area is cash only so make sure you have a lot of cash. And don’t be worried about the locals around the area they’re nice individuals,” Twitter user @BornHooligan_ wrote.

Please make sure you’re carrying cash. Everything around that area is cash only so make sure you have a lot of cash. And don’t be worried about the locals around the area they’re nice individuals https://t.co/hDmAs6iq2u

Some also took notice that the stairs now seem to be called “Joker Stairs” on Google Maps.

“Those awful stairs on 167 are now renamed ‘the Joker stairs; so I just want to remind everyone that the bronx is not a friendly place for tourist attractions you will get robbed beloved,” Twitter user @kailaniskye wrote in a PSA to anyone thinking about visiting.

It’s really called the Joker Stairs on google now (I just searched it).

Please, if you’re reading this and you’re not from around here (or ever been to the Bronx, Yankee stadium does not count) PLEASE DO NOT COME HERE.