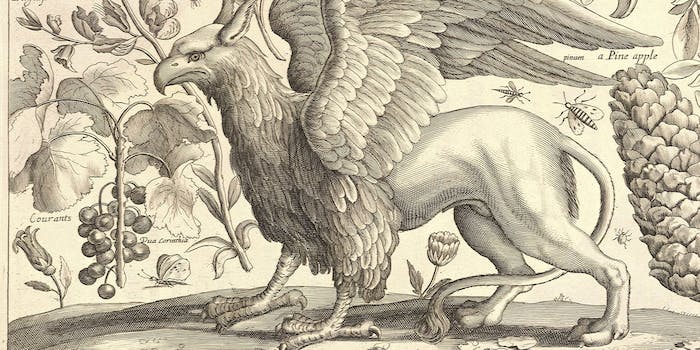 Fa awry! But what does it mean?

J.K. Rowling has returned to her playful habit of teasing her fans with riddles, puzzles, and fun hints about what’s to come in the future of the Harry Potter universe.

The queen of the Wizarding World has long been a fan of using the Internet to engage her fans in unlocking clues to her projects, but this time she’s outdone herself: She’s posted a riddle on Twitter that no one understands.

The riddle is presumably about the upcoming Fantastic Beasts trilogy, and all our thanks go to Twitter user @peruseprojects for coaxing Rowling into dropping the hint.

Yesterday Rowling, who’s been inhabiting Twitter more and more frequently lately, to the joy of all, gave us an update on her workaholic lifestyle:

Very busy at the moment working on a novel, tweaking a screenplay and being involved in @lumos campaigns. Back when I’ve finished something!

When peruseprojects responded, Rowling thrilled the planet by replying to her.

.@peruseproject See, now I’m tempted to post a riddle or an anagram. Must resist temptation… must work…

Then she went a step further and made good on her tease:

Something to ponder while I’m away X

Rejoice! Break out your decoders! “Fa awry?” What on earth does it mean?

The general consensus from fans is that the tweet is most likely a line from the screenplay for the first Fantastic Beasts film, which JKR is writing herself. Her earlier note that she was “tweaking” it means it’s already finished, which is great news for us. But if we know our Jo, she likes to drop in plenty of coded language and wordplay in her hints.

We couldn’t help notice that this part of her tweet:

is an anagram for:

OK, so it’s a stretch, but we already know that Fantastic Beasts is set in 1920s Manhattan. It makes sense that our hero Newt Scamander’s quest to track down the aforementioned Fantastic Beasts will take him all over the world.

So is J.K. Rowling telling us that part of the plot will take place in the Yauca District of Peru?

Probably not—we suck at word puzzles. But we’re delighted that JKR’s given us a tantalizing new peek inside her new store of mysteries—and especially happy she’s up to her old tricks again.

Update: Since her initial puzzle, Rowling has updated with more hints for the enterprising sleuths among us:

#helpfulhint The solution is the first sentence of a synopsis of Newt’s story. It isn’t part of the script, but sets the scene.

Redditors have also pointed out that the full anagram not only contains the words “New York” as mentioned above but the words “Newt Scamander,” the name of our hero. We look forward to hearing where eager fans take the clues from there—and what hints JKR will drop next.