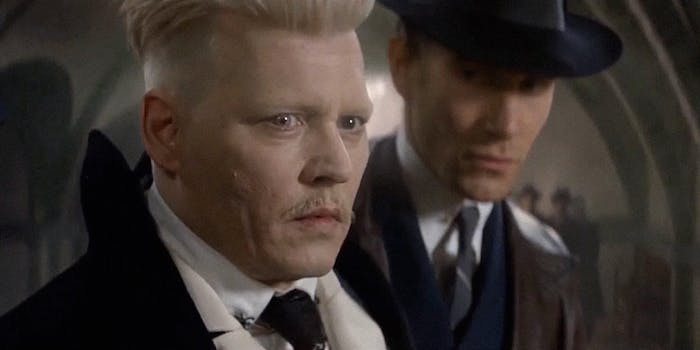 'Within the fictional world and outside it, we all have to do what we believe to be the right thing.'

J.K. Rowling released a statement explaining the decision to keep Johnny Depp on Fantastic Beasts: The Crimes of Grindelwald weeks after the debate about whether to recast him resurfaced.

Many fans have been uneasy and critical about Depp’s casting since last year. When it was first announced—shortly before the theatrical release of Fantastic Beasts and Where to Find Them—Warner Bros. received swift backlash for hiring an alleged domestic abuser. Depp’s ex-wife Amber Heard said that he physically harmed her, providing photographs of bruises and screenshots of messages during their divorce proceedings. Depp has denied the allegations, though his former managers also said Depp had “gotten physical” with Heard. The first Fantastic Beasts film featured Depp in a small cameo role, so some fans hoped that Warner Bros. would recast him—especially since it would be easy to do.

Last month, however, Pottermore unveiled the title and first cast photo for The Crimes of Grindelwald, which put the focus on Depp in the role of dark wizard Gellert Grindelwald. The reveal drew even more fan scrutiny, particularly after the massive backlash against abuse and predation by powerful men in Hollywood that started with Harvey Weinstein. An attempt by David Yates to defend keeping Depp in the movie—which included the insinuation that he didn’t believe Heard because Depp is “full of decency and kindnesss” and she was his only alleged victim—drew even more outrage as fans interpreted it as a classic example of victim blaming.

Now Rowling, who wrote screenplays for Fantastic Beasts and The Crimes of Grindelwald, is speaking for the first time since the new wave of backlash emerged. She posted a statement to her website Thursday, noting on Twitter that “I’m saying what I can about the Grindelwald casting issue here.”

I'm saying what I can about the Grindelwald casting issue here:https://t.co/NDMjy542Yv

Rowling’s site immediately crashed as fans rushed to read what she had to say. The statement is awkwardly worded and appears to defend Depp without saying it outright, instead referring to it as “our understanding of circumstances.” Rowling admitted that she and Yates considered recasting Depp before deciding to stick with him.

“The huge, mutually supportive community that has grown up around Harry Potter is one of the greatest joys of my life,” she wrote. “For me personally, the inability to speak openly to fans about this issue has been difficult, frustrating and at times painful. However, the agreements that have been put in place to protect the privacy of two people, both of whom have expressed a desire to get on with their lives, must be respected. Based on our understanding of the circumstances, the filmmakers and I are not only comfortable sticking with our original casting, but genuinely happy to have Johnny playing a major character in the movies.”

“Based on the circumstances and the information available to us, we, along with the filmmakers, continue to support the decision to proceed with Johnny Depp in the role of Grindelwald in this and future films,” Warner Bros. said, according to Deadline.

Fans and critics have already begun to make their feelings known to Rowling. Some had already vowed to boycott The Crimes of Grindelwald before Rowling made her statement, while others have expressed disappointment and shock—more so at Rowling than the decision itself.

Jo has never once indicated (to me) a problem with speaking my truth to her power. She’s been an absolute champion in that regard. So I hope that continues when I say that my truth right now is that this statement has made me very sad. https://t.co/8mNxleEuds

This is an intensely disappointing word salad from JK Rowling re Johnny Depp. It manages to say nothing & yet give Depp a pass in the most evasive, passive way possible. Ugh. https://t.co/bZ5Sy9NfqH

Johnny Depp is such a sad, random hill for Yates and Rowling to fight and die on.

It's very telling that on the day TIME magazine named "the silence breakers" as 2017 person of the year, JK Rowling chose to speak out in support of a known abuser.

So basically Johnny Depp told you he didn't do it and you believed him. This is shit, JK Rowling. pic.twitter.com/r9HIFQXNVK

Despite the show of public support from Rowling and Warner Bros., the controversy about keeping Depp, who will likely have a major role in the four Fantastic Beasts movies left to film, won’t go away. Many longtime Harry Potter fans see Yates’ statement and Rowling’s continued Depp support as a giant slap in the face—and they’re unlikely to change their minds. Concerns will resurface online over every photo, trailer, featurette, and press interview about the film.

Rowling acknowledged that the decision to keep Depp on would still leave some fans unhappy.

“However, conscience isn’t governable by committee,” Rowling said. “Within the fictional world and outside it, we all have to do what we believe to be the right thing.”

If nothing else, the backlash shows that fans are deeply divided on what “the right thing” is in this case.