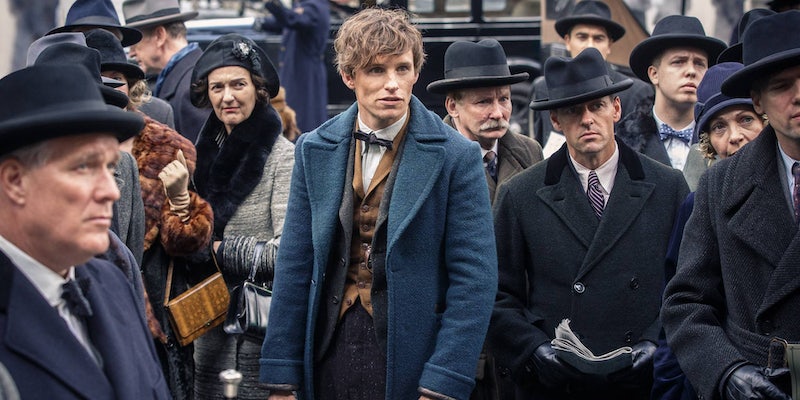 Instead of relying fannish nostalgia, Fantastic Beasts feels like refreshingly new territory for J.K. Rowling‘s wizarding world, avoiding Harry Potter callbacks aside from a few musical cues and worldbuilding details. The storytelling and characterization may not be as deep as Rowling’s novels, but it still brings that immersive sense of wonder, coupled with a dark undercurrent of moral conflict.

Set in 1926, Fantastic Beasts opens a five-film series that will culminate in 1945, the year when the dark wizard Grindelwald (Johnny Depp) was defeated by Dumbledore, and the young Tom Riddle left Hogwarts to become Lord Voldemort. We’re introduced to Wizarding New York through the eyes of Newt Scamander (Eddie Redmayne), a young English magizoologist with minimal character development and backstory, but plenty of charm. His collection of magical creatures forms the basis for the textbook Fantastic Beasts and Where to Find Them, which inspired the new franchise.

Much like the Potter books, Fantastic Beasts weaves together two storylines: an immediate problem faced by our hero (Newt Scamander losing his suitcase full of magical creatures, precipitating chaos in non-magical New York), and an over-arching political narrative that will continue in later movies. Instead of the eugenicist pureblood conflict of Wizarding Britain, American witches are more concerned about keeping magic secret from no-majs (the U.S. term for muggles). This sets up an interesting concept for later movies, along with some troubling plotholes.

Throughout the Potter franchise, magical secrecy is portrayed as an uphill battle. Britain’s Ministry of Magic constantly has to wipe muggles’ memories of accidental contact with magic. Its American counterpart, the MACUSA, seems more authoritarian. American witches and wizards are forbidden from befriending or marrying no-majs, a harsher mode of segregation than in Britain. Meanwhile, Grindelwald wants to expose the magical world and trigger an all-out war.

The problem is, if Newt Scamander can cause mayhem by losing a few magical creatures… shouldn’t Grindelwald find it easy to expose wizardkind on purpose, just by doing flashy and dangerous magic in public? Also, the MACUSA has a very inconsistent attitude to memory-wiping. When the no-maj Jacob Kowalski (Dan Fogler) accidentally picks up Newt’s case of magical creatures, magical law-enforcement wants to wipe his memory as soon as possible, even after he and Newt become friends. But for some reason, they don’t wipe the memories of our main antagonists, a no-maj cult that wants to provoke a “new Salem” by distributing leaflets about witchcraft. Since the New Salemers consist of one fanatical woman (Samantha Morton, channeling the mom from Carrie) and a gaggle of orphans, this wouldn’t be a difficult task. These inconsistencies continue with some of the main characters, whose characterization is less complex than Rowling’s other work. Newt’s greatest moments are with his magical creatures, when we’re invited to share his deep love and empathy for misunderstood monsters and endangered animals. Coupling gorgeous production design with some smart ideas about animal behavior, the beasts are unique, funny, and provide some of the most memorable scenes in the movie. Newt himself is a classic nerd with a heart of gold, with Redmayne projecting a veneer of well-meaning naiveté over a man who we later discover has already survived one World War.

Unfortunately, Redmayne’s co-stars don’t get as much to work from. Jacob Kowalski is a typical bumbling everyman role, plagued by fat jokes. Our other two leads are the sisters Tina (Katherine Waterson) and Queenie (Alison Sudol) Goldstein, whose relationship receives virtually no exploration at all.

Tina is the more serious of the two, a government official who arrests Newt for losing his magical creatures, hoping that he’s her ticket to a better reputation at work. But her motivation is rather uneven, switching between being law-abiding and career-minded, and protecting Newt from arrest by her own bosses. Although Katherine Waterson gives an engaging and individual performance, Tina’s characterization is weak compared to any major role in Harry Potter. As for Queenie, she’s almost a cartoon. In contrast with Tina’s dowdy outfits and hair, Queenie is a vivacious blonde, introduced in a scene where she poses for the camera (or Newt and Jacob) like Jessica Rabbit. Even in a world populated by Dickensian caricatures, this feels pretty bizarre. By the end of the film, you’re hard pressed to pin down any of her character traits beyond “ditzy,” “nice,” and her ability to read minds.

The villains are a great deal better. Rowling has a knack for child abuse stories, and Ezra Miller gives a painfully vulnerable performance as the unfortunate, repressed Credence Barebone. Raised by anti-witch fanatic Mary Lou Barebone, his life has been shaped by constant abuse. Auror Percival Graves (Colin Farrell) skillfully targets him as an easy mark, using physical affection and promises of a new life to manipulate him into becoming a double agent. It’s a viscerally creepy dynamic, showcasing Farrell as the film’s standout performance—and an intriguingly dark alternative to the heroic portrayal of Aurors in the Harry Potter novels. It will be interesting to see how Rowling’s political vision unfolds over the next four movies. Magical secrecy feels like a necessary evil for the survival of wizardkind, but the MACUSA is clearly going about things the wrong way. Aurors (magical cops) like Percival Graves apparently have the freedom to execute people without trial, and total no-maj segregation is needlessly cruel. Plus, some of our lovable, Hufflepuff-ish main characters are complicit. Even after befriending Jacob and witnessing his joy at seeing magic for the first time, Tina and Queenie agree he must have his memory wiped.

Fantastic Beasts takes place in a period between two wars, in both the magical and no-maj worlds. The rise of Grindelwald will probably follow the rise of fascism, in a continuation of Harry Potter‘s fight against bigotry and discrimination. Yet at the same time, this movie is all about white people. And it takes place in 1920s New York, the home of the Harlem Renaissance! Carmen Ejogo (playing the MACUSA president, a secondary role) is only actor of color in the main cast, even as the film includes roles for CGI goblins, giants, and house elves. In the current political climate, these casting choices feel like a thoughtless promotion of white supremacy.

As Rowling’s screenwriting debut, Fantastic Beasts was always going to have different strengths than the Harry Potter books. Fans of her intricate plotting may be disappointed, but the wizarding world still wields the same emotional draw. Even without the detail of prose fiction, the magical creatures and setting are an immersive thrill. It’s just too bad this feels more like the set-up for later films than a strong, standalone movie, with lead characters who feel thinner than some of the smallest cameo roles in Rowling’s novels.