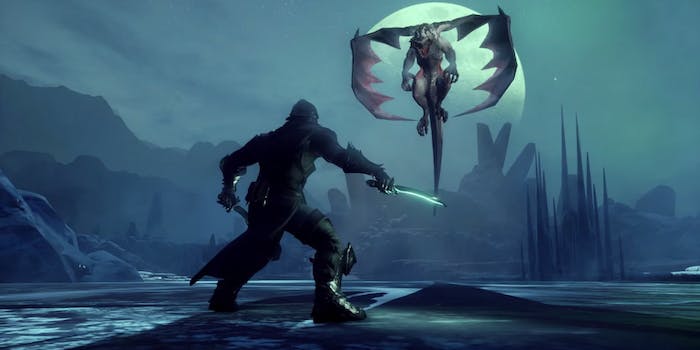 Don’t worry if you didn’t know this was coming. Neither did anyone else.

Expansion packs, especially for a franchise as popular as Dragon Age, are usually preceded with fanfare. Not this one. The first word anyone had about the award-winning game’s Jaws of Hakkon DLC was Monday afternoon on the BioWare Twitter account.

BioWare didn’t even release a launch trailer for the DLC. The link in the announcement tweet just leads to the Dragon Age YouTube page.

Kotaku confirmed the Tuesday release of this out-of-nowhere DLC on Monday afternoon, and sure enough we found Jaws of Hakkon on the Xbox One store this morning.

The new DLC is about a lost Inquisitor who was last seen hunting a dragon. Players will apparently be dealing with the Avvar while investigating the mystery. The Avvar, a barbarian tribe who worship sky gods, had a bit role in Inquisition’s main story when the adventure passed through a southern, swampy region of Thedas called the Fallow Mire.

Jaws of Hakkon costs $14.99. That’s an appreciable price tag for a downloadable expansion, but you can’t read anything in terms of the depth of the content just from its cost. Mass Effect 3, another BioWare role-playing game, offered DLC packs that could run as short as four hours long.

Then again, everything in Dragon Age: Inquisition is freaking huge, so we hope that bodes well for Jaws of Hakkon. We’ll be taking a look at the new DLC and reporting back as soon as we have the measure of this new adventure.

Jaws of Hakkon is only available for the Xbox One and PC, at the moment. There’s not yet a release date for Playstation.