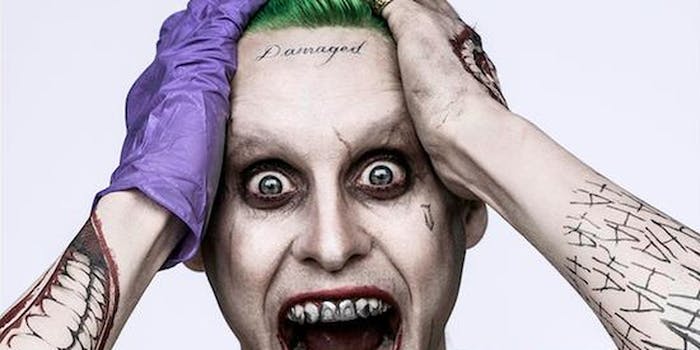 The Joker is one of the most iconic villains in all of fiction, and especially in film. When actor/musician Jared Leto was cast as the green-haired madman for the upcoming blockbuster Suicide Squad, nobody really knew what to think, but now we finally have our first look at what to expect from the next evolution of the famous antihero.

The reveal comes courtesy of Suicide Squad director David Ayer, who tweeted the photo in celebration of the Joker’s 75th anniversary. No other details or teases accompanied the photo, so we’re left to surmise whatever we can from the decidedly creepy portrait.

We should all age so well… Happy Birthday to The Joker. #Joker75 pic.twitter.com/uy9aKIOmTd

With a wealth of tattoos, gold rings, and teeth that appear to be covered in metal, Leto’s Joker is a far cry from both Jack Nicholson’s iconic, manicured portrayal, and Heath Ledger’s famously unhinged version. Such a departure from the past has gotten a wide range of reactions from the Internet at large, with some fans loving the new look, others disgusted, and a healthy segment deciding to hold off judgement until we’re allowed to see more.

If you happen to be in the dissenting group, it’s probably a good idea to remember the vitriol that spewed forth when the first images of Heath Ledger’s Joker were revealed, and we all know exactly how that turned out.