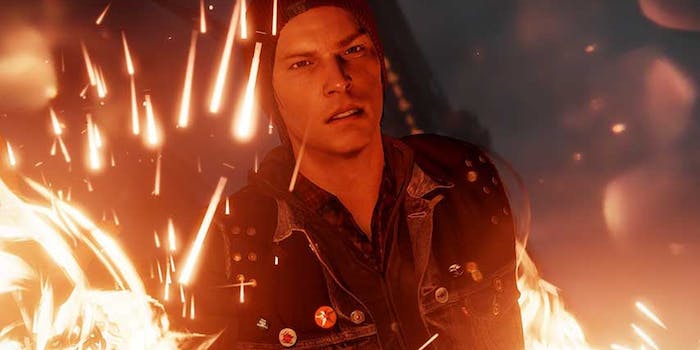 How ‘inFAMOUS Second Son’ is keeping gamers playing after the end

You can't sell to GameStop if there is still more to do.

inFAMOUS Second Son, currently the premiere game on Sony’s fancy new PlayStation 4, has fans scratching their head. Within the game, a side mission called “Paper Trail” has players debunking a series of violent murders. The game requires players to find evidence at crime scenes within the game and then go to their computer to examine clues and come closer to finding the culprit.

It’s an interesting melding of console and computer interaction. It’s also an action gamers aren’t unaccustomed to. Upon finding evidence, the game syncs with online servers and asks players to refer to their computers to start solving the mystery. Gamers comb through wallets containing business cards, comic strips, and whatever else they can find to gain more insight.

A business card may contain a website address as well as other clues that could provide a login. From there gamers may be able to comb through letters, emails, and whatever else until they’re prompted to go back to the game to search for more clues.

It definitely breaks the experience of the open world superhero simulator and expands the possibility of the ludonarrative. To my knowledge very few game’s have done this in the past.

The main advantage of having a mission like this is that it keeps players talking about the game far after the game’s initial release. The “Paper Trail” mission was released in weekly installments after its launch. Every week, users on Reddit and NeoGAF would talk and discuss various aspects and make predictions. It was a fun way to increase longevity, an important part of a publishers model.

Many single-player games fall into the trap of ending and not offering much content after you finish the primary narrative. This prompts many players to trade in their copies to GameStop. Trade-ins sold back to consumers means less profit for publishers.

As of now, Sucker Punch hasn’t announced any other post game missions similar to “Paper Trail.” With the buzz and success of the side mission though, it might not be a bad idea to continue investing in inFAMOUS Second Son.

The second-screen experience has been touted by the industry for a while, and games such as Mass Effect 3 and Dead Rising 3 shared features that allowed players to play the game without being at their console. It’s in expanding these experiences that publishers feel players will feel more attached to their game’s and feel less compelled to trade it in to GameStop.

Photo by BagoGames/Flickr (CC BY 2.0)