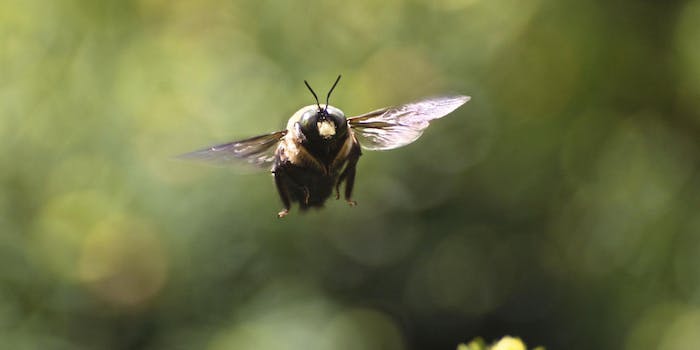 I believe they can fly.

Humans dreamed about flying for hundreds (thousands!) of years before we came up with a way to launch ourselves into the sky. But animals figured it out through the process of evolution in varied and stunning ways. While human flight requires some extra hardware we can always appreciate the flapping, gliding, and buzzing solutions in nature.

Designer Eleanor Lutz created this stunning animated infographic that shows the wingbeats of five different species: a fruit bat, a hawk moth, a Canada goose, a hummingbird, and a dragonfly.

The dragonfly’s asynchronous double wings are especially cool. The work was partly inspired by Lutz’s experience during undergrad working in an insect lab. “I helped out with an experiment about mosquito larvae,” she writes. “As part of the process we used a Matlab program to manually input the larva’s location during thousands of video frames.”

By breaking down frame-by-frame some slow-motion videos of animals flying, Lutz found a way to recreate the patterns formed by wingbeats. For example, compare this video of a hummingbird feeding to Lutz’s creation. Or these slow-motion bats:

Lutz’s project is art, but researchers really do use slow motion to figure out how biology has conquered flying. Why? To help us understand evolution and maybe build better flying machines.

Lutz’s other creations are also well worth a look, in particular her animated guide to how muscles work and a fluttering butterflies of North America poster.

Photo via KellyCDB/Flickr.com (CC BY 2.0)