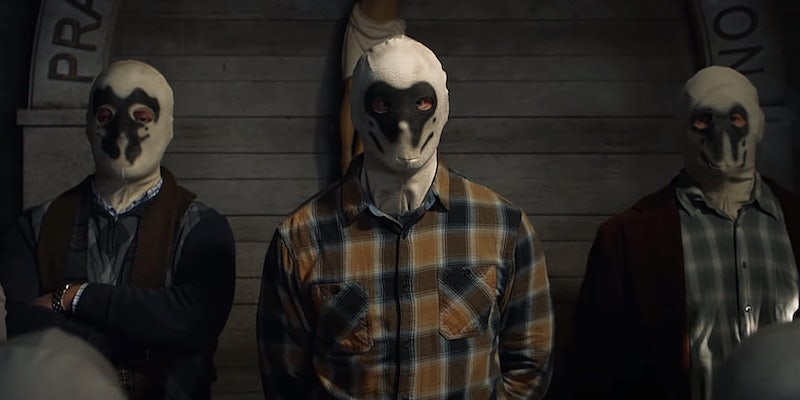 The show will tackle some hot-button issues regarding race and law enforcement in America.

Like the original comic, HBO’s Watchmen series will be an alternate-history story featuring some bold commentary on American politics. It depicts a version of present-day America where cellphones are banned, Robert Redford has been president for 28 years, and masked vigilantes are commonplace.

In a new interview with Entertainment Weekly, showrunner Damon Lindelof shared a deeper look at the new world of Watchmen, explaining how its political history differs from our own. There’s some impressively ambitious worldbuilding in there, although some of these ideas raise potential red flags about the show’s depiction of race and police brutality.

First off, Watchmen resists a traditional view of dystopian/utopian futures. In some regards, this world is “better” than our own, particularly how its version of America dealt with anti-Black racism in the 20th century. Its timeline diverged significantly after the Tulsa Race Riot in 1921, when mobs of white vigilantes attacked Black residents and firebombed the neighborhood known as “Black Wall Street” in Oklahoma, killing hundreds of people and leaving approximately 10,000 homeless. It’s a horrifying event in American history, but it’s so poorly taught (and arguably erased from the mainstream historical narrative) that Lindelof’s EW interviewer hadn’t even heard of it until he read the script for Watchmen’s pilot episode.

The pilot reportedly begins with a depiction of the massacre, which Lindelof characterizes as an educational moment: “A delivery mechanism for this piece of erased history felt right as long as it was presented in a non-exploitative way.” But in the Watchmen timeline, the U.S. authorities reacted very differently to these events, as Lindelof said:

“There’s also this legislation that’s passed, Victims OF Racial Violence Legislation, which is a form of reparations that are colloquially known as “Redford-ations.” It’s a lifetime tax exemption for victims of, and the direct descendants of, designated areas of racial injustice throughout America’s history, the most important of which, as it relates to our show, is the Tulsa massacre of 1921. That legislation had a ripple effect into another piece of legalization, DoPA, the Defense of Police Act, which allows police to hide their face behind masks because they were being targeted by terrorist organizations for protecting the victims of the initial act.”

This is a lot to unpack, but it already seems destined to be highly controversial with regards to real-life racism and police brutality.

On a structural level, Watchmen’s U.S. government was more proactive about institutional racism in the 20th century. So much so that (white) police were “targeted” for protecting Black citizens, implicitly positioning cops as the secondhand victims of racist violence. Under Redford’s liberal presidency—which seemingly evolved into a totalitarian regime—the government delivered reparations to victims of racism and eliminated fossil fuels. But this country also elected President Richard Nixon in 1969 and kept him in office until his death in 1985. It’s hard to see how these contrasting alt-history ideas can possibly fit together, but the show will obviously be more nuanced than the quick explanations we see in this interview.

The idea of masked police is a key element of the show, tying into a society where masked crime-fighters have been around for decades. Masked cops are framed as an opposing force to a white supremacist group wearing Rorschach-inspired masks, and Regina King stars as an Oklahoma detective who moonlights as the superhero Sister Night. The latest trailer digs into this imagery in a big way.

Watchmen’s masked police have obvious real-life parallels since plenty of cops are effectively masked already—either by wearing face-obscuring helmets and militarized uniforms or by hiding their badge numbers, which is a recurring issue in police brutality cases. You can also draw comparisons between the Rorschach gang and the KKK, or between masked vigilantes and antifa. The original Watchmen presented a complex, cynical view of law enforcement in America, and while some of Lindelof’s ideas sound politically dubious on paper, they’re too complicated to pre-judge before we’ve seen a few episodes of the actual show.

The EW interview also highlights Watchmen’s ambiguity, “avoiding moralizing” and leaving audiences to make up their own minds about contentious issues. Discussing his creative process for tackling controversial topics, Lindelof says, “You have to jump in with some degree of forethought and responsibility and then afterward you can ask yourself why you did it. The time for contemplation is not at the edge of the diving board because going back down the ladder is worse than the distance to the pool.” He added:

“I also kind of feel like, unfortunately, we live in a space where hate runs rampant not just on the internet but in real life and it’s important to remind ourselves this is a TV show. It is not real. Although it is dealing with real issues and it’s meant to generate and provoke conversations and emotions we have to contextualize that this is fiction.”

While HBO hasn’t revealed the rest of the writing team, Lindelof confirmed on Instagram that it’s a diverse group, with “Hetero White Men like myself [as] a minority.” As showrunner, he sought the perspectives of “women, people of color and the LGBTQ community,” going against the image of Watchmen as an icon of the gritty white male comics establishment. The overall impression is of a show that tackles hot-button topics in a nuanced and potentially problematic way without taking sides, and you know what that means: Everyone on the internet is going to argue about it forever.