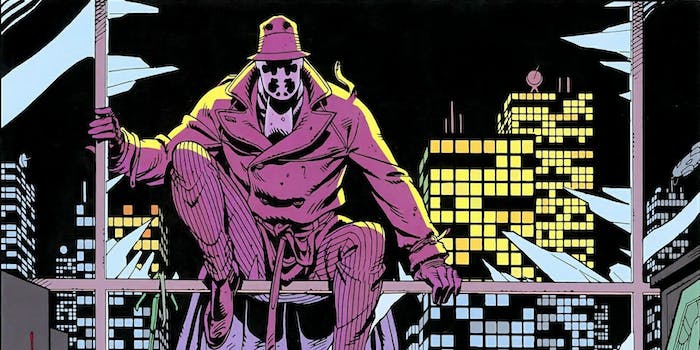 Rorschach’s internal monologue is one of the most distinctive elements of the Watchmen comics. So how did the 2009 movie get it so wrong? By giving Rorschach the deep, growly voice of Christian Bale’s Batman, it ruined an integral part of his character.

Even if you haven’t read Watchmen, you may still recognize his opening lines. Overlooking a crime-ridden New York street, he fantasizes about receiving recognition for his role as a vigilante. His journal introduces him as an obsessive investigator with a disturbingly violent moral code, fascinated and repulsed by his own warped view of America. He sees himself as a lone voice of purity in a world of corruption.

Rorschach’s writing style is distinctive in itself, reflecting a lineage of mass murderer manifestos from the Unabomber to Elliot Rodger. Misogynistic and paranoid, he offers extreme violence to anyone who falls short of his black-and-white morality. That journal gives straightforward insight into his political outlook, but if anything, his speaking voice is even more alarming.

Artist Dave Gibbons used different lettering for Rorschach’s dialogue, italicizing his words inside wobbly speech bubbles, suggesting an off-kilter mode of speech. There’s an obvious divide between his internal monologue and how others perceive him in person. His journal portrays him as a cross between Taxi Driver’s Travis Bickle and a noir detective, while his social behavior is disturbing in a different way. Here’s his first spoken dialogue from issue #1:

Rorschach is gross. His apartment stinks, he eats raw food at inappropriate moments, and he ignores social boundaries. He speaks in a truncated monotone, skipping words mid-sentence. In a callback to his mid-20th century superhero origins, he makes stupid puns while beating people up—something that feels much darker in an adult comic than in 1960s Batman. And we know he wasn’t always this way, because in flashbacks, his dialogue looks normal. His strange vocal cadence arrived later in life, as his vigilante mindset calcified into something more extreme.

None of this behavior is as “bad” as Rorschach’s rampant violence, but here’s the thing: Violence isn’t intrinsically shocking, especially in the context of Watchmen’s screen adaptation. We expect gritty vigilantes to be violent. Half the time we’re actually expected to sympathize with them. The thing that makes Rorschach unsettling in the comic is the way he transgresses against social norms. You can tell from other characters’ reactions that there’s something viscerally off about Rorschach, beyond his intimidating attitude.

It’s similar to the way Silence of the Lambs makes Hannibal Lecter so memorable. Any idiot can write a cannibalistic murderer, but Hannibal’s creepiness comes from the little moments, like when he sniffs Clarice through the bars of his cell. Rorschach’s equivalent is his unsettling monotone and his habit of doing things like slurping raw eggs while interrogating a suspect. By contrast, Zack Snyder’s version is straight out of central casting for a growly voiced, crime-fighting antihero.

Jackie Earle Haley is regarded as one of the best casting choices in Watchmen, and he certainly looks the part. It almost feels mean to highlight the problem of his voice, but when you reread the comic, it’s a glaringly obvious problem.

Since comics are a visual medium, Rorschach’s “voice” is obviously open to interpretation. But after painstakingly recreating specific frames from the book, it’s telling that Snyder envisioned Rorschach with this voice in particular. Yet another example of his career-spanning fixation with grittiness. By defining Rorschach by his most basic traits—a violent, nocturnal vigilante with a grim internal monologue—Snyder removed the parts that made him effective. He reduced Rorschach to the kind of character he was designed to critique. So on the off chance that the new Watchmen TV series includes Rorschach, please, for all our sakes: Don’t forget to make him weird.