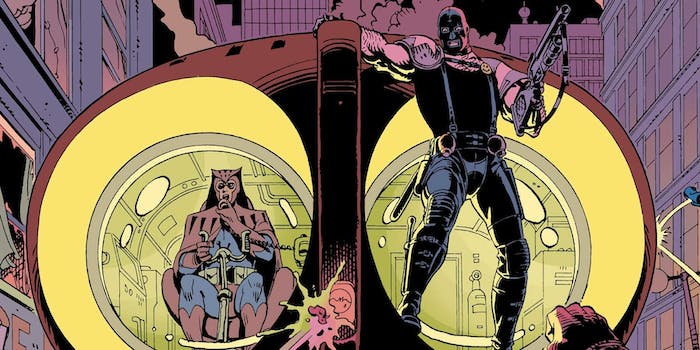 Damon Lindelof's spin on the classic finally has a cast.

HBO just announced the main cast for its upcoming Watchmen TV series, and it’s pretty surprising. Based on the iconic graphic novel by writer Alan Moore, artist Dave Gibbons, and colorist John Higgins, the new show will follow a different route than Zack Snyder‘s 2009 movie. The new show is more “inspired by” than a direct adaptation, telling a new story in the present day.

Variety revealed the cast list on Wednesday. Regina King (The Leftovers) will play the lead character, with a supporting cast including Don Johnson, Tim Blake Nelson, Louis Gossett Jr., Adelaide Clemens, and Andrew Howard. Their roles are still under wraps, but many of them will be new characters. Our one clue is that the show will also “revisit the past century of Costumed Adventuring through a surprising yet familiar set of eyes.” So, expect some flashbacks to more familiar characters in the 20th century.

Damon Lindelof will helm the series, his first project after The Leftovers. He’s no stranger to sci-fi and comic book work, having previously worked on Star Trek Into Darkness, Prometheus, and Cowboys & Aliens.

Earlier this week, Lindelof posted a letter on Instagram, explaining why his Watchmen would stray from the source material. “We have no desire to ‘adapt’ the twelve issues Mr. Moore and Mr. Gibbons created thirty years ago,” he wrote. “Those issues are sacred ground and will not be retread nor recreated nor reproduced nor rebooted. They will however be remixed.” He acknowledged the controversy around such a project because Alan Moore is famously unhappy about screen adaptations of his work. HBO’s Watchmen will exist against Moore’s wishes, and Lindelof is attempting to explain his decision to ignore those wishes and make the show.

The original Watchmen satirized and deconstructed classic superhero comics, and some of its nuances were lost in the 2009 movie. Ten years later, a modern-day spinoff could be more successful. Superhero movies are ubiquitous now, and their tropes are more familiar to the average filmgoer than, say, the politics of Silver Age Batman. Watchmen explored what our obsession with superheroes tells us about ourselves, and the time is ripe to revisit that idea.