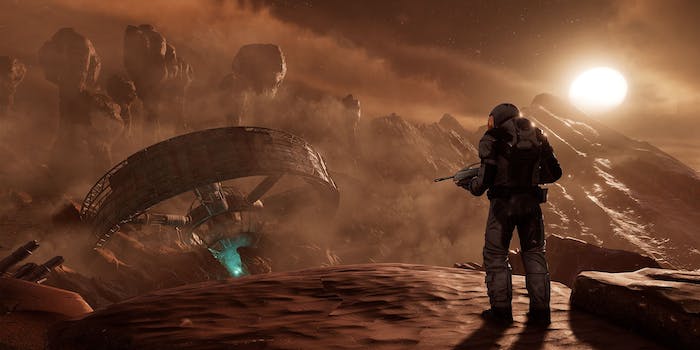 A brand new controller may be the key to proper FPS games in VR.

I felt no fear as the 100-foot-tall alien spider creature smashed its way out of a cave and loomed overhead. I didn’t have to just stand there and look at it; I could run.

Among the games shown at the PlayStation VR event hosted by Sony after its E3 press conference was Farpoint, a PS VR exclusive. In Farpoint you’re an explorer strapped into a space suit, walking the surface of a red planet that looks an awful lot like (but is not) Mars. Insectoid aliens of all shapes and sizes crawl out of the rocks and burrow out of the sand around you.

Like any good space explorer you are armed with an assault rifle, because of course you’ve seen enough movies to be ready for the inevitable attack of the space bugs.

First-person shooter games in VR are usually shooting galleries where the player stands relatively still while mowing down enemies. Even in standing room-scale VR shooters like Space Pirate Trainer on the HTC Vive (where you can dodge and weave in-between blaster fire) you’re limited to a very small play area that you cannot leave. It’s still effectively a shooting gallery.

If there is free movement through a level in a first-person VR game like Vanishing Realms or Budget Cuts on the Vive, or the Bullet Train demo on the Oculus Rift, it’s usually accomplished via the familiar “blink” system where you point at the place you want to move and then teleport, or blink, to that position.

In Farpoint, however you have free movement within a level just as you would in any other first-person shooter, without the need for blinking. Farpoint is the closest thing to a proper FPS game built specifically for VR that I’ve played in four years since the earliest VR tech demos.

And it’s very strange, considering how VR represents the cutting edge of current technology, that Farpoint is built around what is essentially a failed peripheral from the previous console generation. 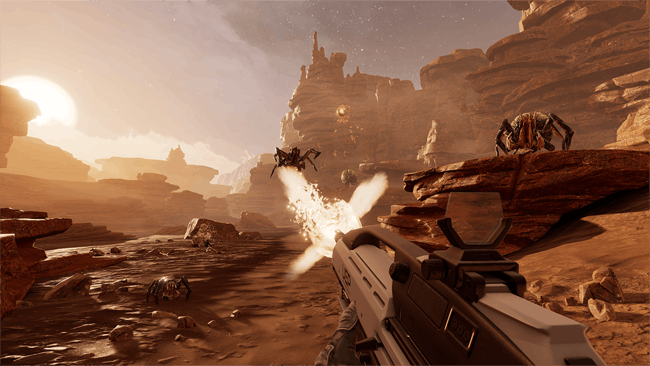 PlayStation Move was introduced in 2010 as a peripheral for the PlayStation 3. Where Microsoft tried to capitalize on the motion control gaming phenomena pioneered by the Nintendo Wii by developing the Kinect camera, Sony developed hand controllers for motion control games. 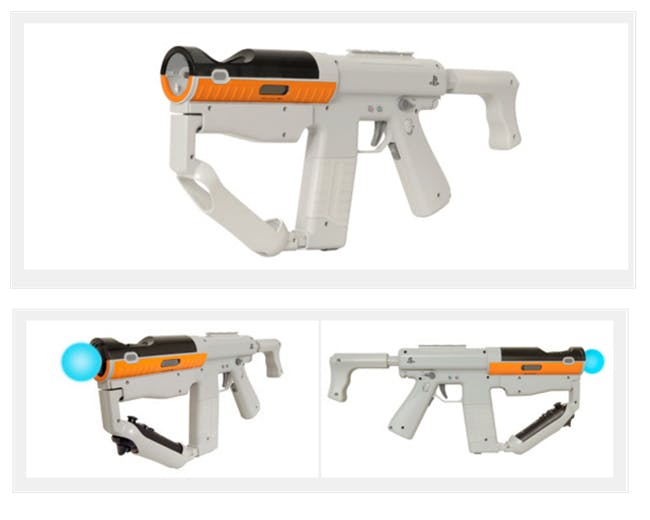 Sony also released a PlayStation Move peripheral called the Sharp Shooter. You slid a Move controller in where the barrel would be and a Navigation controller in a sleeve just underneath the barrel.

The Sharp Shooter may have failed to make an impact on the previous console generation, but its influence lives on with Farpoint. According to Randy Nolta, co-founder of game development studio Impulse Gear, the Sharp Shooter was part of the genesis of the idea for Farpoint.

“Impulse Gear was founded with the core idea of making core games for VR,” Nolta said. “Last year at E3 we were actually showing a tech demo behind closed doors that used a modified Sharp Shooter to kind of showcase the same type of movement that you’re seeing here today with Farpoint. And today is just kind of a more refined version of it.”

Farpoint utilizes a brand new peripheral called the PS VR Aim Controller, that Impulse Gear developed in conjunction with Sony Interactive Entertainment. The DNA of the Sharp Shooter is obvious when you examine PS VR Aim, only now the PS Move and Navigation controller components are built into the housing of the controller, versus being components that you have to purchase separately and then insert into the peripheral. 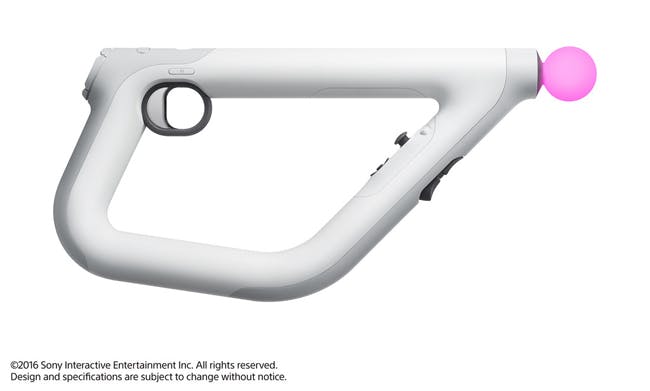 In Farpoint you use the joystick that’s located underneath the “barrel” of the Aim controller to move, just as with the Sharp Shooter. You look around by actually looking around, and you aim the weapon by actually aiming the weapon.

The Aim controller was shockingly accurate at close range without my having to think about it very much. For long-range shots, tracer fire is the key to hitting your targets. The default assault rifle weapon doesn’t run out of ammo. It only overheats and has to cool down if you hold the trigger down for too long. Without the need to worry about wasting bullets, you can use tracer fire to walk your shots up to targets downrange and still shoot with surprising accuracy.

The PS VR Aim Controller has accomplished what the Sharp Shooter never could, because the Aim controller is not a peripheral pointed at a television screen. It’s effectively with you inside the simulation like any other VR hand controller, which means all your natural abilities to aim and shoot can be tapped into. And if you’re a first-person shooter player, you may have had decades of practice at this.

“Early on we had the idea that we wanted to do something with shooters,” Nolta said, “and it started really with that, that modified version of an input device that we kind of created in the backyard, so to speak.”

The experience of moving freely in a FPS game in VR took some getting used to during my demo, and the potential complications were clear. Turning and looking around while moving made me queasy. That might have as much or more to do with the limitations of the PS VR rig, i.e. lower screen resolution and frames per second than either the HTC Vive or Oculus Rift, than with the experience of playing Farpoint specifically.

This is why other VR shooters use the blink movement system. When you teleport between points either the screen fades to black or the teleport is so quick that your eyes don’t have time to register motion. Impulse Gear is trying to solve an issue that plagues all FPS games in VR, and that no one has a better solution for other than blinking around. 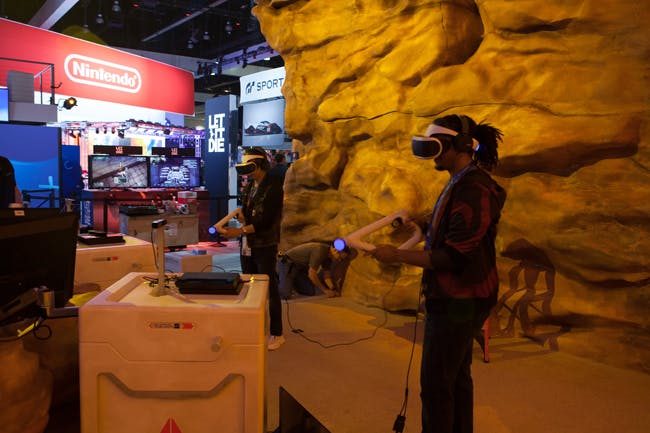 Developers from Impulse Gear set up the Farpoint demo booth at E3.

“I think part of the fact that it is a challenge is what has kind of driven us to take it on,” Nolta said. “We definitely started really simple early on, and some of the early tests weren’t great. I mean, obviously you’re kind of designing and you’re trying to find a really good formula, a good way to play this type of game in VR, but make it feel like it’s natural. It’s very difficult.“

There was one aspect of my Farpoint demo experience that was unique compared to all my experiences playing FPS games in VR. Every time I started to move forward in Farpoint, I felt a corresponding twitch in my thigh muscles.

It was as if my body was so immersed in the illusion that my muscles were trying to get in line. And for all the challenges of designing a game like Farpoint, I took that twitch as a sign that Impulse Gear is on the right track.

Even if and when Nolta and the other developers working on Farpoint completely eliminate any questions of motion sickness, there are still other basic elements of FPS games that Impulse Gear hasn’t yet been able to replicate in VR and lots of work to be done solving other problems that no one has solutions for.

“One of the biggest things that we’ve wanted to do that we’re still exploring, but it probably won’t make it into Farpoint is using scopes that allow you to look into the distance,” Nolta said. “Magnified scopes, basically. It’s something that we haven’t been able to tackle yet. But this is what’s interesting about VR, right? There’s constantly new challenges, new things that you’re trying to solve, and we’re trying to figure out the best ways to solve them.”