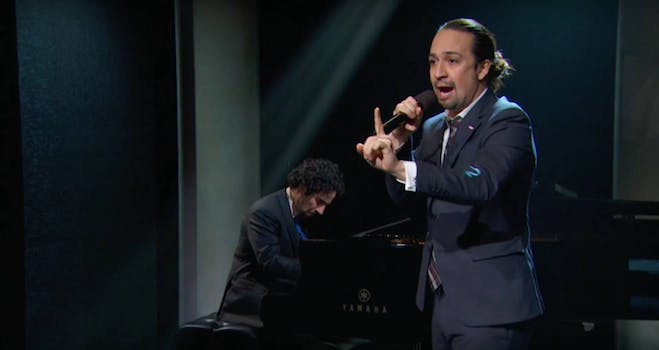 #HamOfThrones is the mashup you never knew you always needed

What do you get when you combine 'Hamilton' and 'Game of Thrones' on Twitter? Awesomeness.

Lin-Manuel Miranda’s hit Broadway show Hamilton has numerous relatable themes: working hard for what you want, struggling for power, and murdering your enemies to get ahead. OK, that last one is a little extreme, but it does happen in some places. Like, say, Westeros.

On Wednesday, Lin-Manuel took to Twitter (as he often does), and shared a tweet where he combined a Hamilton lyric with an image from Game of Thrones.

Because both Hamilton and Game of Thrones have such huge fandoms online, Twitter went, well, ham for #HamOfThrones. And thus, a new revolution was born.

"I strike him right between his ribs" @Lin_Manuel #HamOfThrones pic.twitter.com/dLBxmshcu5

"If it takes fighting a war for us to meet it will have been worth it." @Lin_Manuel #HamofThrones pic.twitter.com/okxMUuGxeN

There's a little surprise before supper and it cannot wait…#HamOfThrones @Lin_Manuel pic.twitter.com/ag5bb7Ne6m

Even I had to get in on the fun.

In Lin-Manuel’s tweet he asks if this has been done before, and after some Twitter sleuthing, I discovered that it isn’t the first time someone has thought to combine these two powerhouse productions. This time, however, with LMM’s blessing, Twitter came to play. Hundreds of mashups were created, retweeted, and liked.

Everything that Lin-Manuel touches turns to gold. Now, is there any way we can get him to talk to the Game of Thrones producers about Hodor?