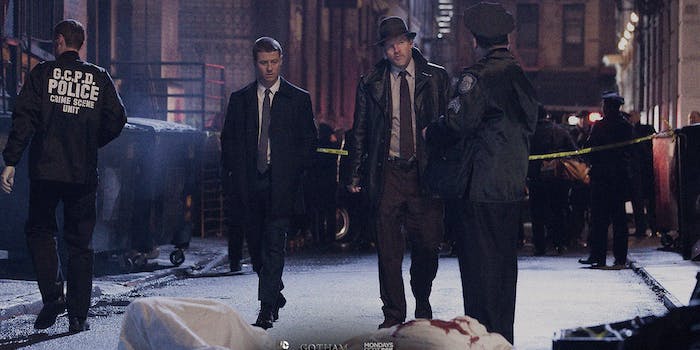 Early 'Gotham' will only get tougher.

Gotham is one of the most hotly anticipated new shows of the season, and is virtually guaranteed a massive audience. However, it’s difficult to tell from the first episode whether it’s actually any good.

The city of Gotham is populated by mobsters, dirty cops and familiar Batman supervillains in larval form. As a result, the first episode of Gotham the TV show is populated by familiar crime drama stereotypes: the hero cop in a bad town, his gorgeous blonde girlfriend with a classic TV girlfriend job (gallery curator, which apparently pays enough to afford a palatial penthouse apartment), mob goons with names like “Butch,” and unshaven street thugs.

some clever foreshadowing on #Gotham: -“My name is Mr. Oker, but you can call me Jay.” -“The Flying Graysons were great. Hope they dont die”

The main hook of Gotham is that it’s meant to work as a standalone cop show. The first scene sees teenage Catwoman witness the death of Bruce Wayne’s parents and the rest of the episode is crammed with familiar characters, but the basic structure follows Jim Gordon’s introduction to the crookedness of the Gotham police department.

The trouble is, Gotham is a relatively family friendly crime procedural drama airing on network TV. It’s meant to be a gritty, morally ambiguous tale of bad cops and organized crime, but the gun-wielding, perp-punching Gotham police are actually no more violent than the good guys in most mainstream U.S. cop shows—and, for that matter, in real life. Whether this can be interpreted as a commentary on real-world police brutality is up for debate.

Ok, so Gotham’s going to have a much harder time selling Harvey Bullock in a world where Ferguson exists.

DC Comics fans will probably be the most critical of Gotham, but they only make up a fraction of the show’s target audience as a mainstream crime drama. Still, the pilot episode will probably satisfy those who were concerned Gotham would have few links to the comics. Almost every well-known Batman villain except the Joker has been partially introduced, along with familiar characters like Barbara Kean, Renee Montoya and Harvey Bullock. Plus, the show is already developing one of its most intriguing conceits: introducing a new potential Joker in every episode. (This week’s was a comedian in mob boss Fish Mooney’s nightclub.)

So far all the Easter Eggs in the @Gotham pilot are awesome, Poison Ivy, Solomon Grundy, Scarecrow’s father, Barbara’s apt is Oracle’s hq.

Comic book adaptations always have a far wider audience than the original source material, and it’s possible that Gotham may struggle to bring in the kind of fanbase achieved by the Marvel Studios franchise. One of the most common criticisms of DC adaptations is that they often focus on the perceived interests of the stereotypical white male fanboy. Luckily, as an ongoing show with an ensemble cast, Gotham has the opportunity to introduce many more female characters than we saw in the Dark Knight franchise or Man of Steel.

Among the four main female characters so far, the most three-dimensional is probably Jada Pinkett Smith’s ruthless Fish Mooney. Teen proto-Catwoman Selina Kyle only shows up for a couple of minutes in the season premiere, and the most interesting thing about Jim Gordon’s girlfriend Barbara Kean is that she may have a romantic history with rival cop Renee Montoya. Gruff, tough Jim Gordon, Harvey Bullock, and Alfred Pennyworth look like they will be front and center in the show, along with 12-year-old Bruce Wayne and the Penguin.

Not impressed with Gotham’s weird always dressed up always perfect hair female characters that only talk about the male lead so far :/

Unsurprisingly, there’s already a lot of debate online over whether Gotham is sexist or not, although it’s probably unfair to judge this by a single episode. A fifth female character, police captain Sarah Essen, only appeared in a minor role this time round but will probably develop later on, although it’s very easy to believe that Barbara Kean will never evolve past the thankless role of “girlfriend.”

For the moment, viewers can’t even seem to agree on whether the episode passed the Bechdel test or not, since Barbara Kean and Renee Montoya’s brief conversation mostly focused on Jim Gordon. What we can be sure of is that any conversations including women were definitely outnumbered by scenes where middle-aged white men growled at each other about crime.

Well, at least GOTHAM passed the Bechdel Test. With an A+. If you know what I mean. (IT’S BECAUSE THEY WERE LESBIANS.) #spoilers

Like many pilot episodes, Gotham’s introduction was painted in broad strokes. The plot was obvious, the characters were simple, and most people spoke in by-the-numbers crime TV dialogue. Any of these criticisms might easily be erased by future episodes, particularly since the show cannot fail to get darker and more complex as it progresses. After all, Jim Gordon inevitably has to fail in his quest to clean up Gotham.