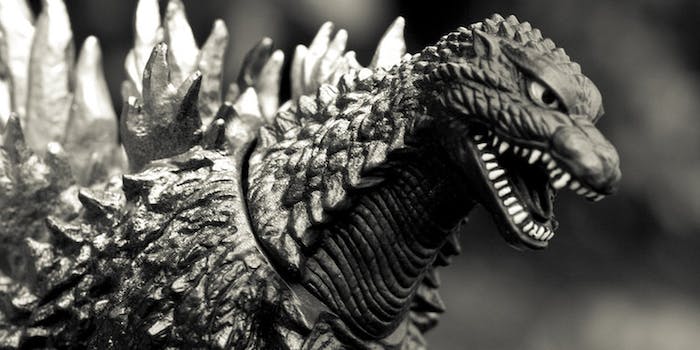 These die-hard ‘Godzilla’ fans build their own monster suits

"To feel what it's like to stomp around and smash small cities, it's a childhood dream come true."

Godzilla is opening in theaters across the U.S. today, and to celebrate, we’re honoring the fans who love the legendary king of monsters best.

Many moviegoers will see Godzilla as just another summer blockbuster, a popcorn flick with just the right amount of raw destruction, huge creatures, and human triumph to make you forget your over-due taxes for a few hours. Even for the more discerning cinefiles who are aware of the historical importance of Godzilla in film, it can be less about the monster than it is about critiquing the movie’s acting, analyzing the digital effects, and taking snipes at how the original was so much better than the 2014 descendant of the franchise.

But, if these folks are the Christmas-and-Easter Christian equivalents of Godzilla fans, there are also devotees in the crowd who worship every Sunday at the altars of Godzilla, Mothra, Rodan, and all their monstrous friends and enemies. These are the men and women who attend Godzilla conventions, write Godzilla fanfic, and wax lovingly about Destroy All Monsters.

Part of Godzilla’s greatness, and what makes the franchise so important in the history of film, are the advancements it made in special effects. When Ishirō Honda directed the first Godzilla film in 1954, he and his team had to invent ways to bring the monster to life for movie-going audiences. They were inspired by King Kong (1933), but stop-motion animation was too costly for the Toho Co. production studio, which just wanted the movie done—and fast.

Instead, they engineered a latex Godzilla suit for a stuntman to wear. It was hideously uncomfortable—hot, heavy, and suffocating. Yet the combination of meticulously constructed miniature sets and the comparatively massive monster had mesmerizing results. Toho went on to make 27 more Godzilla movies and its production teams continued to innovate.

The Godzilla suits and the monster’s appearance changed over the years as he went from terrifying, destructive monster to friendly (and still destructive) monster. Fans have lovingly catalogued these suits, but some have gone even further to create G-suits of their own.

There is, in fact, an entire community of people who not only create their own DIY Godzilla costumes, but who record and share the process with others who want to do the same.

Just check out some of these videos:

Jim Fazar runs the website Becoming Godzilla, where he posts cool pictures and tutorials from folks who built their own Godzilla suits. He said the urge to recreate the costume really just comes from a life-long love of the films.

“I think most people build a DIY suit because they’ve always wanted to be ‘that guy in the suit,’” Fazar wrote in an email to the Daily Dot. “To feel what it’s like to stomp around and smash small cities, it’s a childhood dream come true. Another reason is the reactions you get from people. They are in awe and their faces light up! It’s a good feeling to make others happy… it’s really a rush.”

I mean, how could you not feel pure joy with this guy lumbering at you?

“I think people are nostalgic about Godzilla because many of today’s adults watched the movies during their formative years,” Fazar said. “The movies weren’t on that often, so when it did come on you sat there and didn’t move until it was over. As fans got older and realized it was just a guy in a suit they either snubbed Godzilla cause it wasn’t cool, or kept him close to your heart ‘cause it reminded you of a simpler time. And in this new era of CGI, the old Godzilla (or man in the rubber suit) is the underdog and it’s always fun to root for the underdog.”

Though the fandom surrounding Godzilla is primarily dedicated to the classics (Roland Emmerich’s 1998 Godzilla flop can safely be shunned), it seems many are not snobs when it comes to modern updates of their beloved monster.

But even the most die-hard Godzilla fan might find it hard to take issue with the design of the new monster. Director Gareth Edwards has gone out of his way to pay homage to the classic look of the original Godzilla. If you’ve checked out the trailers, you know the new monster looks so strikingly like a massive, computer-generated, guy-in-a-suit Godzilla, that he’s been accused of being “too fat.”

And unlike the 1998 movie, which has a pitiful 25 percent “fresh” score on Rotten Tomatoes, the early reviews of the reboot are looking promising, with Bryan Cranston leading the cast.

Let’s be honest, when it comes to story and acting, none of these movies were ever Citizen Kane. What fans love are the wacky plots, the once-innovative special effects that now look laughly primitive, and most of all, the rich world of monsters. Monsters who throw punches and level city blocks.

These movies are just fun, and that’s really what fans are hoping for when Godzilla stomps into theaters later today.

“I’ve had my tickets for about three weeks and I’ll be going to the IMAX 3D showing tomorrow night at 7,” Fazar said on Wednesday. “I hope I can sleep tonight.”

Photo by Sebastian Dooris/Flickr (CC by 2.0)