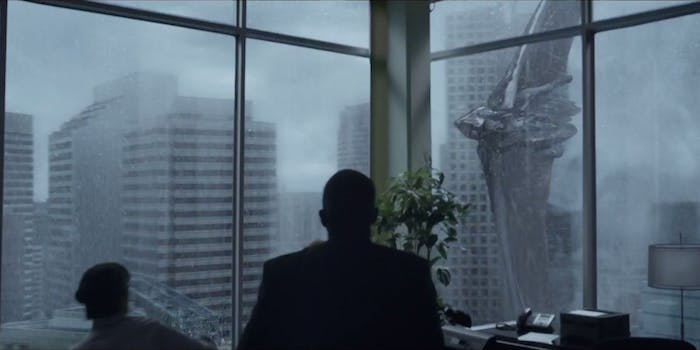 New ‘Godzilla’ trailer reveals the return of an old enemy

That's a whole lot of Godzilla

Ladies and gentlemen, we have Mothra. Repeat, Mothra is among us.

After the last Godzilla trailer appeared, fans of the classic kaiju franchise took to crafting elaborate speculation and discussion about whether the iconic Mothra twins—you know, the two salmon-pink fairies who call upon Mothra by yodeling—had been spotted in the film. If they showed up, it meant the giant Godzilla-fighting moth-creature would almost certainly be making an appearance.

Monday, Warner Bros. tantalized us even further with the surprise release of the extended Asian trailer. But there’s one thing that they definitely didn’t tease us about.

Dude. This movie is epic. Maybe it’s because the Asian trailer is saturated with Ken Watanabe’s husky Inceptiony voice-over, and long, lingering shots of Gojira’s mighty CGI destruction of Tokyo.

Or maybe it’s because, yes, hello, that’s a giant moth on your screen.

We’re going to go see this movie 80 times. We’re going to drag our friends to it and then make them stay while we sneak back in to rewatch. We’re going to convince our cranky relatives we don’t even like that much that going to see Mothra and Godzilla duke it out in stadium seating will make them feel young again. After all, nothing says ’50s nostalgia like giant green monsters and massive planetary destruction.