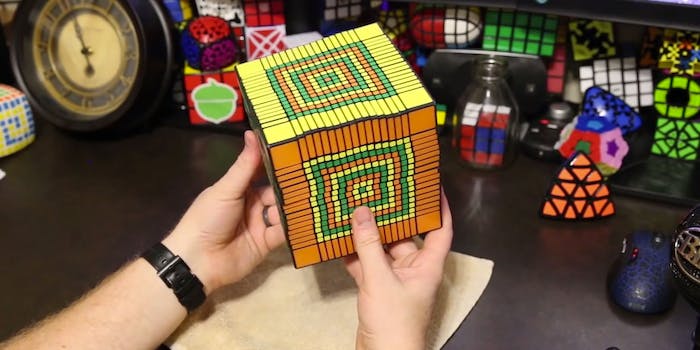 Only two people have ever solved this complex 3D-printed cube.

Now, puzzle fan and “twisty puzzle” solver Kenneth Brandon, better known as YouTube user RedKB, has tackled one of van Deventer’s Over-the-Top cubes to see how long it takes to solve one in real time.

Luckily for us, if you don’t have five days to spare, you can watch the whole vibrant process in time-lapse form. It’s still over six minutes long, but it’s an oddly soothing process.

Brandon’s solution involves breaking the puzzle assembly into parts, so that the 17 rows get dealt with as though they’re just a regular 3×3 Rubik’s Cube. Once he reduces them to that pattern, “It’s like a big Rubik’s Cube with huge centers, long skinny edges, and tiny corners.”

Even cooler, he also uploaded a version that’s just him making cool patterns out of the endless possibilities afforded by the multi-layered puzzle.

Van Deventer’s original puzzle is a 3D-printed invention that has only been replicated a few times due to the expense of printing something so complex. The fully assembled version contains a jaw-dropping 1,500 pieces. You can see van Deventer’s demonstration of the original, world-record-breaking prototype here.

And if you’re really feeling up for a challenge, Brandon has uploaded the entire eight-hour footage of the puzzle solution, complete with his commentary about the process as he goes.

Even though it’s long, it might be a good idea to watch it. After all, if knowing how to solve even a “simple” 3×3 Rubik’s Cube can get you out of a speeding ticket, there’s no telling where solving one of these monsters will lead.