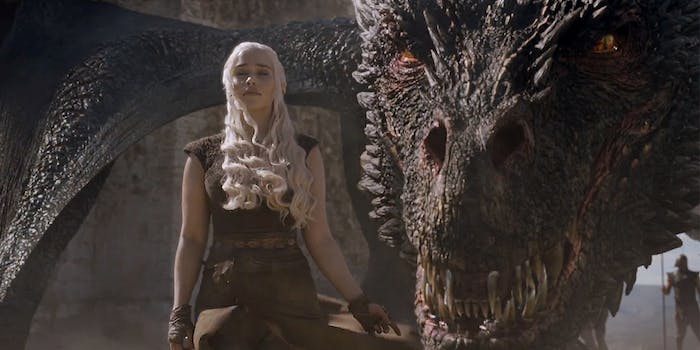 Last week fans discovered that George R.R. Martin would publish a new story set in the A Song of Ice and Fire universe as part of a fantasy anthology after stumbling on an Amazon page for it. Not only did Martin confirm it, but he also gave fans an update on what we can expect.

The story, which Martin revealed on his LiveJournal is called “The Sons of the Dragon,” will appear in The Book of Swords, a fantasy anthology edited by his good friend (and frequent co-editor) Gardner Dozois. While he hasn’t read any of the other stories set to appear in the anthology, he has high hopes based on the list of authors.

As some surmised earlier before the title came out, “The Sons of the Dragon” will center around the Targaryens much in the same vein as “The Princess and the Queen” and “The Rogue Prince.”

“It’s water from the same well,” Martin wrote. “A history rather than a traditional narrative. A lot of telling, only a little showing. (The opposite of what I do in my novels). But if you’re fascinated by the politics of Westeros, as many of my readers seem to be, you should enjoy it. As the title suggests, “The Sons of the Dragon” chronicles the reigns of the second and third Targaryen kings, Aenys I and Maegor the Cruel, along with their mothers, wives, sisters, children, friends, enemies, and rivals.”

“The Sons of the Dragon” is an abridged version of a story that he’s already written. He originally wrote detailed histories of the Targaryens years to include as sidebars in The World of Ice and Fire, but he ended up with too much information to fit the book. He cut most of it out, leaving “severely abridged versions of the mains events” in the books. His stories, like “The Sons of the Dragon,” are excerpts of what make up the full version of that history, which will one day appear in Fire and Blood, a fake history book he has also called the “GRRMarillion.”

Although Martin didn’t edit or write a story specifically for Dozois’ anthology, which he clarified for readers, he had the story lying around and it felt like would be a good fit. For some fans, it might even be a familiar story.

“Gardner asked me for a story. I told him I did not have the time to write a story. He asked if perhaps I had more like ‘The Princess and the Queen’ lying about… as it happened, I did,” he said. “So I sent him “The Sons of the Dragon,” he liked it, and there we are. (Fwiw, though “Sons” has never been published before, some of you may have heard me read it at one convention or another. I think I’ve read it twice, though offhand I do not recall when).”

The Book of Swords will be released Oct. 10.