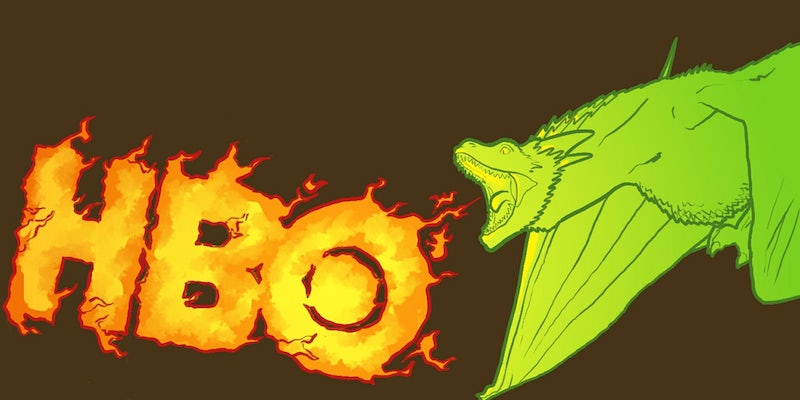 A report claimed the movie would be a prequel.

Will Game of Thrones make the leap from Westeros to the silver screen?

While HBO has aired two episodes of its hit fantasy series in IMAX theaters in the past, a recent report from Daily Star Sunday claims that Game of Thrones will be turned into a “blockbuster movie” after the series ends. The show is set to run for eight seasons, although HBO is open to a prequel series or a spinoff.

According to the report, A Song of Ice and Fire author George R.R. Martin, who also is a producer on Game of Thrones, said that “there will be a movie but I will not be involved” at the HBO Party following Game of Thrones‘s historic night at the Emmys.

“I have too much to do,” Martin said, according to the Daily Star Sunday. “That is something HBO and the DB [Weiss] and David [Benioff] are dealing with. I have two more books to finish and I still have so much to do.”

Martin also mentioned the pressure of writing the books when it comes to fans’ expectations.”

A “production insider” source corroborates Martin’s quotes to the Daily Star Sunday, explaining how the possible Game of Thrones movie has plenty of material to use if there was a prequel movie—and it could even bring back characters who are dead in the show.

“With the Game of Thrones universe there is much rich material and no constraints on when that story will take place,” the source told the Daily Star Sunday. “They are looking at dipping back in time during certain periods of the series, which could be examined as a one-off plot. That means that some of the big characters who fans have seen die on screen could be resurrected such as Robb Stark, Catelyn Stark, Oberyn Martell The Red Viper—and Ned Stark.”

HBO, Benioff, and Weiss would have a plethora of material to use if they intended on making a prequel movie. There are The Tales of Dunk and Egg novellas, which take place about 100 years before the events of Game of Thrones and are about to be published together under the title A Knight of the Seven Kingdoms. You have Robert’s Rebellion—and the direct aftermath of overthrowing the Targaryens. (Although we will see at least one snippet of that next season.) The companion book A World of Ice and Fire has thousands of years of Westerosi history to pull from, each excerpt compelling in its own right. They could, if Martin gives them the information, see a film focused on any of the characters, dead or alive.

Except according to Martin himself, there’s not a movie in the works.

On a blog post about the cancellation of a mural installation at the theater he owns in Santa Fe, New Mexico, a fan took the time to ask Martin about whether his comments on a movie about Robert’s Rebellion were false.

Although Martin said last year that Game of Thrones “might need a feature to tie things up, something with a feature budget,” Martin insists that there is no movie in the works right now.

“Yes, completely false,” Martin wrote. “No one is working on any movie just now. And if there was a movie, it would not be about Robert’s Rebellion.”

And after pointing out the question was off-topic from his blog post, as Martin does with most questions about ASOIAF and Game of Thrones, it was back to business as usual.

Update Oct. 1, 6:54am: Martin posted a detailed takedown of the rumor on his LiveJournal page Sept. 30:

Don’t believe everything you read, boys and girls. Especially not on line.

I don’t know where this latest round of “there’s going to be a GAME OF THRONES movie” nonsense is coming from, but suddenly it is everywhere, and all of us connected with the show and HBO are being bombarded. But nothing has changed.