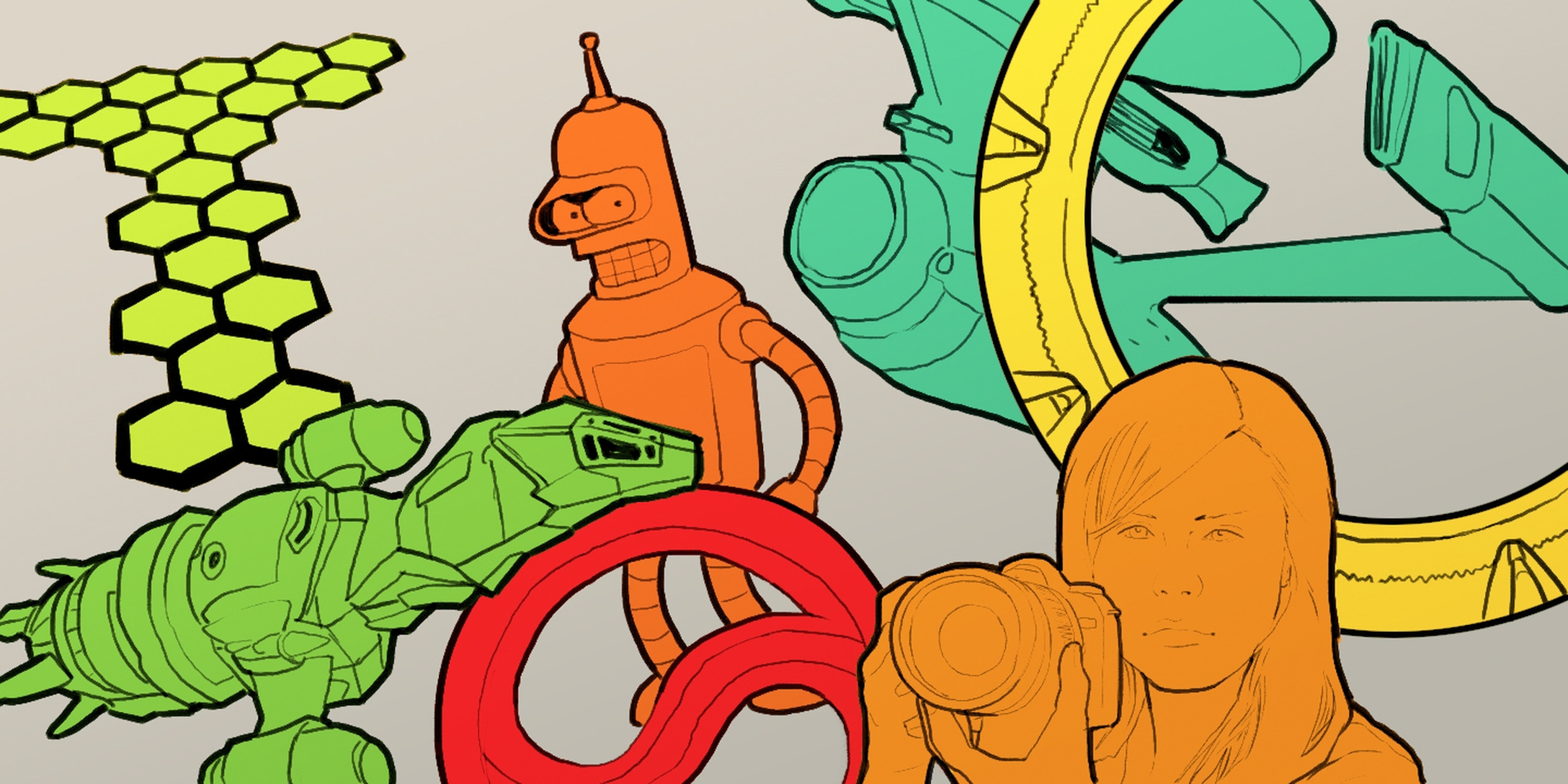 An illustrated guide to your favorite canceled cult TV shows

How likely are your favorite cult shows to get a renewal? Check this chart.

We’ve recently seen a surge of beloved TV shows being renewed after years off the air. Twin Peaks is the obvious example, returning after more than two decades for a new series starring the original cast, but we’re also about to see more of the X-Files and almost certainly a Xena reboot as well.

These surprise renewals bring hope to the fans of long-canceled shows like Firefly and Veronica Mars—but does your favorite show really have any chance of resurrection?

We took a look at some of the most popular shows to be canceled before their time, and tried to figure out their chances of renewal from beyond the grave. 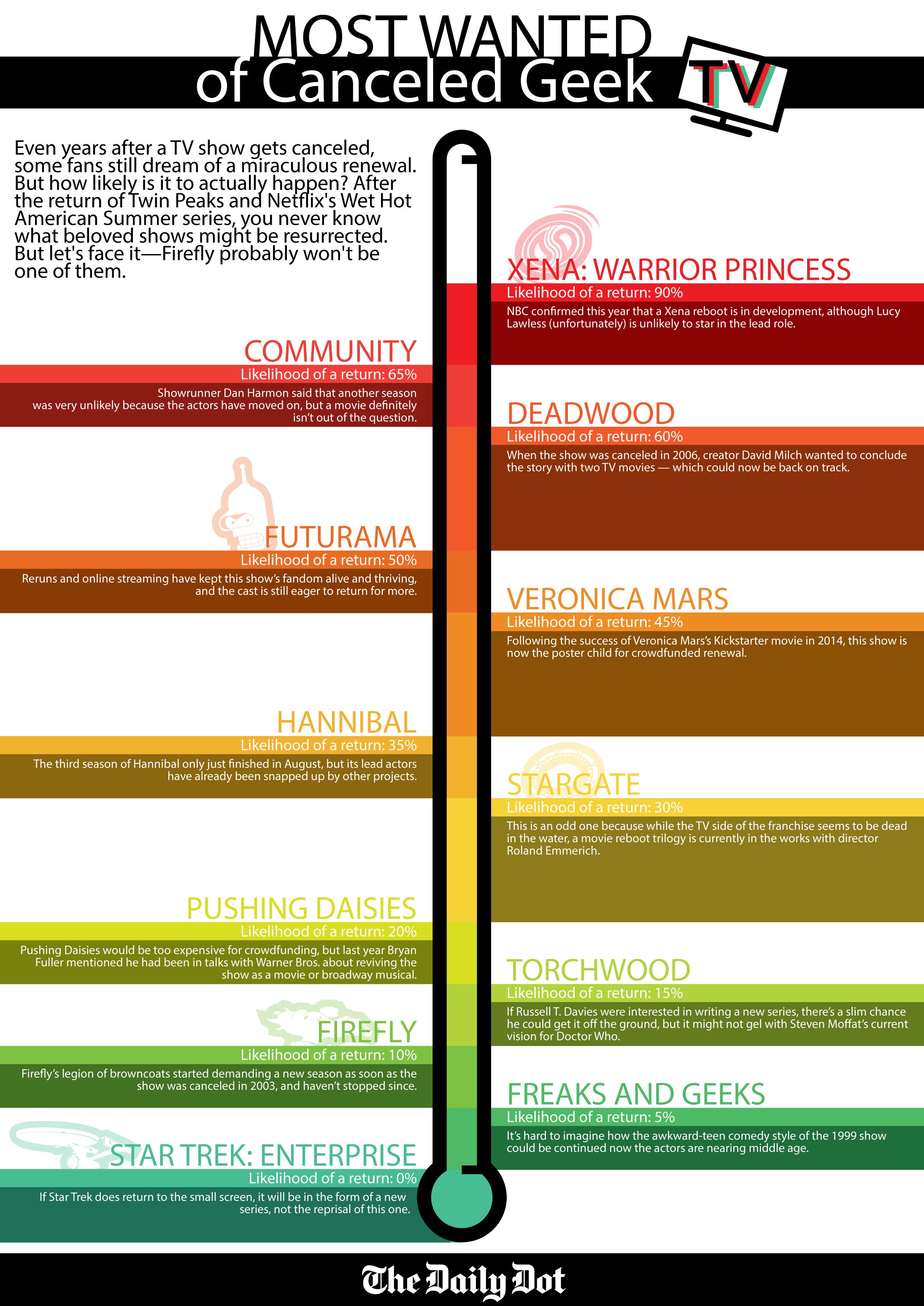 Come on. We don’t need to tell you who Xena is.

NBC confirmed this year that a Xena reboot is in development, although Lucy Lawless (unfortunately) is unlikely to star in the lead role.

Now, all they have to do is make a pilot episode that warrants being turned into a full show. If NBC can manage it with Heroes Reborn, a show that nobody really wanted in the first place, then surely they can do it for one of the most popular fantasy series of all time.

We’re putting this one at 65 percent due to the resilience of Community’s “six seasons and a movie” slogan. Against all odds, fans got their sixth season after the show was dropped by NBC and picked up by Yahoo!, so why not a movie as well? Showrunner Dan Harmon said that another season was very unlikely because the actors have moved on, but a movie definitely isn’t out of the question. Combine this with Community’s unusually active fandom, and we can definitely see some kind of reunion happening in the next few years.

This award-winning HBO western is famed for its profanity-fueled dialog.

Creator David Milch wanted to conclude the story with two TV movies after the show was canceled in 2006, but by 2010 most of the cast had abandoned any hope of this actually happening.

To everyone’s surprise, rumors surfaced in August 2015 that the duo of Deadwood movies were back on track. An HBO representative confirmed that they had recently had “preliminary discussions” about a revival, meaning Deadwood may well be the latest show to jump on the belated renewal bandwagon.

A full-series return seems unlikely for this adult sci-fi animated series from Simpsons creator Matt Groening, but it’s not out of the question. Reruns and online streaming have kept this show’s fandom alive and thriving, and the cast is still eager to return for more. Plus, Futurama was already resurrected twice before, first with a series of straight-to-video films and later on Comedy Central after leaving its original home at Fox.

We can easily imagine another Simpsons crossover episode or single-serving TV movie, at the very least. A Christmas episode, maybe?

This noir-inspired teen detective show recently got a movie sequel thanks to a massively popular Kickstarter campaign.

Following the success of the 2014  movie project, Veronica Mars is now the poster child for crowdfunded renewal. Creator Rob Thomas said as recently as July 2015 that he wanted to make a sequel movie or miniseries, comparing the show to True Detective. At the moment he’s busy with his new show iZombie, but we have confidence that those Veronica Mars marshmallows have the patience to stay interested for sequel.

Bryan Fuller’s artistically ambitious adaptation of the cannibal thriller was beloved by critics but dropped by NBC due to low ratings.

The third season of Hannibal only just finished in August, but its lead actors have already been snapped up by other projects: Mads Mikkelsen on a Star Wars movie and possibly Doctor Strange, and Hugh Dancy on a new Hulu series called The Way. With Fuller already working on Neil Gaiman’s American Gods, a fourth season seems unlikely.

The best we can realistically hope for is some kind of movie sequel, spurred on by the show’s widespread critical acclaim and horde of fannibals. Both Fuller and the lead actors have made it very clear that they want to continue the story, though.

This is an odd one because while the TV side of the franchise seems to be dead in the water, a movie reboot trilogy is currently in the works with director Roland Emmerich.

Unfortunately this reboot will have no connection to the TV universe, but fans will be glad to know that many of the Stargate actors and writers from TV are still working in other sci-fi shows such as Dark Matter on Syfy.

Bryan Fuller’s candy-colored comedy drama about a lovable pie-maker who can bring people back from the dead is a staple of “canceled before their time” lists. It’s beloved for its distinctive visual style and fast-paced dialog.

Veronica Mars creator Thomas said that Fuller once asked him for advice regarding a Kickstarter campaign, but decided that Pushing Daisies would be prohibitively expensive for crowdfunding. But last year, Fuller mentioned that he had been in talks with Warner Bros. about reviving Pushing Daisies as a movie or broadway musical with director Barry Sonnenfeld. This sounds like it could be awesome, but it does leave Fuller fans with a tricky conundrum: Pushing Daisies or Hannibal? We doubt he’d have time to do both.

Technically Torchwood is continuing with audio plays starring some of the original cast, but a true TV renewal depends on a couple of factors: Russell T. Davies and Doctor Who. If Davies were interested in writing a new series, there’s a slim chance he could get it off the ground at Starz (where the fourth season aired) or elsewhere, but it might not gel with Steven Moffat’s current vision for Doctor Who, which sees very little overlap with the Davies era.

Fans may have to resign themselves to audio plays and tie-in novels—which is more than many other shows ever get.

Joss Whedon’s definitive addition to the space western genre got canceled after just one season. But it hasn’t been forgotten.

Firefly’s legion of browncoats started demanding a new season as soon as the show was canceled in 2003, and haven’t stopped since. The cast returned for the 2005 movie Serenity, but a second reunion grows less likely with every passing year. While everyone involved has fond memories of the show, their careers are going so well that scheduling would be incredibly difficult.

The main sign of hope is Whedon’s departure from Marvel Studios. With more time on his hands, maybe he’ll decide to work the same magic that got an all-star cast to film Much About Nothing in 12 days.

Fans are desperate to see this cast team up again, but will it actually happen? Following the success of Netflix’s Wet Hot American Summer revival, a reunion seems less impossible than it once did.

Rogen said in 2013 that he’d be happy to return for a sequel, and we’re guessing James Franco would be up for it because he’s basically up for anything. However, Paul Feig said there were “too many pitfalls” to risk resurrecting a cult series like Freaks and Geeks. In particular, it’s hard to imagine how the original’s awkward-teen comedy style could be continued now the actors are nearing middle age.

It’s the least popular (but most recent) of all the Star Trek series.

Despite Enterprise’s woeful reputation compared to Star Trek’s other TV efforts, there’s still an ongoing campaign to get it renewed for a fifth season. More than 50,000 people have joined an active Facebook group demanding a Netflix revival after 10 years off the air, and actor Scott Bakula has said he’d be happy to do another series. In a similar vein, Michael Dorn (Worf from The Next Generation and Deep Space 9) still wants to launch his own solo series.

Neither of these projects are ever going to happen. If Star Trek does return to the small screen, it will be in the form of a new series, not the reprisal of this one.