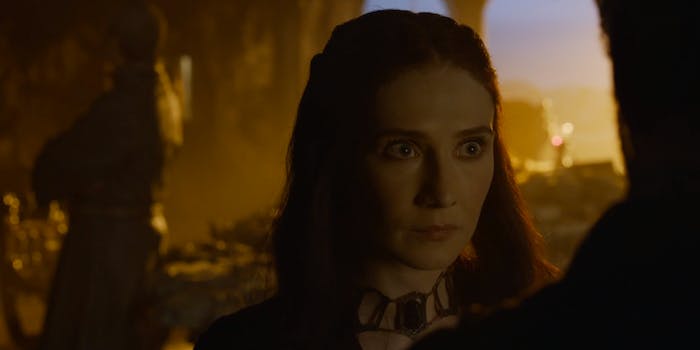 There’s plenty for Game of Thrones fans to look forward to, but the latest dispatch from the Three-Eyed Raven still wants us to look back.

Just as we finally got more information on those IMAX screenings promising a season 5 trailer, the Three-Eyed Raven—a viral marketing ploy from Game of Thrones and HBO—sent out another couple of “visions” to fans through text message and Twitter DMs. And, like the versions of the Sight that we’ve gotten before, they’re just as confusing and vague as ever.

What can we gauge? Not much aside from the lack of new material. But perhaps what we’re being shown will hint at what’s to come.

For instance, the trailer shows a glimpse of Melisandre staring at Jon Snow across the flames at Castle Black. In A Dance With Dragons, the Red Priestess tries to find Azor Ahai in her flames, a legendary hero prophesied to be reborn but only sees Jon along with some troubling visions surrounding him. It’s possible that Game of Thrones may pick up that storyline down the road.

A second teaser has popped up, but video of the Sight has yet to surface online. A reader going by the name Greatjon of Slumber told Watchers on the Wall that it was Arya-centric with a voiceover from the long-gone Braavosi swordsman Syrio Forel, along with some other details.

–the damned raven in close up again
–shots of the water, likely the port in The Children
–Arya, sword out, standing over Polliver
–more damned birds
–Arya standing, back to us, at the doors of the House of Black and White

Having already discussed Arya’s role in season 5, this appears to be more of the same. Along with the coin shown in the first trailer, we’re bound to see plenty of Braavos and the inner workings of the city—and the House of Black and White. We get it.

By Jan. 29 we’ll have a full trailer. Will it stop the Sight? We can only hope.

H/T Watchers on the Wall | Screengrab via HBO Go