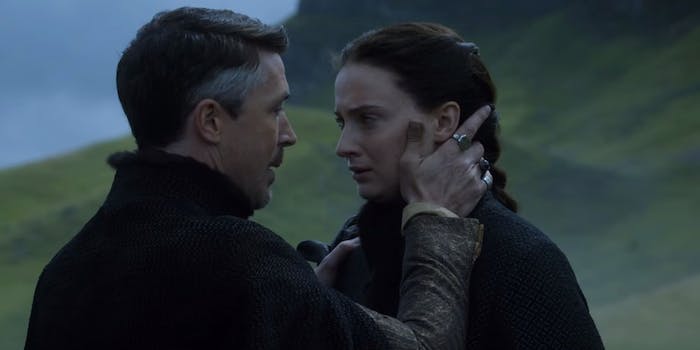 If the latest Game of Thrones trailer is any indication, one major character is about to get her sweet revenge. If true, it would be a big deviation from the books. Naturally, it’s got lots of fans talking.

For two of the Stark children of Winterfell, the family on which Game of Thrones is centered, their plot as written in George R.R. Martin’s A Song of Ice and Fire series has largely run out. Bran Stark, for example, is sitting out season 5 after spending most of the previous season walking toward a tree.

Eldest daughter Sansa Stark has run out of plot as well, but she’ll still be a major player in the upcoming season. We’ve been told that she’ll be getting a new storyline with Petyr Baelish, or Littlefinger, and we’ve seen glimpses of her new story in the season 5 trailers.

The latest video, which debuted during Monday’s Apple Watch event, fueled the fan theory of what Sansa would be doing even further: She wouldn’t be staying at the Vale. She’ll be returning home to Winterfell.

With eldest Stark brother Robb dead, Bran beyond the Wall with the Three-Eyed Raven, Rickon safe with Osha in the North somewhere, and Arya off to Braavos (and assumed dead), Sansa—as the last Stark standing—is the presumed heir to Winterfell. She’s also a wanted fugitive for her presumed role in King Joffrey’s murder, so she’s disguised as “Alayne” and passing as Littlefinger’s bastard daughter.

In the trailer, as noted by Vulture’s Nate Jones, you can spot Winterfell in the background. The door featured in the room where Sansa takes a bath is the same design as other Stark doors. The castle in which soldiers ride also looks a lot like Winterfell.

A redditor compiled this image for massive fan-theory hub r/ASOIAF: 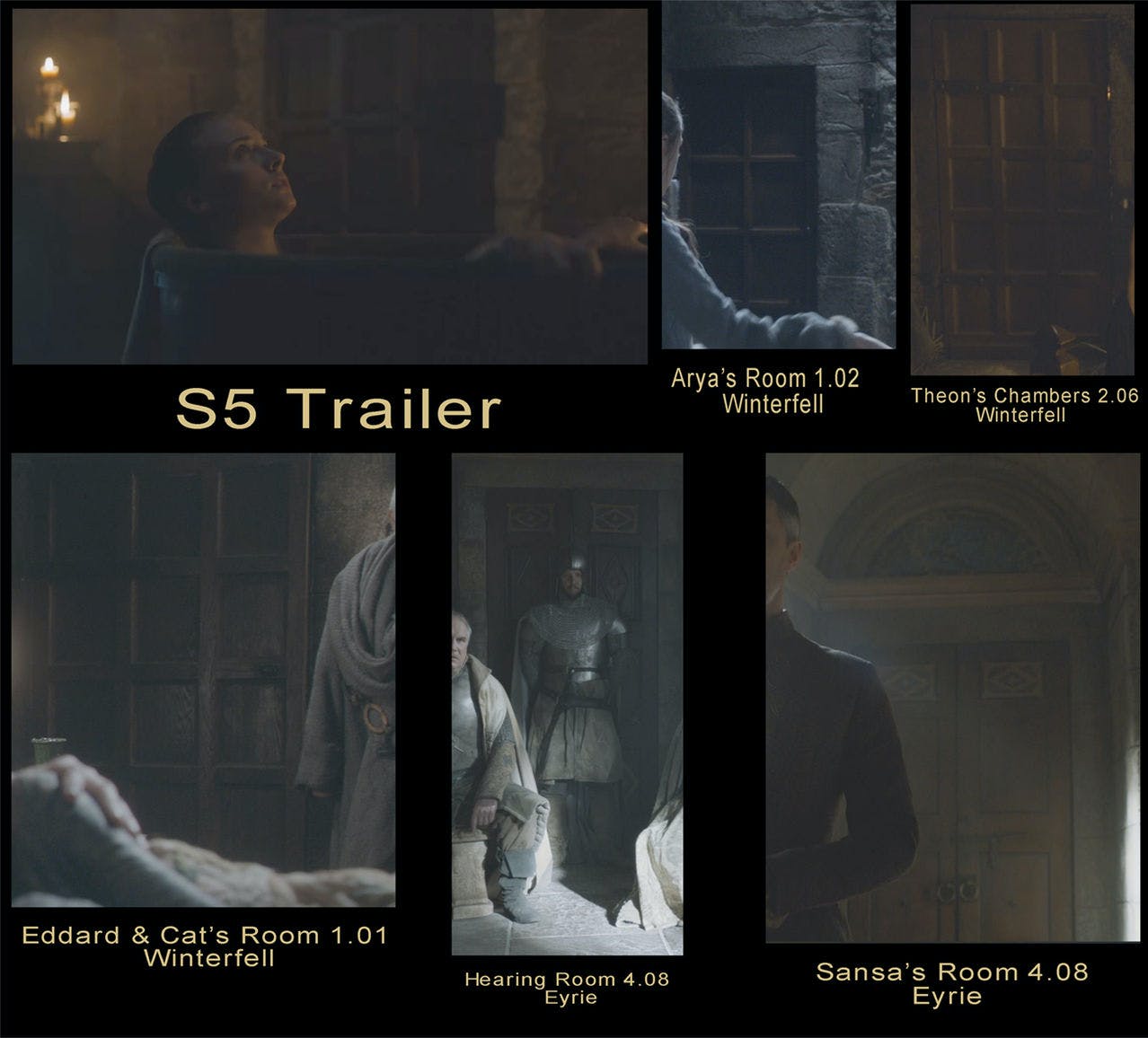 So what is Sansa doing there? (Warning: Book spoilers ahead.)

She’s not going to Winterfell to take back her home, at least not yet. She, Littlefinger, and the soldiers in the Vale will likely attend the wedding of evil torturous bastard Ramsey Bolton.

In the first trailer, we hear Littlefinger telling Sansa to “avenge them.” That quote makes a lot more sense in this context.

Wait, someone wanted to marry that psychopath? Well, not really. In A Dance With Dragons, the fifth book, the sociopathic Ramsey marries Jeyne Poole, Sansa’s childhood friend, who is pretending to be Arya Stark to further cement the Boltons’ power in the North. Either people don’t care that it’s not really Arya or they’re none the wiser; after all, nobody’s seen Arya in years. (And as you could imagine, married life is hell for Jeyne.) Also, in Winterfell, Sansa will potentially run into another familiar face who could ruin everything: Theon.

Luckily for her (and us), it doesn’t sound like Sansa will be taking over Jeyne’s role. Here’s an alternate theory:

“I think that the Arryns will arrive at Winterfell plotting to betray Roose Bolton and set Sansa Stark up as either the Queen in the North or to supplant the Boltons with Littlefinger’s Stark,” BryndenBFish wrote on r/ASOIAF. “Roose Bolton will rally the northern lords to Winterfell to confront Stannis and witness Ramsay’s marriage to Arya Stark.”

In the books, Littlefinger reveals his long game to Sansa. He intends to marry her to the heir of the Eyrie and “reclaim Winterfell in her name.” This season 5 plot twist allows the show to tell a different story while hitting the points of ADWD without too much disruption from the books. And we all can get behind Dark Sansa.