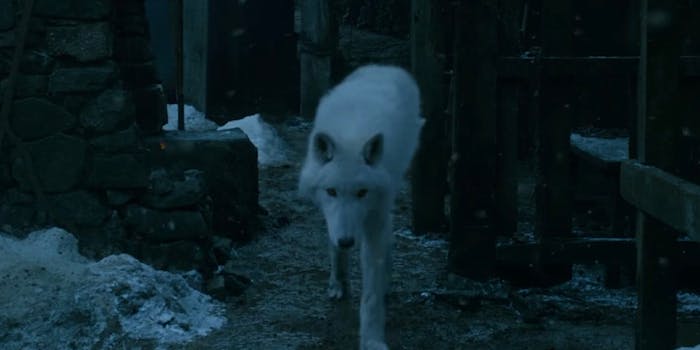 The ‘ghosting’ will come to an end—but at what cost?

Game of Thrones is, among many things, a stressful show to watch. In between betrayals, battles, and bouts of incest, fans can count on their favorite characters being mercilessly slaughtered whether they’re barely onscreen or are prominent leads.

Jon Snow’s direwolf was conspicuously AWOL in season 7, despite a notable appearance from Arya Stark’s furry companion, Nymeria. But in a recent Huffington Post interview, Game of Thrones visual effects supervisor Joe Bauer said that Ghost has “a fair amount of screen time in season 8.”

This might initially seem like great news. Unfortunately, fans have begun to realize that while Ghost’s absence left a wolf-sized hole in all our hearts, he may have been safer behind the scenes. Bringing him to the forefront of the action might solidify his place on the list of beloved characters slated for death.

If they do that it will only be to completely destroy his ties to his Stark heritage. Other than Arya, Sansa, & Bran everything else tying him to the North has been ripped away from him. His crown as KitN, his identity as Ned Starks son, & now Ghost. #HouseStark #atimeforwolves pic.twitter.com/OHKMS6yozl

On the bright side, even if everyone’s favorite direwolf is doomed, at least he’ll probably go out in a blaze of glory. Bauer told the Huffington Post that Ghost is “very present and does some pretty cool things in season 8,” which bodes well for the poor pup. After all, between the White Walkers, the newly-created ice dragon, the treacherous Lannisters, and a much-needed Stark-direwolf reunion, there should be plenty of action to go around.