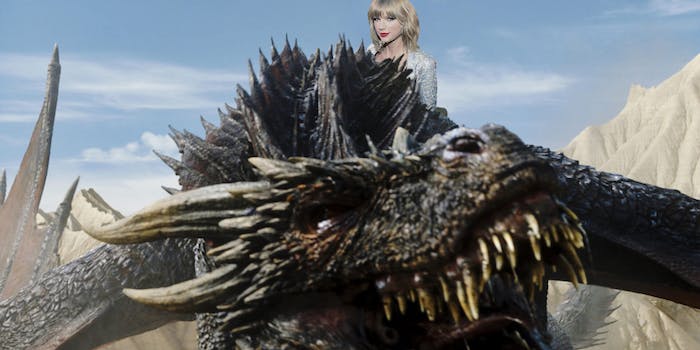 She relates to one character in particular.

Taylor Swift is on the latest cover of Rolling Stone, where she opened up about the past few years, women in the music industry, aspects of her songwriting process, and how she’s often reacted to criticism in the past. But she also has some insightful thoughts about one of the other big pop culture touchstones of the past decade.

Swift, like millions around the world, is a big Game of Thrones fan. Earlier this year, she revealed to Entertainment Weekly that several songs off Reputation were “half based on what I was going through, but seeing them through a Game of Thrones filter”; “Look What You Made Me Do” includes the line “list of names” while some season 7 plot points trickled into the album. She also credited the series for helping shape her “entire outlook on storytelling,” including the inclusion of cryptic messages for fans in her songs.

When asked about the divisive Game of Thrones series finale, Swift compared the end of the show (or any show, really) to a breakup, noting that part of the backlash to the finale was due to people reacting to the fact that it was ending.

“I’ve spent a lot of time thinking about this,” she said. “So, clinically our brain responds to our favorite show ending the same way we feel when a breakup occurs. I read that. There’s no good way for it to end. No matter what would have happened in that finale, people still would have been really upset because of the fact that it’s over.”

Although several of the characters on Game of Thrones influenced her last album, Swift found a particular kindred spirit with Daenerys Targaryen, seeing aspects of what she and many women who find success in her story. She also pointed to the backlash against Alex Morgan celebrating a goal during the Women’s World Cup as one real-life example of successful women being criticized for acknowledging their own success.

“People love new female artists so much because they’re able to explain that woman’s success,” she said. “There’s an easy trajectory. Look at the Game of Thrones finale. I specifically really related to Daenerys’ storyline because for me it portrayed that it is a lot easier for a woman to attain power than to maintain it.”

Swift isn’t referencing Dany’s more murderous tendencies (she “didn’t want Daenerys to become that kind of character”), but she chose to look at the bigger picture: Dany had support while she conquered Essos and Westeros itself, but some of the people who followed her became uncomfortable with her methods and plans for ruling the Seven Kingdoms.

She also sees the parallels to how Dany was treated in the show with aspects of her own career, how women in power are treated, and how she’s absorbed criticism over the years.

“I mean, watching the show, though, maybe this is a reflection on how we treat women in power, how we are totally going to conspire against them and tear at them until they feel this — this insane shift, where you wonder, like, ‘What changed?’” she said. “And I’ve had that happen, like, 60 times in my career where I’m like, ‘OK, you liked me last year, what changed? I guess I’ll change so I can keep entertaining you guys.’”

You can read the full interview at Rolling Stone.