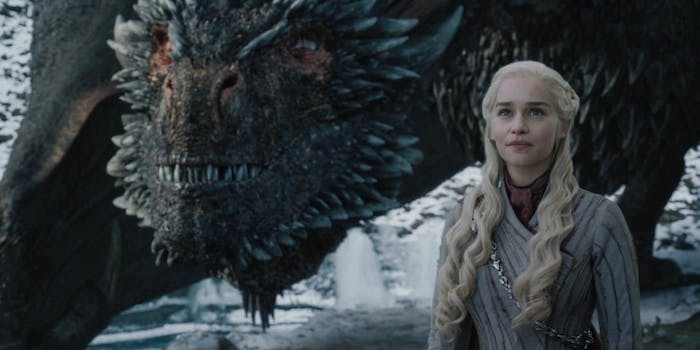 George R.R. Martin clarifies some things about the ‘Game of Thrones’ Targaryen prequel

The title of it isn't an obvious choice.

Last week, a new report revealed that HBO was close to ordering a Game of Thrones pilot centered around House Targaryen, the second prequel series being pursued by the network after the Age of Heroes series moved to the pilot stage. But now that we’ve had time for the news to sink in, George R.R. Martin offered a few clarifying points about the project.

In his latest blog post, Martin confirmed that the Targaryen prequel from Colony creator Ryan Condal was one of the three shows still being considered as potential Game of Thrones spinoffs. (Jane Goldman’s Age of Heroes series is another.) And although he couldn’t reveal the show’s title, he did reveal a few key factors about the series.

For one, Condel’s show will be about the Targaryens. It will be based on material from Fire and Blood, a Targaryen history book that encompasses the family’s early reign in Westeros, although it won’t have “the obvious title.” And the most important thing: at least one magical creature will make an appearance.

“I can say that there will be dragons,” Martin wrote. “Everyone else has said that, so why not me?”

Martin noted that Fire and Blood “contains enough materials for a dozen shows,” so although he pointed fans in the direction of his latest book, it doesn’t necessarily narrow down what the show will entail. But the two events that bookend Fire and Blood, Aegon’s Conquest and the Dance of the Dragons, are obvious contenders.

Martin also offered plenty of praise for Condal, who he first met when Condal filmed a fantasy western pilot in New Mexico that was never picked up (but Martin eventually screened at his movie theater in Santa Fe).

“He’s a helluva strong writer, and a huge fan of A SONG OF ICE & FIRE, Dunk & Egg, and Westeros in general,” he said. “I’ve loved working with him, and if the Seven Gods and HBO are kind, I hope to keep on working with him for years to come on this new successor show, the title of which is… Ooops. Almost slipped. Can’t say yet.”

But Martin’s post also serves as a kind of update on Goldman’s series, at least in the fact that he confirmed it’s still very much alive at HBO; the pilot is in the midst of post-production, although he has yet to see it for himself. But he highlights something more important: HBO can develop more than one Game of Thrones series at a time, and it’s possible that they might end up on TV together.

The world of Ice & Fire is a WORLD, boys and girls,” Martin said. “Huge continents, ten thousand years of history, cities, deserts, oceans, mysteries, triumphs and tragedies.  If there were indeed eight million stories in The Naked City in the 50s, surely there are eight billion stories to be told about Westeros, Essos, Sothoryos, and the lands beyond the Sunset Sea, south of Oz and north of Shangri-La… And in these days of a hundred networks, channels, and streaming services, I think television has plenty of room for two shows set in Westeros… or hell, maybe three or four.”