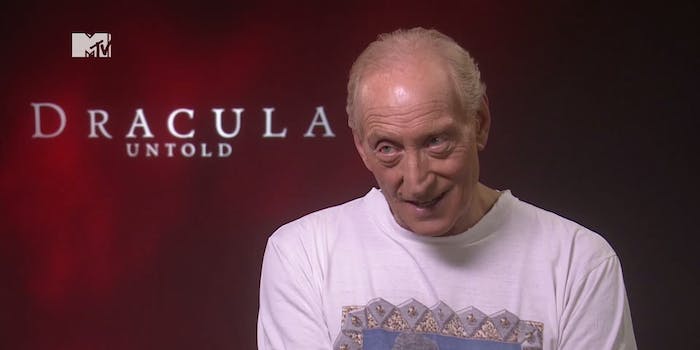 You haven't seen the last of Tywin Lannister.

Warning: This article contains minor spoilers from Game of Thrones and A Song of Ice and Fire.

What is dead may never die on Game of Thrones, and that may even include one recently-departed character.

The last time, we saw Tywin Lannister he was sitting on the privy with a couple arrows in him, courtesy of his son Tyrion, but according to a recent interview with MTV UK, we haven’t seen the last of the Lannister patriarch.

While doing press for Dracula Untold, MTV asked Charles Dance about Game of Thrones and his character’s demise. Instead of merely lamenting not being on the show before, Dance dropped a nugget not many of the fans were expecting.

“Well, I’m not completely missing out on the next season,” he said. “More than that I’m not going to say. You haven’t seen the last of Tywin Lannister, is all I’ll say.”

We recently left Tywin slowly dying in perhaps the most humiliating death scene in recent TV memory. While we never saw the body, rest assured that Tywin is as dead as a doornail, and his death, like many before him, has huge ramifications in later books.

So, with this in mind, what exactly will Dance be doing in season 5? We break down the possible scenarios:

Jack Gleeson did it after Joffrey’s death, so it’s very likely that Dance could as well. Nobody is shown discovering Tywin’s body—although, from the bells heard in King’s Landing, we presume he was found dead. The deaths of powerful men in Westeros are accompanied by elaborate funerals. Tywin’s body is shown for seven days before being taken back to Casterly Rock. Here’s hoping that fans will get an Easter egg from the book: an allusion to the fact that “Lord Tywin Lannister did not, in the end, shit gold.”

2) He could be in a flashback or dream sequence

Game of Thrones doesn’t normally do flashbacks, but if a leaked casting call is any indicator, we may finally get one this season. In a scene that could either work as a flashback or a dream, a younger Cersei meets a fortune teller from Lannisport. Tywin isn’t specifically in the scene in the books, but as her father he certainly could be.

Or could Tyrion possibly dream of his father in guilt?

3) He’ll be a hallucination

Various reports have confirmed that a crucial (and controversial) scene from A Dance With Dragons will take place—mainly due to the local church in Croatia trying to pressure the Croatian film commission to deny the crew the proper permits to film, eventually reached a compromise where part of the scene would be filmed on a built set. In that scene, Cersei sees someone who reminds her of Tywin in the crowds, and he’s not the only person she thinks she sees.

“A bald man with bushy side-whiskers frowned down from a window with her father’s frown, and for an instant looked so much like Lord Tywin that she stumbled.”

If it wouldn’t take away from the scene, Dance could very well pop up there for a moment or two before vanishing.