You’ve never seen video game controllers like these before

Think you need a control pad or a keyboard to play video games?

A bunch of mad-scientist developers at the 2015 Game Developers Conference just proved you wrong. From a single strand of LED lights to a pair of wired-up gloves, nearly anything can be made into a game.

GDC always makes space to highlight bona fide innovation in gaming. This is exemplified by ALT.CTRL.GDC, an exhibition of DIY wizardry that features unique ways to control gameplay. We chose the five entries from the show that best demonstrated what ALT.CTRL.GDC is all about. 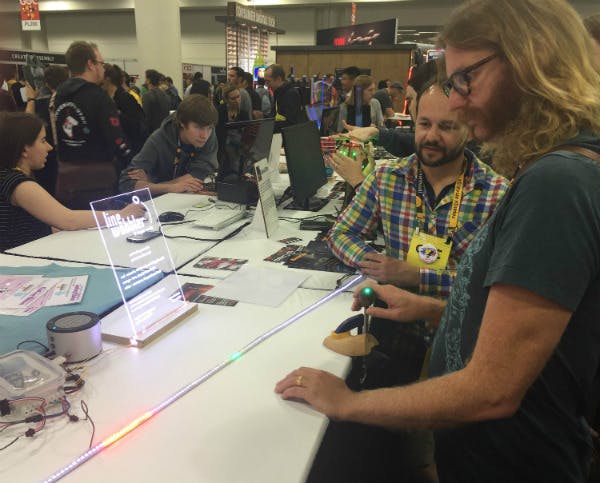 This year’s star, without a doubt, was Line Wobbler. The game is described by Robin Baumgarten, a photographer and indie game developer from London, as a “one-dimensional dungeon crawler.”

The player controls a green dot using a controller attached to a shoehorn spring. Red dots are enemies, lines of yellow dots are lava, and strobing white dots are conveyor belts that push the player forward.

When the player releases the controller, the green dot turns yellow and “wobbles” back and forth on the LED strip. If a red dot touches this wobbling line of yellow dots, the red dot is “killed.” This video shows you how the game is played.

DodecaLEDron, created by indie developer Alan Zucconi, is a dodecahedron-shaped controller lined with LEDs. Users play games by holding their hands over specific segments of the controller, with each segment tied to certain functions. 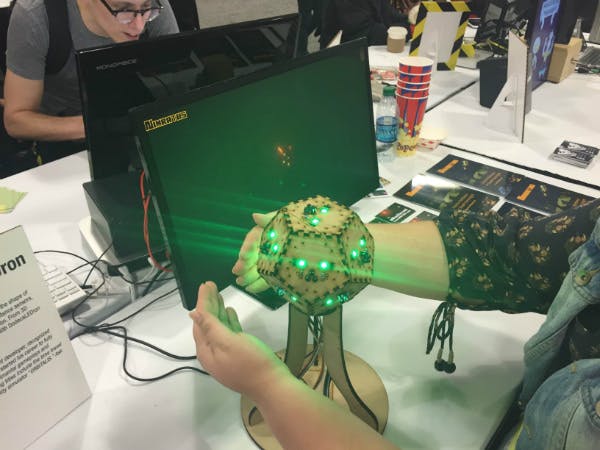 At the ALT.CTRL.GDC exhibition this year, the DodecaLEDron was paired with an inde game called Nimabtus. In Nimabtus, the player controls a drone as it blasts its way through obstacles in space.

In the demo, the lower set of the DodecaLEDron’s panels controlled the ship’s thrusters, and the upper set controller the ship’s guns. Here’s what the game looks like in action.

Spacebro Justice Rocket was created by Nick Kornek and Louis Sciannamblo during Critical Hit 2014—a game jam that specializes in experimental designs. The game is played with two people, each of whom wear an elbow-length glove fitted with pressure sensors on the knuckles, palm, and forearm. 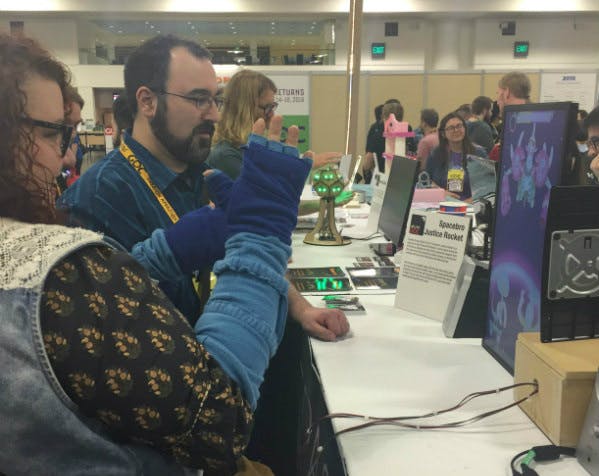 Spacebro Justice Rocket plays like rhythm games like Rock Band or Guitar Hero. The players are law enforcement agents in the far future who harness platonic energy to fight the bad guys by following on-screen prompts to fist-bump, high five, or bump elbows.

A.F.T.E.R.G.L.O.W. was one of the strangest—and most awesome—games at ALT.CTRL.GDC. Jerry Belich, an indie dev from Minneapolis, took a briefcase, an old rotary phone dial, and a circle of LEDs, and turned them into a post-apocalyptic game about shooting down the last, few nuclear warheads left to rain down over civilization. 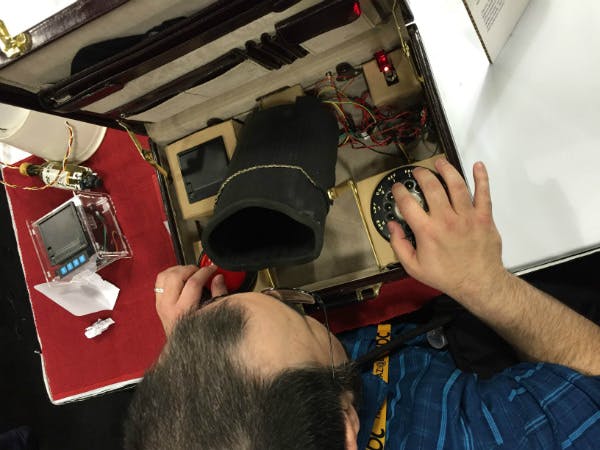 Belich says he was inspired by arcade games like Tempest and Missile Command when designing A.F.T.E.R.G.L.O.W., and he wrapped the game into a 1950s Cold War-era Soviet-technology vibe. In this YouTube video, Belich makes his best attempt at a Russian accent to demo the game. 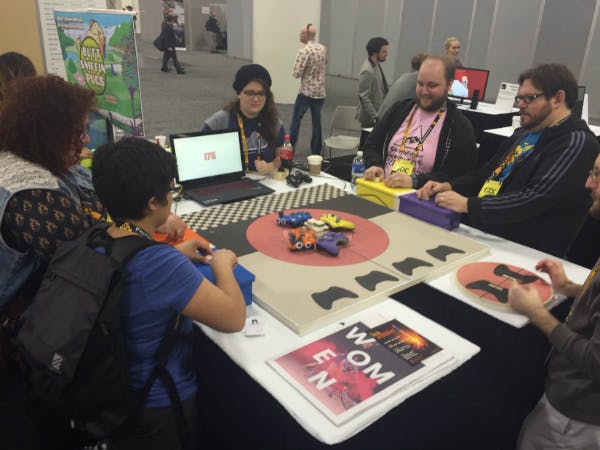 Each Xbox 360 controller is remotely connected to a pair of knobs, one for the left rumble motor and another for the right rumble motor. Players can control the intensity of either rumble motor by way of trying to make the controller turn or move in a straight line.

Deluxe Turbo Racing 360 supports a number of different mini games, like a race from edge to edge of the game board, a game where players have to push Lego blocks out of a circle in the middle of the board to score points, and a Sumo-style minigame where players try to push each others’ controllers out of a ring.

What makes all the games of ALT.CTRL.GDC special (and not just the five we chose as our favorites) is that the same spirit of play embodied in the final products is the same spirit that led to their construction. Exhibits like these are partially what define the Game Developers Conference.

When game designers throw caution to the wind and let their creativity run wild, these are the sort of awesome games they come up with.