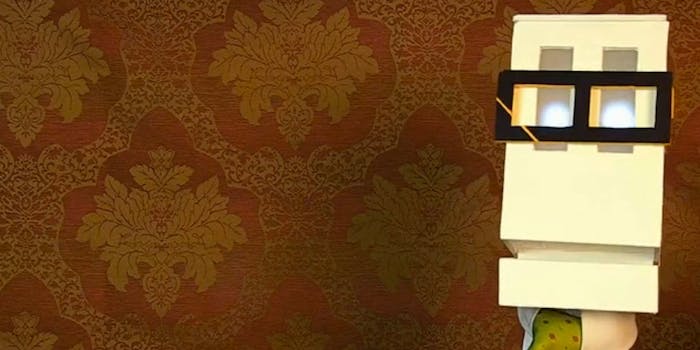 Only a puppet can explain Gamergate

Just like on Sesame Street, things make more sense when they come from a puppet.

Sometimes, the most innocent character can convey the strongest message. Sesame Street showed us what it’s like to have a parent in prison. Chip ‘n Dale’s Rescue Rangers gave us one of the best lessons about cult worship.

And with Gamergate, we have Foldy the puppet. Though he might look like a cute puppet with thick-framed glasses, his message is anything but childish.

Educational web series Folding Ideas has come out with one of the most comprehensive and thought-provoking videos about Gamergate since it started. It goes past the back-and-forth and really dives into the heart of the matter: Why Gamergate is here in the first place.

Olson is the man behind the puppet. He started the media education series in 2009 while working as a teacher’s assistant, only there was no puppet back then. After choosing to continue the series, he added Foldy to give the videos something unique. But he said Foldy is not a persona, just an accessory.

“It is my voice,” Olson said. “Foldy is not a character, it’s not a layer. His voice is my voice.”

In the video, Olson goes into what he says are a gamer’s “base assumptions” about video gaming as a whole. Mainly, he said gamers think that people aren’t misrepresented in gaming, and if they are it’s just because the free market is going with consumer demand. Anyone who says otherwise, like feminist critics or game developers, are creating a problem where it doesn’t exist.

Olson said those issues, which make up Gamergate’s core, were around long before August 2014. As far as ethics in gaming journalism, Olson said it is an important issue, but not why Gamergate started. In fact, he said people who joined Gamergate for that reason are being used.

“Once the ethics angle sort of grabbed traction, they were able to draw in some well-meaning people. The angle of ethics in journalism appeals to them,” Olson said. “Those people who came to latch onto it have only served to deflect criticism from the core of the movement.”

Olson said his biggest concern with Gamergate is that it allows and justifies harassment. Some of his own friends and colleagues have been harassed.

While he agreed that most people involved in Gamergate are not harassing people, he said they’re benefitting from the fear it’s causing among critics, mainly women and minorities. And as more major news organizations and celebrities speak out on Gamergate, he said the movement is getting closer to the point of no return.

“We’re at this impasse. By and large, the curtain is being pulled back on the harassment, on the ideological roots,” Olson said. “So, the important productive conversation now is damage control. I don’t mean that in a [public relations] terms, I mean that in individuals. There are, more or less, innocent people who’ve been swept up in Gamergate.”

Olson said the best step is for Gamergate to “go away” and be replaced with a better conversation about ethics in gaming journalism. One that focuses on major publishers and marketers instead of female indie developers and critics.

“Gamergate in and of itself is so laden with toxicity,” Olson said. “As a thing, as an individual brand, it needs to go away.”

In the meantime, Olson said he plans to release more videos that continue on themes in his Gamergate video. His first will be to talk about the idea of masculinity, and how not having a “strong, flexible definition of masculinity” can cause an identity struggle.

Disclosure: Beth Elderkin and Dan Olson are both independent contractors with Channel Awesome.