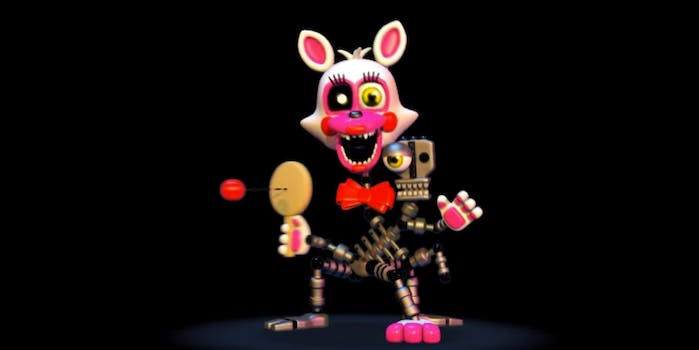 Your childhood nightmares are back, just in time for Halloween.

Last year, the hellish nightmare that is Five Nights at Freddy’s made a huge splash among gamers, horror fans, terrified children, and anyone who’s ever walked into a Chuck E. Cheese pizzeria and thought: WTF?

Now, Freddy and his crew of demonic giant animatronic toys are back, just in time to scare your socks off for Halloween… or not. The trailer for the latest installment in the Freddy’s franchise, Five Nights at Freddy’s World, debuted last night from creator Scott Cawthon, and this time we’ve entered the Uncanny Valley of cute little animated things that may still want to rip your face off, but mostly seem content to shoot other cute things in this roleplaying game throwback.

This game looks nothing like the previous installments in the series. “Jump scare” is no longer an actual gameplay element—it’s the name of a weapon to use against your enemies. But given that Warner Bros. is making a Freddy‘s movie, it’s possible Cawthon’s plan all along was to move the franchise in a more family-friendly direction.

Will fans who lined up for diabolical serial killer Freddy and friends return for this more jocular sequel? We’ll find out when the new game lands next year.

In the meantime, fans can look enjoy to a major update to the series’ latest version, which was released today.