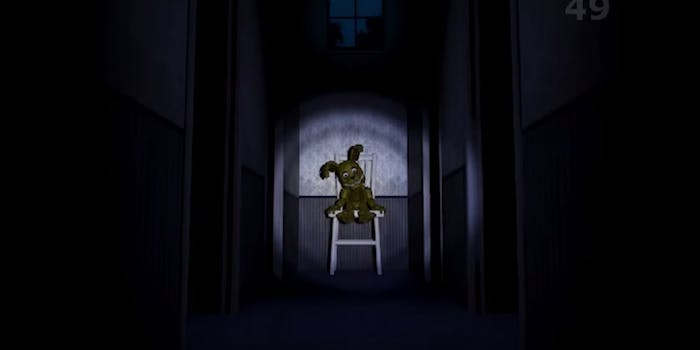 It’s not about pizza parlors and amusement parks anymore.

The murderous, animatronic characters that freaked you out in Five Nights at Freddy’s are about to follow you home.

The first two installments of the game had you on the overnight shift at Freddy Fazbear’s Pizza while dead-eyed creatures lurked in the darkness. The third game in the series took place at Fazbear’s Fright, a horror theme park built over the remains of the pizza parlor. You know how Poltergeist taught you that building houses over graveyards is probably a bad idea? The same wisdom holds true for building theme parks over the scene of murders committed by evil, cuddly robots.

Five Nights at Freddy’s 4 takes place in your house, which might be the creepiest proposition of all. This is a whole new take on checking the closet and under the bed for monsters. You really don’t want to allow your kids, or nieces or nephews, or any children, really, to see this trailer. Not if you don’t want to deal with hysterically crying children for a few days, when you tell them to go to sleep.